More than eight years ago (Dec. 8, 1999, to be exact), I wrote a feature story in The Freeman newspaper on a young triathlete named Chris Aldeguer. At that time, Chris was less than two years into the sport and, as we look back now, would continue to compete in triathlon for three more years and eventually join 100 races. I dug through my files and, good news, was able to find that Dec. 8, ’99 interview. So here it is… 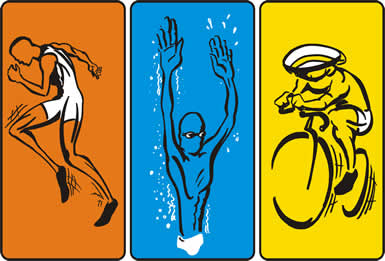 Chris Aldeguer is by no means an ordinary athlete. The 24-year-old youngest son of Cebu’s acknowledged Godfather of Sports, Antonio Aldeguer, holds a key position in the family-owned business. He’s VP for Marketing of some of the country’s most recognizable brands: Loalde, Islands Souvenirs, Wacky, USA Sports, Bisaya Ispisyal. The fact Chris still has time for sports is, in itself, amazing. But mind you, what’s most extraordinary is Chris is not just into any sport, but the ultimate of sports: Triathlon. Here’s his story, I’m sure it will inspire you….

How and when did you start?

I started training for Triathlon late last year, 1998. I got a Swim coach to help me then. What was difficult was having to integrate training for all 3 sports. At that time, I did not know so much how to make my Training Program. I also had to borrow a bike during training. The only thing I was comfortable with was my run. Usually, athletes who get into Triathlon have backgrounds of any of the three sports: Swimming, Cycling, or Running. That was my disadvantage at the start. I was a basketball player and did not have any background on these three sports.

Why choose such a killer sport?

Well, triathlon requires discipline, and determination and that was something I was sure I had. Also, I was into fitness all my life, and I was looking for something that would maximize my mental and physical capabilities towards Strength, and Endurance. Triathlon was the answer. The reason Triathlon attracts me is the way it makes you challenge yourself. What you put in, is what you get in result. Triathlon is not just a sport. Triathlon is a lifestyle.

Who are some from Cebu with you?

Well, there are several Triathlon teams in Cebu such as Tri Locos, Rambo, UTA, and some more. I’m with the Tri Huevos team which is very close to the Tri Locos. We often train together. Well, there are a lot of good triathletes here in Cebu, but I would say the good ones who are active now would be Abet Biagan, Eugene Sanchez, and Ian Gonzaga of the Tri Locos team.

Explain the different types of triathlon. 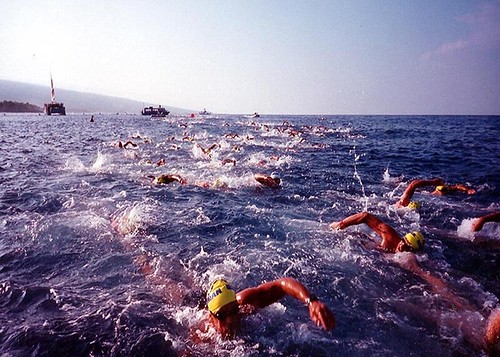 What events have you joined thus far? Upcoming ones?

I’ve joined several races in Cebu such as in Catmon, Plantation Bay, Sibonga. I also did the Davao, Subic, Alabang, and Batangas race. And recently, in Hong Kong. The memorable ones would be my first (Catmon), and the Sibonga race where I placed 7th overall among Cebu Triathletes. But the biggest race I would say would be the Half-Ironman in Batangas. Even if I performed way below my expectations, it still is the most memorable one because of the pain I had to take to finish that race. It was a very cruel race. I definitely will join the Nationals in Dumaguete, and the Sinulog Race in Mactan this January.

The Half-Ironman race in Batangas, held last November 13, included three back-breaking phases: a 2k swim (that’s 80 Olympic-size pool laps!), a 90k bike (from the city to Bogo!), and a 21k run (from here to Compostela!). Did the thought of quitting ever enter into your mind?

To be honest, no! I came in the race being very mentally prepared and focused. I knew and heard so much about how tough the race was going to be. That made me prepare so much mentally and physically. I knew I could never forgive myself if I failed to finish the race. This is the longest race in the Philippines and it only comes once a year. I just had to do it. I did set some time goals for this race which I failed to get. Normally, if I don’t?meet my time goals, I treat it as a disappointing race, but this one, despite such, is still my best and most memorable race. The race was very cruel from the heat to the hilly course and above all, the distance.

You’re a busy person. How do you juggle between work and training?

Pretty much, I don’t do anything else but work and train. Very rarely do I go out. I usually train during lunch breaks, and right after work around 5 to 7 pm. and, of course, I devote my whole Sunday to training.

You practice during lunch break, how? Which one of the three do you practice then?

Swim. From the office, I go straight to the pool, then after, go right back to the office.

How do you prepare for an event, and for how long?

It really depends on two things. First, if it is my priority race, and second, depending on the distance of the race. Just like the Half Ironman I did in Batangas, I prepared 4 months for that race which is not really enough to perform very well because of the distance of the race. Also, I plan to peak for two races this January. The Sinulog Triathlon, and the National Championships which I now have 2 months to prepare. Basically, training is a whole year thing but during off season, rest is required.

The upcoming Sinulog event is billed as RP’s biggest ever, why?

Well, I guess because of several factors such as it being an International Event, and having large amount of cash prizes. These are what the Organizers have projected it to be. Also, there has been so much preparation for this event. I believe it will really be successful. This event is being organized by the Tri Locos team.

Any special diet for you?

Yes, Eat often! We need all the energy. Carbohydrates is a must for Triathletes.

What’s the most difficult part in the race, and your personal strength?

It really depends on the strength and weakness of a particular Triathlete, but usually, its the run that’s the most lethal, because of it being the last part of the race. Well, at this point, I try to be a very balanced Triathlete. Initially, the run was my strength, but now, I’d like to think that I’m fair with all three.

Name the three most important qualities of a world-class Triathlete.

The physical aspect is, of course, highly important. But how about the mental part?

I would say equally (important). Without each other, you don’t stand a chance.

Any advice for future triathletes?