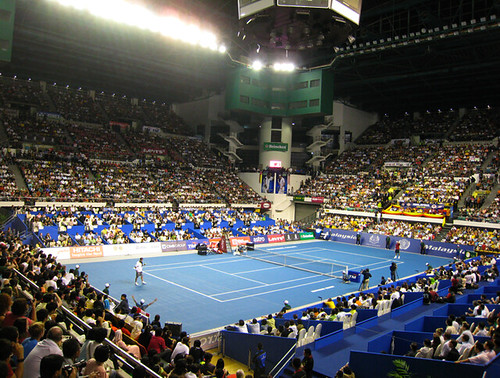 KUALA LUMPUR—I’ve always been a Pete Sampras fan. And so three nights ago, when we watched him clash with Roger Federer in the “Clash of Times” exhibition match here in Malaysia, I cheered for Pistol Pete. Same with seven others in our group: Rene Ven Polinar, Mark Aseniero, Charlie, Mitzi and Jasmin Pages; Dr. Ronnie and Steph Medalle—all Sampras fans.

The ones who rooted for Mr. Federer? From our group of 10? Two ladies who brought a specially-printed, hand-carried-from-Cebu “FEDERER FOREVER” banner: Michelle So and Chinggay Utzurrum.

And so we screamed, “Go, Sampras!” When Pete buried a 217-kph ace, we rose from our seats. When he attacked the net and banged a volley winner, we shook our heads in disbelief at this 36-year-old, half-balding American who’s five years retired.

But, as many of you saw on SkyCable’s channel 45 last Thursday night, we know how the match ended. As high-level as Sampras’ performance was—he never lost his serve the whole match—he still, as expected, lost.

For here’s what I realized: While Sampras is The Great One, while he possessed a forehand that he could smother anywhere, while he served to seven Wimbledon titles—there stood a player even better… The Greater One. 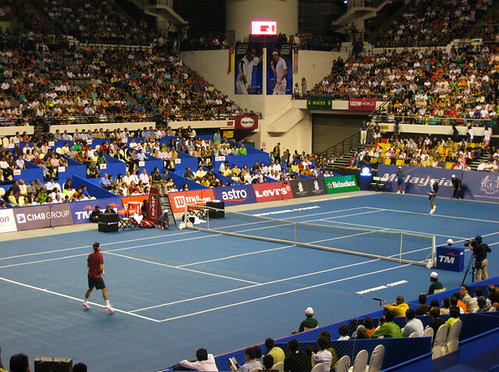 In the match, because it was an exhibition, there were plenty of smiles between the two. Sampras kidded around. He scratched his behind like Nadal, asked a spectator to take his place—it was relaxed, fun—but, at the same time, serious. Pete wanted revenge. After losing 6-4, 6-3 in Korea last Tuesday, he wanted to win. And so Sampras attacked. Serve-and-volleyed. But in the end, Federer stood unbeatable. To best define it:

At the jam-packed Malawati Stadium, who else did I see? Jess and Jacob Lagman (pictured below). They were seated at Row DD, a level very near the court. When I visited them minutes before the start, I could see Jacob’s smile. Here was one of RP’s best juniors about to watch his idol. A moment, I’m sure, the Lagmans will never forget. 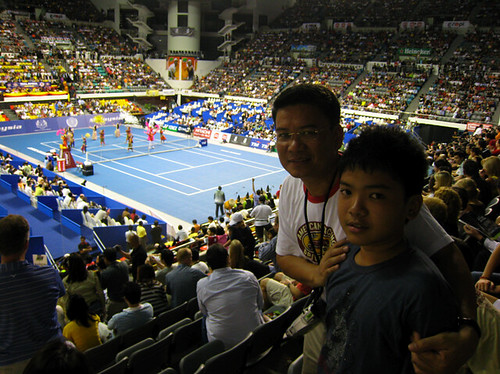 Our gang of 10 Cebuanos? We sat at Row K—not exactly the best seats—just a few dozen rows from the arena’s ceiling. And so after the first set, we did what many of us do back home: we scouted below for better seats. Finding all taken (the 12,000-seater stadium was sold out weeks back), we scurried down and found the next best seats: the stairs. Yes, never mind forgoing the luxury of plastic chairs, we sat on the cemented steps of the aisles. But, instead of Upper Level, we were down at the lower Lower Level—and what a close-up view! 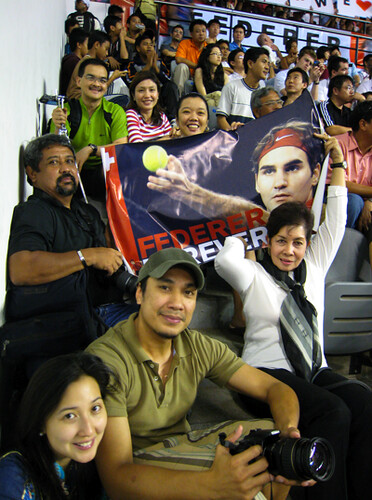 Here’s more: When the match reached the second set, an unexpected moment happened. While majority of the crowd were Roger fans, this time, wanting to extend the match to a third set, thousands cheered for Pete. Like who? Like the self-proclaimed Roger Federer Fans Club-Cebu Chapter president, Michelle So. When all was quiet, she screamed, “GO, PETE!”

In the end, what an ending. Roger won, Pete never lost his serve, the score was 7-6, 7-6, and us, the fans, witnessed two of this sport’s best-ever. 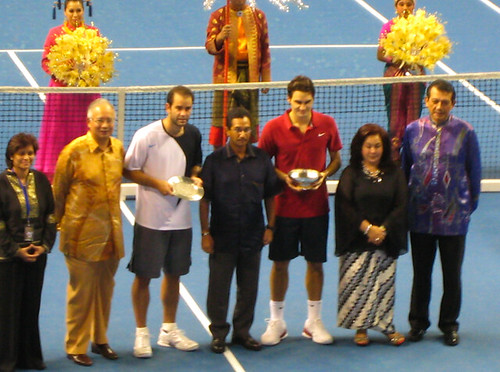 But the thrill didn’t stop there. Because as we exited, Rene Ven Polinar and myself spotted a few official-event Sampras banners that hung on the lamp posts.

“We have to bring home one each,” we said. And so we did.

With no police or security guards watching, we ripped off two from the posts. “The event’s finished anyway,” we justified. “And aren’t we doing them a favor by taking them down?”

Still, as we realized later, that was risky. What if we got caught? On foreign soil?

But, nah, we said after, flying all the way from Cebu to watch Pete and Roger—and tearing down two banners—that was worth it. To the very friendly people of Kuala Lumpur, especially the Malaysian police who looked the other way… Terima Kasih (Thank you)! 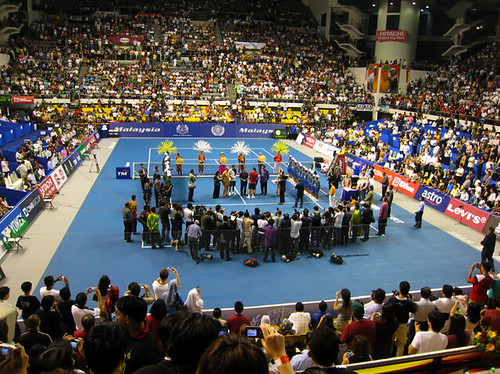