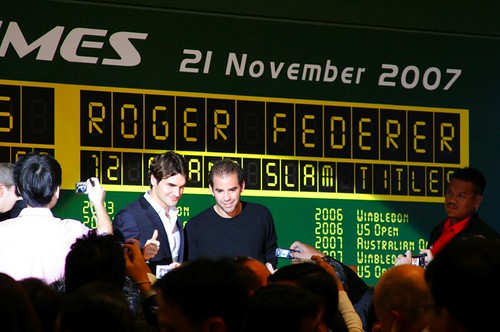 KUALA LUMPUR—Yesterday, when my watch read “3:15,” I knew it was improbable. The exclusive, by-invitation-only Cocktails Party for Roger Federer and Pete Sampras was scheduled at 6 p.m. and, less than three hours shy of that time, I still had not received any confirmation.

WOW! I couldn’t believe it. We were at the IKEA store, 30 minutes away from the hotel, and I had barely two hours left. Plus, I had a problem: I brought no formal attire. So I rushed to buy a pair of leather shoes, bought a Giordano gray T-shirt, and, just as I was searching to buy a black coat, Dr. Ronnie Medalle phones to say that I can borrow his black jacket. Perfect. And so I ran. Got to Hotel Capitol by 4:15, changed, then sprinted to the venue.

The party was held at Shook Bar, a chic and classy resto-bar reserved for the Who’s-Who in Malaysia. It was located at the lower-most level of one of KL’s most luxurious malls, Starhill Gallery. 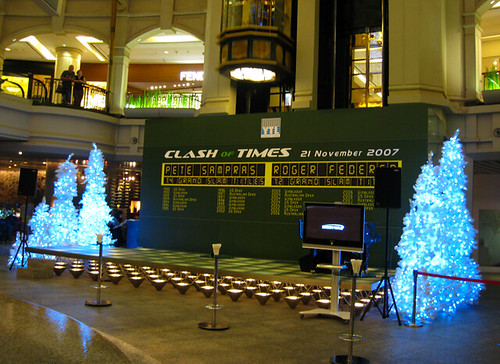 I arrived just in time. And as soon as Suresh Menon, the International Tennis Federation (ITF) official who secured for me that pass, arrived and handed me my pass, I could hardly believe my luck.

Here I was, inside this cordoned area in a swanky Kuala Lumpur bar, an hour away from meeting face-to-face with two tennis greats.

While awaiting their arrival, I phoned my Cebu companions and asked them to rush to the venue to take a peek and snap some photos. And so they did: my wife Jasmin, Dr. Ronnie and Stephanie Medalle, Mark and Ding Aseniero, and five others who had just arrived: my brother Charlie and his wife Mitzi, Rene Ven Polinar, and Sun.Star Cebu’s Lifestyle columnist Chinggay Utzurrum and Executive Editor Michelle So. 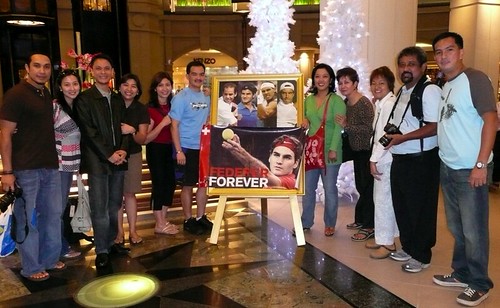 Waiting for Roger and Pete, I was surrounded by Malaysia’s elite—many in coat-and-tie and body-hugging dresses. I grabbed a glass of Heinekin beer (I don’t drink but it was free and I wanted to celebrate!) then just milled around. And, I drew closer to the stage—a move that would prove to be very wise—and talked with a few others who were just as excited.

By 7:15 p.m., the Shook Bar shook. Cameras flashed. Music pumped. Spotlights glared. Then, like movie actors stepping out to meet their crazed fans, Pete Sampras strode down the escalator, followed by Roger Federer, all under a thunderous rain of applause. 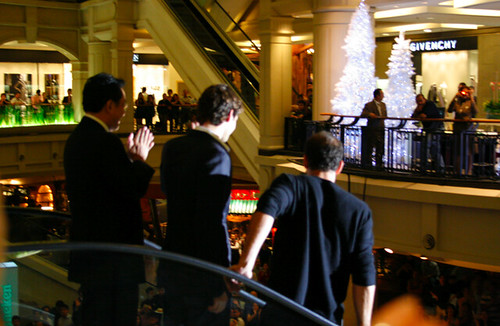 They stepped on the stage. Waved to the crowd. Smiled. And I was 10 feet away! Unbelievable. Here, in front of me, stood THE TWO GREATEST TENNIS PLAYERS OF ALL TIME.

Sampras wore a black sweater, which he rolled up to his elbows. He sported a pair of gray pants and black leather shoes. Federer, obviously the more fashionable of the two, wore jeans and a white polo shirt covered by a black suit.

“It’s an honor for me to be here,” Sampras first spoke. “He’s the best player in the world and he was nice enough to pick me to play him.”“It’s a great thrill for me to play Pete,” said Roger, returning the favor. “I’ve always looked up to Pete when I was young. He was the guy, next to Becker and Edberg, who took away all the Wimbledon titles and I hoped one day to maybe play in Wimbledon.”

Wimbledon? A hard-to-believe thought crossed my mind: These two men have won a combined 12 Wimbledon crowns. 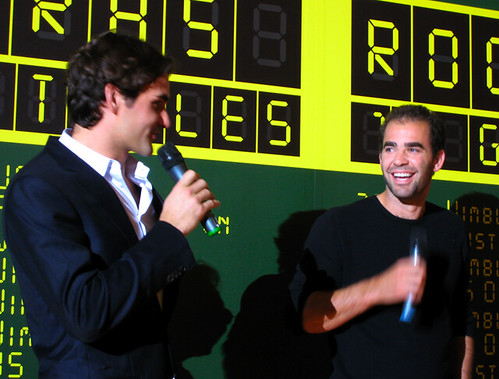 Then, after a few minutes of speaking to the mesmerized crowd, it was the photo session. And they only had time for a few dozen. Good thing—as I mentioned earlier—I stood near the stage.

When my time came up, I was whisked near Sampras, whose hand I shook while saying “Hi, Pete!” We posed for a photo and, like all photo chances with great men, that was one shot I’ll picture in my mind for a lifetime. 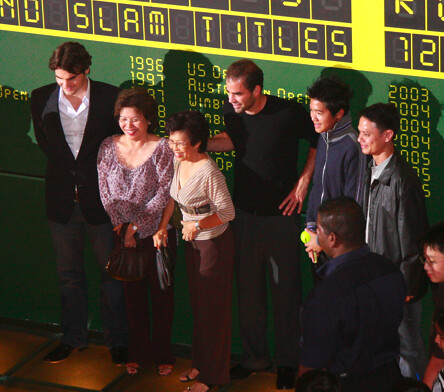 That’s me (right most) with Roger and Pete 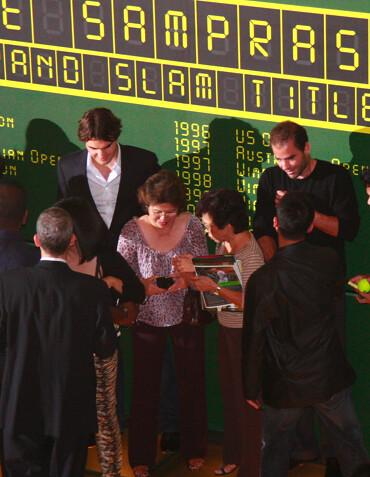 That’s me with back facing… shaking hands with Pete Sampras