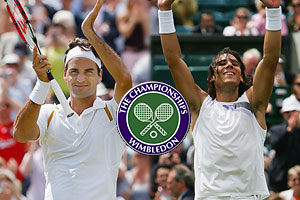 THEY’VE MET 12 TIMES. Rafael Nadal leads Roger Federer, 8-4. But this is Wimbledon. As Boris Becker once said, “THIS IS MY HOUSE.” Today, no, make that for the past five seasons, Wimbledon has been Roger Federer’s home.

Federer’s game is tailor-fit for the coat-and-tie setting at the All-England Club. Though he doesn’t serve 155 mph aces like Andy Roddick, Roger has the most accurate serve in men’s tennis. And he serves his best when under pressure. That’s what champions do, right? And Roger is a Champion’s Champion. Forehand? His is maybe the best of all time. Backhand? I love that cross-court passing shot. Volleys? Smooth. Relaxed. So Federer has got all the weapons in his Wilson racket.

Rafael Nadal? As their head-to-head record shows, he’s beaten Roger two-is-to-one… 8 wins, 4 losses. But we’ve got to count this statistic: out of those eight wins, six have come on clay. And nobody beats Nadal on clay. So taking out those six clay wins, it’s 4-2 in Roger’s favor. And let’s not forget: exactly 12 months ago, on Centre Court at 2 p.m., these two enemies faced each other in England and the Swiss beat the Spaniard.

So don’t miss the fireworks at 9 p.m. over Star Sports tonight. Whether it’s the man with those Nike shoes on, or the one wearing a white bandana on his forehead, I’m sure the champion’s name will start with an R.