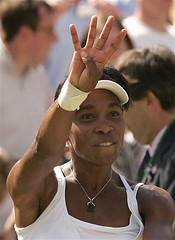 I made a mistake. I apologize. Last week, I picked an “R” to win Wimbledon. Not “R” who’s won six of the last nine Grand Slam singles crowns. And not the other “R” who’s won the last three French Open trophies. I predicted another R to be the King of Grass: Roddick.

I was ‘Rong. Also known as “The Man Who’s Lost To Roger 13 Of 14 Times,” Roddick lost two nights ago. Again. Thus, his dream of standing at the center of Centre Court and carrying that All-England Club trophy is just that… a dream.

The men’s semi-finalists? Roger Federer vs. Richard Gasquet and Rafael Nadal vs. Novak Djokovic. They played last night. Too late for me to have watched and written this column. And so I’m guessing the winners…

Richard Gasquet? Who’s he? Good question. These are what I know: He’s French, he owns probably the best single-handed backhand in tennis, and, because beat Roddick and reached the semis, he’s now world no.7. That’s good. Now here’s the bad news: Roger Federer will clobber him. Gasquet (photo below) will slip on the grass, fall on his buttocks, drop to his knees, kneel, until he’ll finally stand up to shake Roger’s hand. 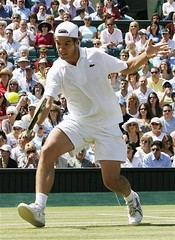 Novak Djokovic? Who’s he? Good question. He’s the most annoying player on the ATP Tour. Have you watched him dribble? And dribble? And dribble? At times, bouncing the ball up to 18 times before he serves? I’ve heard Venus Williams and Maria Sharapova scream and grunt and cause the birds to cover their ears, but Djokovic’s serve is even more bothersome. That’s the bad news. Here’s the good: He’s very good. Only 20, he’s now world no.3. And didn’t he just beat Nadal on a Miami hard-court a few months ago? Yes he did. 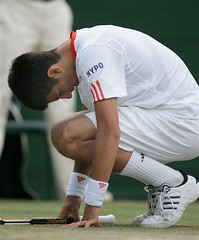 But Rafa will win. His confidence, after winning the French Open a third straight time, is as high as his topspin bounces. And here’s a big plus for Rafa: Djokovic’s previous match lasted five hours. So he’s fatigued. 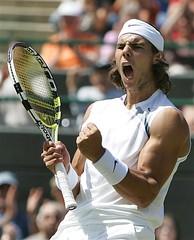 Which brings me to conclude: Once more, it’s Roger versus Rafa. My thoughts?

Roger is to grass what Rafa is to clay. If Rafa won 81 straight matches on clay, Roger has won 53 straight on grass. And since it was Roger who broke Rafa’s clay-court winning streak, will it be Rafa’s time to return the favor?

And didn’t these two, just last May, compete in a half-clay, half-grass exhibition match? Yes they did. I won’t tell you the result but this I’ll say: If you haven’t seen it, watch the video clip.

If you ask Michelle So, Macky Michael, Dr. Ronnie Medalle, Dr. Ron Eullaran and conduct a survey of the 7.5 million people who reside in Switzerland, you’ll get this reply: “It’s Roger for Wimbledon no.5!”

Me? You want to ask me? A Nadal fan? Sure. Like a walkie-talkie operator saying yes, here’s my answer: “Roger on that!” 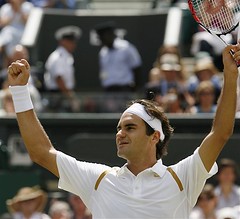 So, there. Watch the men’s finals at 9 tonight over Star Sports.

LADIES? Everybody expected Justine Henin to reach the finals. She’s world no.1. She won the French Open 28 days ago. She’s hungry for her first Wimbledon crown.

But herein lies the intrigue of tennis. As the saying goes, “The ball is round.” And so Marion Bartoli (a name, I must admit, I hadn’t heard of until three days ago) played Venus Williams in last night’s finals. Did she win? Did she have a chance? True, the ball is round but, in the end, that ball transforms into a fourth Wimbledon crown for Venus. 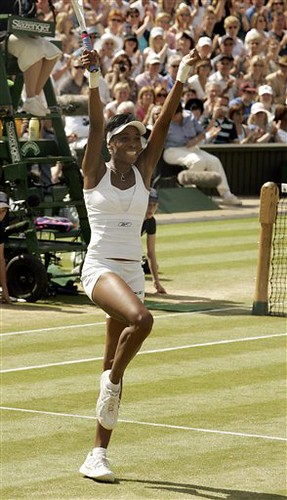 Let me add another W.