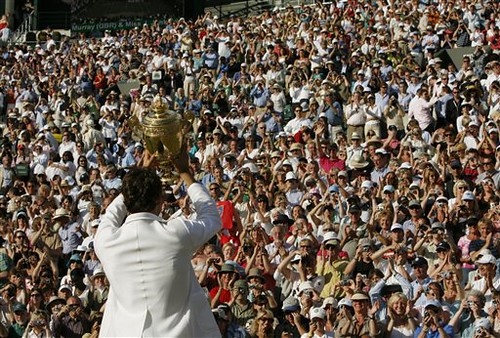 HE’S DONE IT! Down two break points in the second game of the fifth set, he escaped. Down another two break points in the fourth game of the fifth set, he squeezed out aces and escaped. And then, in the next game, during Rafael Nadal’s serve, he broke. A few minutes later, Roger Federer smashed a volley, fell to the grass, then held aloft the Wimbledon crown. His fifth straight title at the All-England Club. His 11th major. But more importantly, he beat a nemesis who conquered him four weeks ago in Paris. And, he showed the world his heart of a champion. As my good friend Jourdan Polotan said it best in his text message at 1:20 this morning: BRAVO!

Check out these articles. Among all that I’ve read about the Final, these are some of the best: Bud Collins with “Federer’s Heart Lifts Him To Title.” Here’s Jon Wertheim on “Nifty Fifty“… his 50 parting points. And, of course, read the full interview transcript of both Roger and Rafa here.