What can you say? When a man is down four break points in the fifth set of the 2007 Wimbledon final, and he unleashes aces and barrages of forehand slingshots? You say he’s a Swiss magician.

When a man is facing immense pressure in trying to win No.5, and he looks up at the front row and there, with flowing white hair, sits the last man to win a High Five… Bjorn Borg? You say he’s as cool as the Swiss Alps.

When a man is fronting the Hercules of Tennis, the left-hander who leads their record, 8-4, the same Raging Bull who trampled on his red Swiss flag four weeks ago in Paris? You say he’s part of the Swiss Army.

You know what I want to say to Roger Federer? BRAVO!

Who’s stopping Roger? Sure, Rafael Nadal came close to winning. But we know that “close” and “champion” are never similar—except with that first letter. And so Rafa came “close” while Roger is, well, “Champion.”

“I like it,” said Roger of their rivalry. “I win my share, he wins his. It’s a good rivalry, I think. We’ve been at the top for over 100 weeks together. It is building up to one of, maybe, the great rivalries.”

Eleven of the last 12 Grand Slam trophies sit inside the homes of R and R.

But among all their major finals, this was the closest. “I didn’t feel I play worse than him from the baseline,” Nadal said. “Maybe if we have to find any difference, maybe the difference is the serve. He serves better than me, and that’s important on every surface, but on this surface more.” 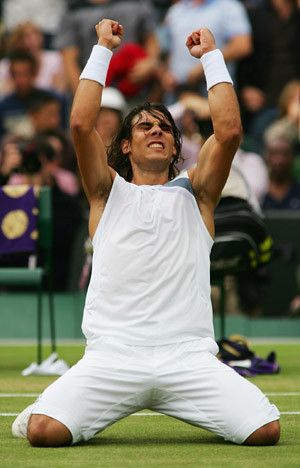 Nadal is right. When both their feet are planted on the baseline, it’s 50-50. But herein lies the difference: Roger had 24 aces, Rafa had one. If you divide Roger’s 24 aces by 4, that’s six “free” games he won. And Roger didn’t just serve aces. His serve bailed him out on many occasions when he was down. Break point? Ace. No problem.

Here’s an interesting thought: In a little over a year’s time, if Federer continues his trophy purchases, he could surpass Sampras’ 14 majors-record in the 2008 U.S. Open. And while Sampras won his last Grand Slam at 31, Federer would only be 27. 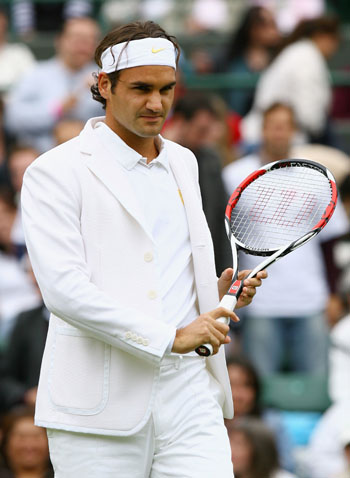 TODAY. You know what I like about Wimbledon? It’s no longer boring. Remember the late ‘80s? The ‘90s? That was boring tennis. Only four words summed Wimbledon then: Serve. Return. Volley. End. That was then. That was the era when, if you studied the Centre Court grass, the service box area near the net would turn bald. It turned brown.

Today? The grass is green. What does this all mean? Only one conclusion: Serve-and-volley tennis is dead! It died when Sampras retired.

But you know what? I like today better. Though I miss the quickness of serve-and-volley, isn’t it more fun to watch eight, 13, 16 rallies off the baseline?

BADGERS. I watched with Macky Michael and doctors Ron Eullaran and Ronnie Medalle at the Badgers Resto Bar in Banilad. We arrived past 9 and while the two doctors had early morning appointments and had to leave by 12, Macky and I stayed until 1:20 a.m. when the cameras flashed on Roger.

I was the lone Nadal fan. But the biggest Roger fan of all? The person who’d be elected president of the RF Fans Club if one were recognized in Cebu?