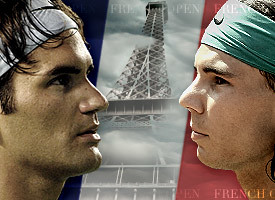 Roger Federer vs. Guillermo Canas? Rafael Nadal vs. Novak Djokovic? This will be an all-star semi-finals cast. If you recall, the last two times they met, Canas beat Federer. So this will be interesting. But the French Open is a Grand Slam event and, in the last three majors he’s played, Federer hasn’t lost. So, against Canas, he won’t lose. He’ll enter the finals. Nadal? Of course he’ll join the world no.1. Wow. Can you imagine another R and R finale? Here’s why this Sunday’s fight will be a classic…

One: if the Swiss wins, it’ll be his first-ever crown at Roland Garros. Which means he’ll have surpassed Pete Sampras, John McEnroe and Jimmy Connors (to name only three) who’ve scrambled, browned their shoes, slipped—and never won a title—on the Paris red clay.

Two: Federer’s win translates to Grand Slam title No. 11—and he’s only three major titles away from the all-time record (14) of Sampras. 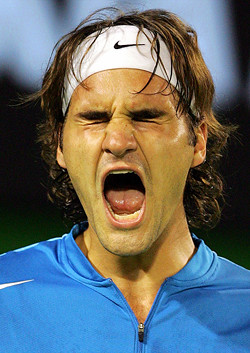 Three: if Roger beats Rafa, it will mean the defeat of a player deemed unbeatable on his surface—the clay court. Remember: Nadal has never lost a match at Roland Garros. He’s 17-0. On his first attempt two years ago, he won. No one in French Open history (except Mats Wilander) has accomplished such a feat.

Four: a Roger win this Sunday will mean he has, again, won without a coach. Isn’t that amazing? And crazy? Unbelievable? Think about it: the world’s no.1 player en route to being “the greatest ever” with $32 million plus in his Swiss bank account—this man doesn’t even have a coach? Well, Federer had one. But three weeks ago, he shocked the tennis world by firing Tony Roche. And now he wins the French Open just after having booted out his coach?

Five: it’ll a Roger Slam. Exactly what his pal Tiger Woods accomplished when Tiger swept the 2000 U.S. Open, British Open, PGA Championship and the 2001 Masters. In Federer’s case, he won Wimbledon and the U.S. Open last year, the Australian Open in January and—his fingers crossed—this French Open. So, it goes without saying, to Roger, this major is major.

The man standing across the net? The man Roger portrays as the nightmare to his dream? Who’s beaten him five out of six on clay? The man whom he watched carry the trophy last year while he watched in envy?

Rafael Nadal. This Spanish Gladiator—who can curl a barbell weighing 66 lbs. on his left hand and has an asteroid (“128036 Rafaelnadal”) named after him—is Roger’s nightmare. Why, you ask, will Rafa win?

One: he’s Spanish. And, if you check the record books, four of the last five (and seven of the last 14) Roland Garros champions are Spanish. 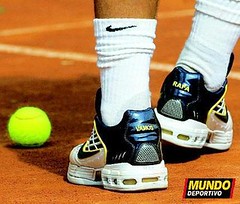 Two: the longer the match, the tougher to beat Nadal. Why? Stare at those muscles. Marvel at his speed. A three-hour-long match? Nadal says good. A four-hour battle? Nadal says better. Five hours? Yes! Nadal shouts. So, this is what it means: in lesser events, where only two-out-of-three sets is played, you wrong-foot Nadal and beat him. But the French Open? Three-out-of-five sets? Five hours?

Three: Nadal’s hungry. He’s always been hungry. That’s his strength. He wants it more. He runs more. Tries harder. He’s willing to fire that extra shot, sprint that extra run, swing one more backhand when his opponent says, “No mas.” And you know what Nadal’s loss to Federer in Hamburg two weeks ago means? He’s extra hungry. He’s seeking to avenge. “How dare you break my 81-match winning streak!” his mind screams.

Four: He’s left-handed. Do you know how big an advantage being a leftie is? With Nadal, this plus-factor is magnified because of the spin his forehand generates. He snaps that wrist, the ball curls, flies, so that when it drops on the red clay it bounces so high the enemy feels like he’s hitting a smash.

So, who’s my bet? He’s 6-foot-1. Endorses Nike. Sports a bandana. Wears a wrist band. And his first name starts with an R.