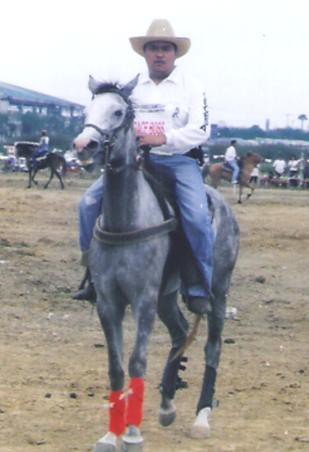 Jacinto Gayanilo Mendez II is a cowboy. No, “Jake” is no grandson of John Wayne nor does he own a ranch at the Alamo in Texas. Like you and a million others, he was born, raised and schooled in Cebu City.So, he’s a cowboy? Yes. Jake owns two horses named Barrack and Maxim. Peer inside his bedroom and you’ll spot four brown hats and pairs of leather boots. He wears gloves, chaps, blue jeans, a thick belt and, yes, the cowboy must-have tool: a revolver.

“We’re urban cowboys,” declared Jake, smiling, when I sat down with him last Tuesday night. His face was all-red; sunburned after the three-day-long feast called the Kabayo Festival. “In Cebu, we’re part a group who owns horses and rides on weekends. We go trail-riding, travel to Bukidnon and join races… So, yes, we’re cowboys, but the only difference is, we live in the city. So, we’re urban cowboys.”

Jake Mendez’s passion for horses began when he was still a pony of a boy. His father, Atty. Jack Mendez (the founder of the family-owned Centurion Security Agency), hails from Bohol and during summer vacations, he’d drag his only son on frequent trips to the Chocolate Hills Island. There, young Jake would spend weeks visiting farms where horses roamed. He gazed at the muscular beings and hopped on the stallions saddle-less.

Jake loved it! He grinned from ear-to-ear. He’d shout to his three sisters. He’d kick the horse at the ribs then scream, “HEE-YAH!” At nine years old, he was a boy cowboy.

Months passed, years followed. Jake longed to bring a horse home to Talamban. He begged his dad. Finally, when he was 18, his father said yes. They found a horse in Ormoc and so, Jake’s lifelong dream of horse-play turned into reality. “Comet” was blonde, colored a unique “Palomino;” his tail and mane were long and thick and flowed from his lean white body. 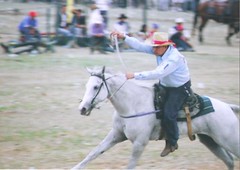 TODAY. “It’s been 15 years,” Jake told me, “when I first got Comet.” Since that year in 1992, Comet has passed away while Jake acquired three new pets: Snoopy, Barrack, and Maxim.

Why horses? I asked. Jake’s eyes lit up. Like asking a seven-year-old why he craves for candies, he grinned. “There’s a special bond between owner and horse. A horse, remember, has a mind of it’s own but if you can understand what’s inside, control it, and command it to follow what you want… then that’s special.

“Nature… the love of nature. That’s another reason. On a horse, while trail-riding, you can explore Cebu and discover areas you’d never visit on foot.”

Three to five times each month, Jake and his buddies ride. “Since I live in Talamban, we ride the northern part of Cebu… Talamban, Liloan, Consolacion, or, at times, as far as Bogo.”

CEOBSA. Today, Jake is the president (and founding member) of the Cebu Equine Owners Breeders Sportsmen Association, which started in 1997. If one loves horses, this is the group to join. Members ride together, join competitions, travel, host events. 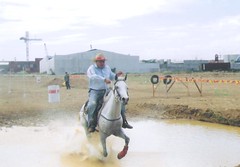 KABAYO FESTIVAL. Two months ago, CEOBSA organized the Kabayo Festival at the Mandaue reclamation. Over 65 competitors and 33 horses joined—with riders from as far as Impasugung and Malaybalay, Bukidnon; Cagayan de Oro, Davao, Dumaguete, and Manila.

Gov. Gwen Garcia took part. So did Mandaue City’s former sports chief, Cheryl Ouano. There stood a “Tabo Sa Rancho” where items from the different municipalities were sold. The Kalesa race had the public clapping. The event’s youngest competitor? An eight-year-old boy. The oldest? A 60-year-old grandpa.

After I interviewed Jake, I nodded in agreement. With the 10-year-old group like CEOBSA, with the huge success of the Kabayo Festival, with Gov. Gwen and Anton Q and Jake Mendez mounting horses, now I can declare: Cowboys don’t only exist in the Wild, Wild West, they also trot and gallop in Cebu.