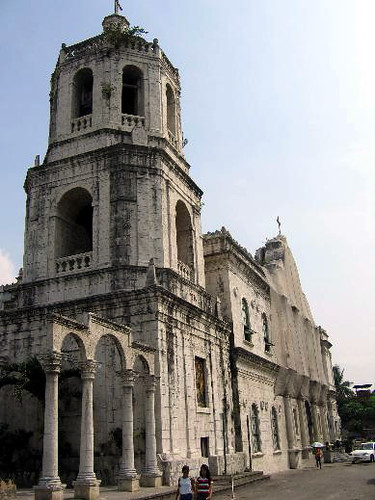 To all visitors to Cebu: Welcome to the Land of Lapu-Lapu, to the host of the 12th Asean Summit, to RP’s oldest city and it’s oldest street named Colon.

Welcome to this narrow Visayan island spanning 225 kms. from Daan-Bantayan to Santander, surrounded by 167  small islands—including the white sand beaches of Mactan, Camotes and Malapascua. Welcome to the place Condenast Travellers Magazine once named “the 7th best Asian-Pacific island destination.” (Although we Cebuanos feel we deserve the top rank!)

Welcome to the kitchen where dried mangoes, chicharon, dimsum steamed rice, puso and danggit are concocted. Where the headquarters of conglomerates family-named Aboitiz and Lhuillier and Gaisano are based; where, as you read this, call centers at the Asiatown I.T. Park are abuzz with queries from Texas to Toronto; where, at noon, you can relax at the five-star Mactan Shangri-La Resort or, at night, watch five thousand and five stars from above the mountains at Tops. Welcome!

Today, where are you watching? Me? Alongside 11 other family members, I’ll be sitting from the grandstand of the Cebu City Sports Center. So should you. It’s my third trip (in four years) up the bleachers and, as a tip to balikbayans, it offers the best view. Along the streets of Osmena Blvd., sure, you can catch a glimpse of the costumes and dances, but they’re nothing like the grandstand. From up there, there’s a humongous stage built by Sinulog executive director Ricky Ballesteros and you can see everything—including the 7 p.m. fireworks show, Sen. Jinggoy Estrada, if you’re a fan; the crowd-favorite Tribu Basakanon… Everything.

AND NOW TO SPORTS……. At the Australian Open, Serena Williams barely escaped the other day. Down a set and 4-5 to the fifth-seed Nadia Petrova, she scrambled for the yellow ball, fired down 202-kph aces, pumped her fist to the Melboure clouds, and scored an “upset.” At times, Serena looked like her former world no.1 self. But you can’t help but see how fat she’s become. Serena’s always been bulkier compared to her sister Venus, but she’s become too bulky. Look at her legs. They’re thicker than Veco posts. Her behind? They’re two balloons glued side-by-side. Still, she possesses two most valuable traits—power and will. The result? A WW: Williams Win.

Today, the match to watch is Roger Federer vs. Novak Djokovic. If you think Roger The Great will work with Swiss precision like the Rolex watch he wears, you’re right. He’ll win. But here’s a point: Djokovic is good. Very good. He’s ranked no. 14. And he’s only 19 years old. I saw portions of his match the other day and he’s complete. Serve, good. Forehand, good. Movement, good. Backhand, excellent. It will be a tough delivery assignment for the Federer Express.

The opponent of Djokovic last Friday? Danai Udomchoke. Familiar name? Must be. Two years ago during the SEA Games in Manila, Udomchoke played for Thailand. I recall Dr. Ronnie Medalle and I sitting a few meters away in awe. In the finals, Udomchoke faced our Fil-Am Cecil Mamiit. What a match! The first set went to Cecil, the second to the Danai; in the last set, the Filipino snatched the win and the gold medal. It was a proud moment when Mamiit danced “Pinoy Ako.”

Fast forward last month in Doha, Mamiit and Udomchoke joined the Asian Games. They both reached the semis. Cecil lost, Danai won. In the finals, Udomchoke won and, with it, the Asian Games gold medal hung on his neck.

Earlier this week, Danai continued the streak by beating former French Open champion Juan Carlos Ferrero. Known for a country with only one superstar (Paradorn Srichaphan), Thailand has found a new king.

THE NFL. You may or may not be a fan of American football, but this game you can’t miss. Tomorrow morning (7:30, RP time) will be the most awaited game of the calendar: the New England Patriots vs. the Indianapolis Colts. What’s exciting about this game?

These two are the quarterbacks. They call the plays, tell which runner runs where, they hold the ball, find an open man and throw, throw, throw.

Tom Brady is the QB of the Patriots. In the playoffs, he’s amassed an unequaled record: 12 wins, 1 loss. He’s led New England to three Super Bowl titles in six years. And by the way, a tip to Maria Sharapova, Brady’s still single.

Peyton Manning is his arch-rival. He has as many records as Brady, the notable one, “the most no. of touchdown passes in a season (49 in 2004).” But his negative mark? During playoffs, he wilts. His scorecard: 5 wins, 6 losses. Who’ll win the QB match-up? Who team will to the Super Bowl on February 4 in Miami? Find the answer tomorrow. The game starts 7:30 a.m. (RP time) over ESPN. Replay is at 6 tomorrow night. My pick? At game’s end, I hope Brady dances the Sinulog.