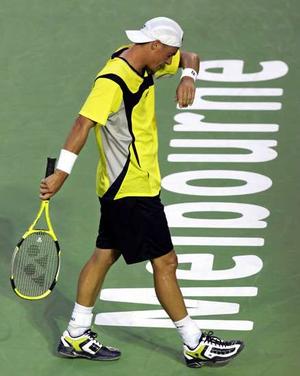 In tennis, like in golf, there are four grand slams. “The Majors,” they’re called. There’s the French Open, or “Roland Garros,” held every May in the world’s most romantic city. There’s Wimbledon, the tour’s undisputed “most prestigious,” every June in the land of royalty. There’s the US Open in loud New York, the last slam bang of the year, every September.

Today, we have the Australian Open.

Wimbledon? The French Open? Why, they’re in Europe. The US Open? Of course, it’s in America. Not to be outdone, we’ve got our own: the Australian Open, dubbed “The Grand Slam of Asia/Pacific.”

It all began as the Australasian Championships in 1905. That’s a long time ago. To be exact, 102 years back. By 1927, the name had changed to the Australian Championships and finally, in 1969, when amateurs and professionals competed side-by-side, it’s been the Australian Open. The venue, since 1905, has kangaroo-hopped on five different cities—Melbourne (where it is today), Sydney, Adelaide, Brisbane, Perth—and was even held in New Zealand in 1906 and 1912.

Today, it’s on Melbourne Park. It owns the rare accolade as the only grand slam venue to house two courts—the Rod Laver and Vodafone arenas—with movable rooftops that close during rain or extreme heat. (By 2009, though, expect Wimbledon to have its own retractable roof on Centre Court.) 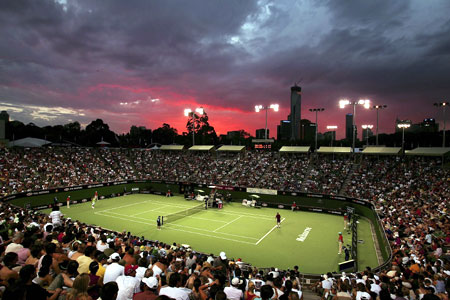 Australia, as a country, is a mighty blue shark in the ocean called sports. Swimming. Cricket. Soccer. Rugby. Track and Field. At the Olympics. At world meets. Without fail, there’s a good chance atop the winners’ “A” list is Australia.

You see, through the decades, Australians have developed some of the best-ever tennis stars: Ken Rosewall, Roy Emerson, John Newcombe, Fred Stolle, Margaret Court; and, the past decade, Pat Rafter, The Woodies doubles team, Pat Cash and the in-your-face, “C’MON!!!” warrior whom everyone loves to hate, Lleyton Hewitt.

The most famous “mate” of them all?

Rod Laver. He is the only player (male or female) in history to have won the calendar grand slam twice, in 1962 and 1969. No wonder the Australian Open center court is named after him. And, if you recall 12 months ago, no wonder Roger Federer cried when he received the champion’s trophy from Laver’s hands. He was honored by the presence of The Rocket.

SURFACE.     The Australian Open surface? Hard-courts. Wimbledon is on green grass (the fastest surface because the ball skids), the French Open is on brown clay (the slowest surface), while the Oz Open’s hard-courts are considered the “most fair” of all surfaces. Unlike clay, where Spaniards Rafael Nadal and Juan Carlos Ferrero dominate because of their heavy-topspin style or, on grass, where Pete Sampras and Boris Becker excelled because of their 140-mph serves, the Open’s hard-courts are neutral. Not too fast. Not too slow.

To us here in Cebu, the live cable TV coverage over Star Sports. From 8 a.m. until mid-afternoon, then from 4:30 to 8 p.m., we see the action as it unwinds in Melbourne.

As the cliche goes: “Only the Strong Survive!” Why? First, the heat. At times, temperatures reach 45 degrees and years back, players fainted. (At least they now have the roof.) Also, the Open is scheduled in early January. This means that to win, you’ve got to forgo of the Christmas holidays. Remember Andre Agassi? He won this event four times. Why so many? Because on Dec. 25, while others ate cheesecake and drank Dom Perignon, he climbed the stairs of sports stadiums. AA won.

ROGER. This ’07, RF will win. Who else can you choose? If you study the history of Open winners, you’ll see a pattern: The winner is the all-around player. RF? He’s the most complete player. Ever. Sampras was close. But Pete owned a weak backhand and never possessed the patience of a baseliner. Unlike the Swiss. 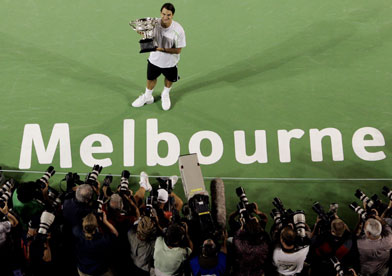 The women’s side? I like Maria. Who’s Maria? Of course you know Maria. She won the last grand slam event, wears a diamond-studded watch with the same brand as Tiger Woods, was rumored to have dated Andy Roddick, is the highest-paid female athlete in the world earning $20 million a season, stands 6-foot-2, owns green eyes, and, best of all, she’s solo.