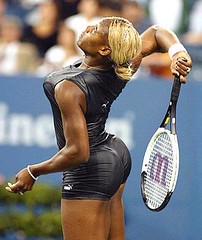 Hours after her Australian Open win, Serena Williams was asked: Are you in better shape than people give you credit for?

“I definitely think so,” she said. “Just because I have large bosoms, and I have a big ass (laughter), I swear, my waist is 30 inches –  29 to 30 inches, it’s really small! I have the smallest waist, but just because I have those two assets, it looks like I’m not fit. Just in the locker room staring at my body, I’m like, “Am I not fit, really not fit? Or is it just that I have all these extra assets?” You know, it just looks like I’m not fit. I don’t care if I didn’t eat for two years, I still wouldn’t be a size 2. No matter how slim I am, I always have this and that. I’m just not that way, I’m. . . bootylicious, so to say.”

Serena, no doubt, was fit. How can you claim being unfit if you win three-hour-long matches that score 8-6 in the third set? There’s also no question that Serena’s back. And so will, very soon, Venus Williams. During the years 2000-2003, when the sisters reigned over Tennisdom as the world’s top two, few doubted they’d be toppled. But after a combined 12 Grand Slam singles titles, the Williamses got bored. They published a book, appeared in The Simpsons, and designed a clothing line named Aneres (spell it backwards). They did everything else off-court to distract them on-court.

But now, Serena’s back. Good for tennis, bad for Maria.

Roger Federer has a split personality. Don’t you find him mean? Watch him play. He smiles, shakes your hand, and appears to be a nice guy then all of a sudden he runs you left and right, drills a forehand you can’t smell, makes you look like a beginner (Roddick?), and then he shakes your hand again because… you’ve lost, he’s won. What has Federer proven?

He’s proven that he’s unstoppable. Like a bullet train with a mission to tour the world and collect trophies at each station, that’s it, The Federer Express. The question today is not whether he’ll break the all-time Grand Slam singles titles record of Pete Sampras (at 14), the question is if he’ll break Steffi Graf’s all-time-mankind-record of 22 majors. At only 25 years old, why not?

The French Open. The only Grand Slam title he hasn’t won. Will he? Of course he will! And it may come as early as this May. Unlike Sampras (who never won Roland Garros), Federer is a baseliner willing to exchange 27 shots with a Spaniard like Tommy Robredo. He’s patient. And isn’t patience the prerequisite to a dance in Paris?

Here’s the scary part: Federer’s getting “betterer.” He is. He’s improving. Isn’t that scary? Just when everyone “oooh’s” and “ahhh’s” and says he’s “the best ever,” he wins. And wins. And wins the Oz Open without dropping a set.

How do you beat him? How do you wound a warrior who looks like Russell Crowe in The Gladiator? I found the answer from Rod Laver, who said, “The best way to beat him would be to hit him over the head with a racket.” (Laver, of course, was joking.)

Here’s another scary thought: The Fed has so many weapons. He can slice. He can serve-and-volley. He can drill that forehand down-the-line. He can flick that backhand cross-court. He can play defense. Offense. Ace. Lob. Drop shot. And the best part: he plays so relaxed. And this is why I think Federer will last a long, long time. He’s relaxed. And so, when we talk of injuries, he’s less prone. Compare his game with Rafael Nadal. The Spaniard uses an extreme grip where he swivels his arm and snaps the wrist to smother the ball. Nadal grinds it out. He’s physical. Federer? He’s Mikhail Baryshnikov. He’s a ballet dancer. He floats. Glides.

Was it any coincidence that a few hours after Roger won, Tiger Woods captured the Buick Open? Nah. I don’t think so. You see, these two buddies call each other often to say, “Hey! I just won. Your turn!” The other replies, “Sure!”

Both, as you’ve read, are on winning streaks. Tiger won his seventh straight PGA event, Roger his third straight Grand Slam title. At this frenetic pace, it won’t be long before “Roger” is placed alongside the names MJ, Ali, Tiger, Pele, and Lance.

Split-personality. Why did I say that? Because as “bad” as Federer is on-court, he’s such a nice guy off it. Did you see the finals against Fernando Gonzalez? You saw what Roger did after the match? This I’ve never seen before: After he fell to the ground, raised his racket and arms to the Melbourne sky, and put on his Rolex, you know what he did? He visited the wounded. He went to Gonzalez, who was seated, bent down beside him to talk. He consoled him. He laughed with him. He told him, “You played a great match…”

What a nice guy. Here’s more: During Roger’s acceptance speech, he nodded to his girlfriend and his coach, but never mentioned their names. But when he spoke of Gonzalez’s coaching staff, he lavished them with praise.

Why do opponents not mind losing to him? There’s your answer.