Laguna Governor Jeorge “E.R.” Ejercito Estregan should be applauded for the staging of the 57th Palarong Pambansa. It was Laguna’s first-ever hosting of the country’s biggest sporting party and, based on what my eyes witnessed from May 4 to 10, the event was a mammoth success. But here’s the catch: It was a self-promotion. Let me explain.

First, there’s the “Magic Bag.” Each of the thousands of athletes received from the host province a bag. Great! But guess whose name and photos were prominently advertised outside and inside all the contents of the backpack?

Gov. E.R. Estregan. On the bag’s outside was his photo. Inside, there’s a ballpen bearing his face. Same with the fan (paypay). The coffee mug? His picture adorns it. There’s a sleeping mat/foam — very nice. Only that when you sleep on it, you will (literally) be cheek-to-cheek with the governor as his photo is on both sides of the mat, at the exact spot where your head rests.

All throughout the Palaro host cities/towns of Los Baños, Sta. Cruz and Pagsanjan stood innumerable billboards that promote the Games. This is good. But what’s bad are the giant images are all decorated with the governor’s face — as if personal money was spent.

In the sports complex, the moment you enter, his name is plastered on the entrance. Standing on the track oval, when you gaze throughout the arena, at the top of each of the bleachers and the grandstand is his name proclaimed.

Gov. E.R. — a nephew of Manila Mayor Erap — attended several awarding ceremonies. I watched a few. While he’d shake the winners’ hands and pose with the medalists, right beside him would stand a mascot with a giant-size head. Whose large head did the mascot reveal? Of course, who else but the head of the province. In the Closing Ceremony last Saturday, while the real life Gov. E.R. congratulated the champions, his two Gov. E.R. clones/mascots were walking about, shaking hands! 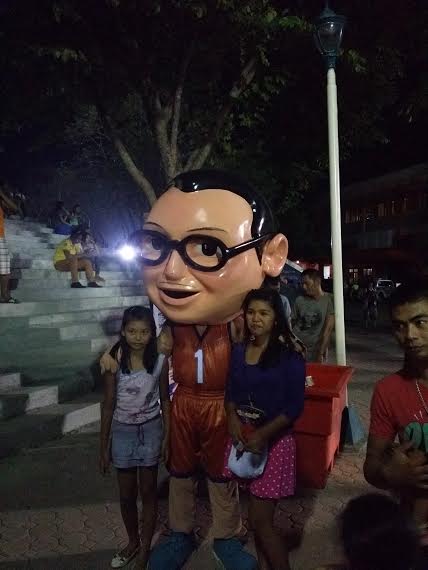 In business, this is called marketing. Promotion. Publicity. This is good politics. The tens of thousands of Laguna residents and the thousands more from all over the nation will know the star — the movie star turned politician. But using sports for political gain? This is showbiz.

The funniest of all? The boy mascot. The logo itself of the Palaro has this boy pictured everywhere. Need you ask who the mini version is? He’s a bespectacled kid with black-rimmed glasses — the 12-year-old version of E.R. complete with a mustache! Yes. I rarely see a boy with mustache. But this boy sports one. Even our car pass with the CVIRAA name has the logo with Little Boy E.R. The orange plastic chairs at all the sports venues, including those found at the Unson National High School — on each chair were engraved two initials: E.R.

All the Palaro sponsors are required to place the logo and the mascot/boy’s face. Greenwich Pizza had a “Visit our Booth” banner with the governor’s photo.

Speaking of pictures, a great idea of the organizers was the Photo Booth. Log-in your Facebook account and you get to pose with your friends and you receive a printed photo for free. The catch? Gov’s smiling face, complete with him pointing the “No.1” sign, stand behind you in the photo. Some athletes told me they received a free gift — a DVD with E.R.’s movies! Incredible.

I recall then-governor Gwen Garcia promoting herself through sports via the GUV Cup (volleyball), Horse Barrel races and Airsoft games. I remember the Mandaue reclamation lined with banners of Gwen. That was nothing. This screams 50 times more advertising.

Isn’t there a law prohibiting the excessive use of an official’s pictures and name to promote a government-organized activity?

In the weeklong Palaro, I know that hundreds of elementary and high school girls and boys were awarded medals. But, in the game of self-promotion, there is only one gold medalist. The kid with the mustache.