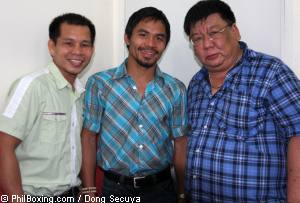 I tried calling Gerry Peñalosa yesterday. The ringing tone sounded different, like the call was international. Hours later, I found out why.

I wanted to unlock the thoughts of one of Pinoy boxing’s greatest fighters, the man termed by Freddie Roach as “the country’s best ever technical boxer.”

We didn’t talk. Maybe for another column.

I next tried Rex Salud. You know Wakee. He’s Manny Pacquiao’s best friend. They’ve been together since 2005 when, after Manny’s loss to Erik Morales, the Cebuano invited the boxer to Lapu-Lapu City for wild nights of cock-fighting, Casino gambling, drinking, and a myriad of other extra-curriculars.

Each day, he gets to see Manny. “When I arrived, Manny had bouts of colds, coughing and he had a slight fever,” Wakee said. “This week, good that he’s able to recover.”

He explained the brutal practice sessions of Manny, each one lasting up to four hours. “Maayo (Good),” Wakee said, describing the training sessions. “Doble ang (Double the) power compared to the Rios fight.”

Wakee has not missed a live Pacman fight since 2005. That’s nine years ago. Since then, Manny won 15 straight bouts up until June 2012 when he lost to Timothy Bradley. Manny lost again to Juan Manuel Marquez.

15 consecutive wins. Two subsequent losses. A win last November. Every one of those 18 bouts, Wakee Salud was present at Manny’s corner. Including the one to come next Sunday.

Of that Rios fight four months ago in Macau, I spotted Wakee on multiple occasions accompanying Manny and his entourage. An hour before Manny stepped inside the ring, Wakee passed our seating area. We chatted. Forever the optimist, he was confident of MP. Next weekend is no different. By “all-out,” Wakee means that the Sarangani Congressman is taking zero chances against an opponent who defeated him the last time. “Timothy Bradley has improved a lot,” said Wakee. “He defeated Ruslan Provodnikov and Juan Manuel Marquez. He’s even better now.”

Bradley sports a spotless record. If he wins next week, that’s 32 straight W’s. “Manny cannot underestimate Bradley,” added Wakee. These are humbling words from the operator of the RWS (Rex Wakee Salud) gym in Labangon — the spot where Manny trained in 2007 for his bout against Marco Antonio Barrera.

I say “humbling” because when I first asked Wakee the same question two years ago prior to Pacquiao-Bradley Part I, he told me: “No chance for Bradley. Easy fight for Manny.”

That was in 2012. Now, it’s different. It’s all-serious. All out. The aim, obviously, is to put to sleep Bradley. “For sure, Manny will go for the knockout,” he said. “That’s the goal. But even if he doesn’t, he will win by decision.”

The question I failed to ask Mr. Salud is this: Granted that Manny wins, that’s well and good. Smiles will be plastered on the faces of the 100 million Filipinos worldwide. A victory parade beside Erap will encircle the streets of Manila.

What if ang atong manok ma-pildi? Manny’s on a decline, no doubt. He’s lost two of his last three with the lone win coming against a weak Rios.

Let’s see. Let’s not jump to negative possibilities. I guess the answer would be: It depends on how he loses, if ever. If it’s via knockout — which is so unlikely, given Bradley’s record of only 12 KOs in 31 fights — then it’s surely game over for MP.

But we expect a win. We hope for it. We pray to God that His renewed son will be triumphant. For now, it’s just counting down the days. Day 10, 9, 8…