A year ago this week, the world was shocked when terrorists detonated twin blasts near the finish line of the most prestigious road-running race on this planet.

“This year’s Boston Marathon is very special as it is the 1st year anniversary of the bombings,” said Amale Mendezona Jopson, who will be among the 36,000 marathoners when the race begins this Monday, April 21.

Amale is a super-achiever. In high school, she was the valedictorian at STC and the classmate of my wife Jasmin, who said, “In everything she does, Amale excels.” In college at the Ateneo, she met Noy Jopson, the super-triathlete. Today, this husband-and-wife duo is possibly the country’s most athletic couple. The Boston Marathon is the race for super-fast runners. “It is the end all and be all of marathons, for both elites and age-groupers,” Amale explains. “For one, it is the oldest running annual marathon in the world (since 1897). It brings with it many firsts like the wheelchair division, and the first marathon outside of the Olympics with a woman participant- Roberta Gibb, 1966.”

The qualifying times of the race are the benchmark for runners. “The Boston Athletic Association has had to make the qualifying times more stringent, with more runners qualifying but not able to register because of the demand (the standards were made 5 minutes more stringent in 2012),” Amale said. “The brutal rolling course also makes it thrilling for runners with ‘heartbreak hill’ towards the end of the run. Aside from this, Boston practically shuts down for the event on Patriot’s Day, drawing an estimated 500,000 spectators, with only the Superbowl getting more attention.”

For Amale, who turned 40 last December, her qualifying time was three hours, 45 minutes. She joined the Dong-A Seoul Intl. Marathon last year and narrated: “With one final push as I entered the stadium, I felt like an Olympic athlete finishing the race in 3:42:35 – a good 2 minutes clear of the Boston qualifying time! Crossing the finish line, I was overwhelmed by a rush of emotions and gushing tears. I had reached my goal and I was going to Boston!”

Today, she leaves Cebu with her family for New York, arriving in Boston, the city that houses the Celtics and Red Sox, by Friday.

On her preparation, Amale — the Director of Human Resources at Chong Hua Hospital — cannot be happier. She did a PR in the 21K of the SM2SM race and, she added, had “personal bests across all distances from the mile, speed sessions, tempos (5k, 8k, and 10k) and even strong tempo paced efforts in difficult marathon conditions (Philippine PR of 3:50 at Kawasan, 2nd place and strong finish of 3:56 at SRP midnight marathon, 3rd place).” She’s had no injuries, crediting her weekly strength sessions at Epic Performance.

“All predictors point to a personal best at Boston,” Amale said, “I’m aiming precisely just for that – anything below 3:40 will be make me very happy.” 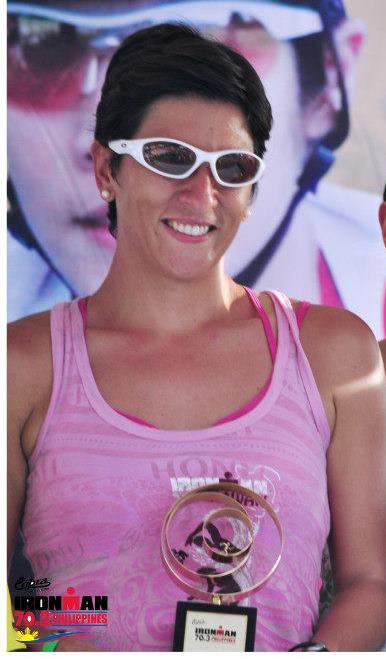 This is Amale’s seventh 42K race. She did the 2011 and 2012 California Intl. Marathons; last year, the Cebu and Seoul marathons; this year, the SRP Midnight and Kawasan Falls races.

On Monday, it’s the 118th edition.     “Boston stands for strength and unity in the running community,” she said. “For me, it is symbolic of the triumph of the human spirit, not only for the Boston Strong cause, but personally, I am running this for the Philippines after Yolanda. I am also dedicating this to my maternal grandfather – my Abu, as this is his 2nd birthday anniversary since passing away. My Abu was also an athlete, and he was always encouraging me through my athletic pursuits. I know he will be watching.”