On tennis, when we reflect back on 11+ months of slice forehands and topspin backhands, two words enter my mind: “Rafa’s comeback.”

I’ll make a confession: Whenever I’m asked which player I cheer for more — Nadal or Roger Federer — I don’t provide an answer. I’m noncomittal. That’s because both are the most smiling, respectable and sportsmanlike of athletes on this planet. But, deep inside (Jasmin and Jana know this), the answer tips in the Spaniard’s favor. Maybe it’s Rafa’s tenacity. Maybe it’s his less-talent-than-Roger-but-bigger-heart that draws us cheering. Maybe it’s his humility. I think it’s all of the above.

This 2013, Nadal has amassed a record that is one of history’s best seasons ever. He won 75 and lost seven. That’s a 91.4 percent winning clip. He won the French Open for an eighth time (he’s lost only once ever in Roland Garros). He defeated Novak Djokovic at the US Open to collect his 13th Grand Slam singles trophy. This “13th in 2013” feat is significant because it puts him in the No. 3 spot among the all-time greats. Pete Sampras has 14 majors and Federer has 17.

Only four Grand Slam titles separate Roger and Rafa. These are interesting questions: Can Roger increase his 17 majors? If he doesn’t, Rafa can easily overtake the Swiss, right? (Their age gap is five years). What if Rafa’s injuries resurface? How long can he last this grinding-type game? Given his dominance on clay, how many more French Open titles will he collect?

We don’t know the answers. That’s the thrill of sports. There are no guarantees. (Look at the America’s Cup last Sept: New Zealand needed just one win but lost eight straight to the Americans.)

We don’t know what 2014 will hold. But this we know this December: Nadal is Numero Uno. Wasn’t this a farflung possibility 12 months ago? Looking back at 2012, right after Wimbledon, he skipped the Olympics (where he was the defending champion), he skipped the US Open, and, when we all thought he was ready, he skipped the 2013 Australian Open.

Apart from the two Grand Slam trophies that he pocketed, the 27-year-old, 6-foot-1 native of Manacor, Spain, won five Masters 1000 titles. These are, next to the majors, tennis’ biggest tournaments. But all these pale in contrast to Nadal’s mightiest accomplishment: He’s healthy. He no longer wears that knee brace. He’s not limping. It’s like an ill man on bed for months who finally walks. Just the mere walking is a blessing. It’s the same for Rafa: just being able to compete on that rectangle court is, for him, a mighty blessing. 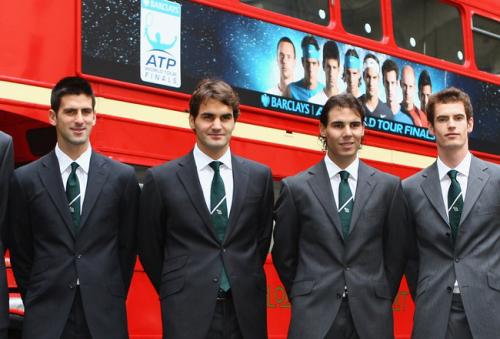 Next year will be a guaranteed smash for men’s tennis. Djokovic just hired Boris Becker. We know, of course, that Andy Murray has Ivan Lendl as his coach. I also just learned from our Cebu-based Swedish coach, Tommy Frederiksen, that his fellow Swede, Stefan Edberg, spent time with Federer. Will Edberg be Federer’s coach? If yes, this is remarkable: Becker, Edberg and Lendl — the Big Three of the ‘80s — are all coaches. (Maybe, as teaser during tournaments, they can play exhibition matches?)

The Australian Open is starting this Jan. 13. The winner of the last three in Melbourne, Djokovic will be a shoo-in to triumph again. Remember that, in the last few months this season, he was unbeatable. (Too bad he missed on that Davis Cup win.) I’m sure “Djoker” or “Nole,” as he’s called, will be difficult to beat.

Murray? He, too, will scramble for that top ranking. Now that he’s unloaded that “monkey off his back” (Wimbledon — winning it last July), he’s raring to not only be one of the Fab Four but to stand at the summit of this Rafa-Nole-Andy-Roger rivalry.

My picks in 2014? I’ll play Santa and gift each of the Fab Four one apiece: The Serb will win in Australia; the Spaniard in France; the Swiss in the U.K. and the Scot in the U.S.