Last Friday, I sat down for lunch with Greg Slaughter and asked him a plateful of questions. Here is the rest of my Q & A with the Cebu basketball phenomenon who stands nearly 7-foot-tall (…now I know why his jersey is No.7). 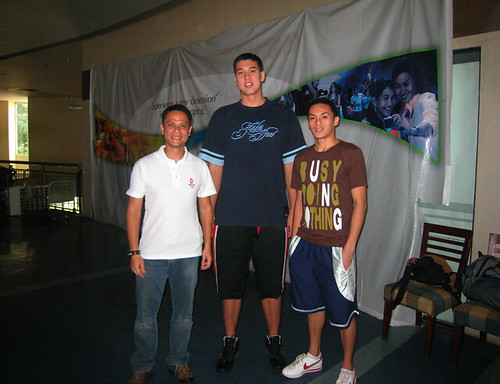 How does Cebu compare to your home in Virginia, U.S.A.? “I really like the people in Cebu. They’re more friendly. People here, especially families, help each other out. So I really like it here. In Virginia, we lived there for 10 years and I didn’t even know the people around my neighborhood. In the States, it’s more individualistic. Here, generally, people are more friendly.”

Are you American or Filipino? (Laughs.) “I’m both. I carry two passports. And, when I’m lining for immigration, I show both passports. So I’m both. I’m Fil-Am.”

Best friend in Cebu? (He points to the man seated beside him, Von Lanete, the star UV guard who’ll be joining the Harbour Centre PBL team.) “We get along very well. Ever since our first practice last year with UV, Von and I have become really good friends.”

How popular have you become? “Well, because of my height, everywhere I go people stare at me. But now, especially with the Cesafi All-Star and the Finals, people recognize me more. A few days ago, we were at the beach and someone approaches to congratulate me for playing well. Here in the (Ayala) mall, people come up to me to shake hands.”

Girlfriend(s)? (Laughs out loud then points to Von.) “He’s got plenty. No comment on my part.” (Then Von points to Greg and speaks.) “He’s got a girlfriend… on and off.”

Your goal? “The PBA. Maybe also the RP team, if I’m called. But it’s got to be the PBA. Which team? The team that pays the highest! (Laughs.) But, seriously, I want to go pro.”

When? “I don’t know. Maybe next year. Maybe two years from now. It all depends if there are offers. I also want to take the next one or two years to continue improving myself. I want to be ready before I join the big league.”

What do you need to improve? “Everything! My left hook, my right hook… my footwork… my running… my perimeter shooting… everything. I’m also doing a lot to strengthen my legs. I’m doing a lot of gym work, especially squatting and, without any gym weights, doing the ‘invisible chair’ where I bend my knees to harden the leg muscles.”

Know how to speak Cebuano? “Gamay. (Laughs.) It’s easier to understand than it is to speak. So I understand the basic Cebuano words.”

Like? “It’s funny because the very first word I learned—and I still remember this until now—is ‘manananggal.’ It’s funny but I just remember that word. Maybe I saw it first on some TV show.”

How does this season compare to last year? “Big difference. When I arrived last year, I got sick a lot. Maybe it was where I stayed… at our quarters. But since I moved to my uncle Fernando’s house (the younger brother of her mom, Emma) in Mambaling, I’ve really improved, health-wise. I’m also able to eat more. Also, last year, I had a hard time adjusting, especially when we practiced or played at the (Cebu) Coliseum. I got pneumonia, had colds… people would smoke inside the Coliseum or they’d roast peanuts… I’m allergic to the smoke from roasted peanuts. But now, I’m healthier.”

Your body weight? Shoe size? “I’m 240 lbs. When I arrived last year, I was around 235—so I gained some weight, possibly added muscle. Shoe size? I’m a size 15… but my feet are starting to hurt and I’ll have to get size 16. It’s difficult buying that size here. I often ask my parents (who’ll be coming here for Christmas) to bring me some.”

What’s next? “Well, the next major event is the Champions League, which pits all the top college teams. Last year, we reached the finals and lost to Ateneo. This year, the event is in November… so that will be exciting. It was difficult last year because, coming from out-of-town, you’d have to wait several days in-between games. It’s a big advantage to the Manila teams because they live there. For us, from Cebu, it’s difficult. But it will be exciting to play Ateneo, La Salle, San Beda….”

Well, I wish those Manila teams good-luck. For as they face UV, they’ll be welcomed into Greg’s Slaughterhouse!