Back in October of 2008, I interviewed Greg Slaughter… here’s the full article… 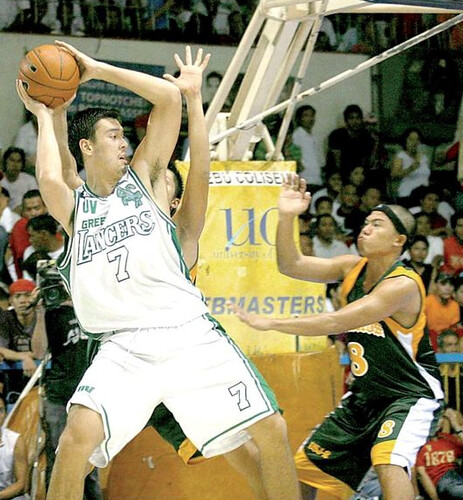 OCTOBER 2008 — Less than 48 hours after leading the University of the Visayas (UV) to its eighth Cesafi basketball title, I sat down with not only the tallest person at the Ayala Center Cebu last Friday—but also the only player in Cesafi’s eight-year history to be named the season MVP, the All-Star game MVP and the Finals MVP.

Together with UV shooting guard (and his best friend) Von Lanete, who’s headed for the PBL on Tuesday to play with Harbour Centre, Greg Slaughter and I exchanged stories during lunch at Bigby’s Restaurant. Von and Greg had just finished lifting weights at the Fitness First—and were famished. And so, just between the three of us, we ordered two large plates of sandwiches, two bowls of pasta, a plateful of quesadillas and their Rack-a-bye Ribs. For nearly two hours, I queried Cebu’s 20-year-old superstar… 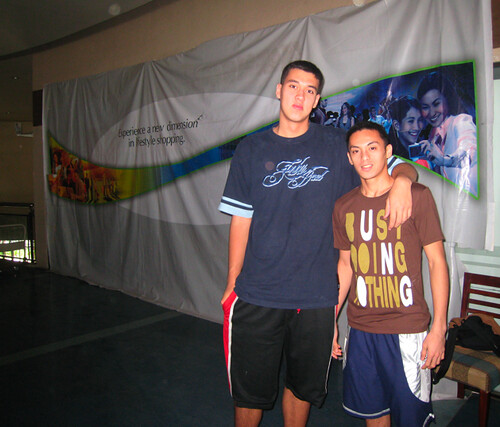 How was your childhood? “My dad, William, met my mom, Emma (Fuentes), when he visited Cebu many years back. They got married and I was born in Ohio. My dad worked for nuclear power plants and so, when I was very young, we moved around a lot. When I was 7 years old, we relocated to Virginia… that’s where I studied and where my parents still live until today.”

How big a baby were you? “I was 11-plus pounds at birth! My mom would later tell me that I was the second-biggest baby ever born in that hospital.”

At what age did you reach 6 feet tall? “When I was 12. I was, obviously, always the tallest in school. And when I finally started playing serious basketball at the age of 15, I was 6-foot-6.”

When you fully stretch your arms, how near the basketball ring are you? “Maybe 8 inches away from the ring. I can tap the backboard and grip the middle of the net. So it’s just a few inches of jumping then I’m on the ring.”

Apart from basketball, what other sports did you play as a child? “Fencing. My dad was into fencing when I was young and I took up the sport. I had this big advantage because of my height and, especially, my reach. I’d fully stretch my arm and it would be difficult for opponents to hit me. That was fun.”

I watched you play Cesafi last year and found you moving awkwardly. How did you improve so much in 12 months? “I practiced everyday. We’d scrimmage a lot, joined leagues. Our coaches Boy (Cabahug) and Al (Solis) practiced us hard, Monday to Saturday from 3 to 7 or 8 p.m.”

Your free throws are excellent. In the Cesafi Finals Game 2, I saw you make 8 of 9. What, unlike Shaq, is your secret? “Coach Boy (Cabahug) asks all the players to shoot 50 free-throws everyday before we start practice. Not 50 attempts—but 50 free-throws in. That goes for all UV players. That helped. Also, because of my height and because I’ll get a lot of fouls and will also be shooting free throws, I always hear this comment, ‘Gotta make those free throws, they’re important to the game.’ So I remember that line.”

Favorite NBA player? “Tim Duncan! He’s so good… so good. He’s not flashy and gets the job done. He’s also a two-time MVP. The thing with Duncan is he doesn’t look dominant—but he is dominant! And so I watch a lot of his games and try to follow him. One time, I followed his signature move… attempting to score a hook shot, faking, turning, then driving in for a lay-up… I tried the same move and it worked. I love that move.”

Hobbies? “I love playing videogames, the PSP (Sony Playstation). I just finished the game, ‘God of War.’ I also play card games around my neighborhood. We play tong-its!”