Anton Villacin takes the pilgrimage every September. For the past six years, he has never missed watching the Formula One race in The Lion City.

“The plan was just to watch the inaugural race (in 2008),” Anton said, via email, two nights ago. “It being a street night race, we figured it will be more fun than a dedicated race track. It turned out we were right, and we got hooked ever since.”

The “we” of Anton includes his barkada from the Bimmercebu Club — the BMW owners’ group. “We took it one year at a time but never planned it to be 6 of 6,” he said. “The usual suspects in our group, Jude Flores (6 of 6), Charles Osmeña (5 of 6) and Choming Marques (5 of 6), are strong convincing movers of our annual trip.” 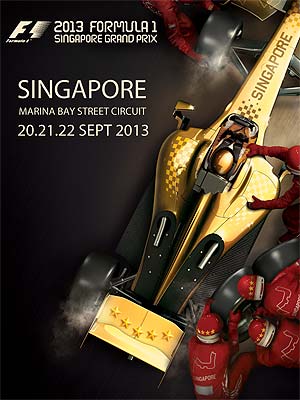 Formula 1 racing is one of the world’s most popular of sports. Composed of 22 drivers representing 11 teams, they hop from one country to another and race their cars up to 350 kph. “For us, it’s the thrill and skill that speed brings; no other circuit motorsport is faster,” Anton said. “Second are the stories that evolve from the sport. And lastly it’s the discipline required of each driver and team. As they say, it’s the pinnacle of motorsport racing.”

The Singapore race last weekend was the 13th of 19 races. What started last March 17 in Melbourne, Australia will conclude at the Brazilian Grand Prix on Nov. 24.

Like in any sport, watching “live”is incomparable. “As an F1 fan, or a motorsport fan in general, I suggest you experience F1 live at least once,” Anton said. “Sure, watching it on TV keeps you updated on the goings-on of the race but nothing beats the sound of those v8s, the smell of gasoline around the track, and the energy you get from thousands of screaming fans. Not to mention the trackside spectacles like the sponsors booths, F1 merchandise, concerts and other entertainment. You can’t get all that while sitting in your living room!”

(Ticket prices? From SG$228 for a walkabout ticket to SG$1,288 for a pit grandstand. “This year we got the bay grandstand for $298,” said Anton. In the group, the luckiest were Charles Osmena and Drew Sarmiento, who won a pit tour on Thursday night; both got to see the pits, crews and cars up-close.)

What’s fun about F1 is that it’s an entire weekend of partying. Anton & Co. watched The Killers on Saturday and Rihanna on Sunday after the race. When you visit the website, you’ll be bombarded with dozens of talents, including Tom Jones, Bob Geldof and Justin Bieber.

The 61-lap Singapore race was won by Sebastian Vettel. An Alonso/Ferrari fan, Anton commented on the world champ: “Although we have all respect for Seb and we consider him one of the elite drivers, we’re definitely not fans. In the F1, just like in most motorsports, the team, especially the engineers, is the major reason for winning. Not to take away anything from Seb but he’s very lucky to have a very good team which gives him a very good car. Seb’s clear focus on winning in most of his comments and actions definitely don’t help his popularity, and the ‘Multi 21’ saga in Malaysia just made it worse. We’re not in any position to decide who’s the greatest but Seb will definitely be in a lot of fan debates and conversations for years to come.”

Finally, convincing us to join him next year for his 7-of-7 quest, Anton concluded: “F1 fan or not, it’s one of those events that we recommend others to experience. For the F1 fan it’s one of the nearest for us; it’s one of the few night races and street circuits. Singapore is such a great city to visit. And even if all you do is stay inside the circuit for three days, you’ll be more than entertained with not only the race but all the circuit events around the race, especially the concerts. And while in Singapore don’t forget to indulge in a food trip. Ask Charles for recommendation!” Got this email from my friend BOBBY LOZADA:

We too were at the GP last Sept. 22. While the Bay Grandstand, mentioned by Anton is a good place to watch the race, it is a slow portion of the track because of the relatively short straight in front of it. Since the Pit Grandstand is horribly expensive, I would suggest buying the Walkabout ticket, where we were (for a considerably lower price than the Bay GS). If you position yourself well, you can watch across the Connaught GS (which is the second costliest GS and priced a little under the Pit GS, the costliest GS).

The straight leading to the Connaught GS and the Walkabout is very long and when the racers reach this GS they are going at full throttle! Believe me, the wail of their engines are deafening in this section! And you may catch the shapes of the lead cars as they pass, but the trailing cars are but just a blur. I loved the scream of the engines at first, but after 30 minutes, I had to stuff my ears with tissue.