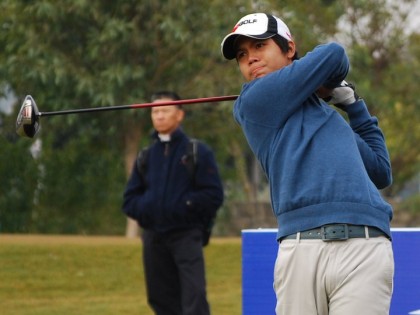 Jack Nicklaus won his 18th major at the age of 46. Jerry Barber, a former PGA Championship winner, played a PGA Tour tournament (the ‘94 Buick Invitational) — at the age of 77!

That’s before. In this era of Instagram, Twitter, Galaxy S4 and Guan Tianlang, it’s all young and new.

You’ve read of Guan two weeks ago. At 14 years old, he became our planet’s youngest human being to have made the cut in a major championship. “It’s frightening to think that he was born after I won my first Masters,” said Tiger Woods, now “old” at 37.

Golf today is about the youth. Ask Jovi Neri. The young lawyer’s jungolf program at the Cebu Country Club has cultivated dozens of champions.

Angelo Jose “Gio” Gandionco is another young phenom. The son of Opep and Cora Gandionco, Gio is now enrolled under a golf scholarship at the Santa Clara University in California.

A multiple Philippine junior golf champion (and major awardee during the 31st Cebu Sports Awards), Gio spoke about his co-golfer from China.

“I played with him (Guan) in a practice round for the Callaway Junior World Championship in Torrey Pines last July,” said Gio, who’ll turn 18 in June. “For him to make it to the Masters at 14 and to make a cut is such a huge accomplishment for him and for the junior golfers in Asia. I was really amazed with the way he played the game, especially knowing that he had won the Junior World in a younger age division the year before by I think more than 10 strokes.”

Gio is motivated by Guan’s achievement. If a 14-year-old can do it, says Gio, why cant I? “My teammates and I talk about him and we were all shocked to see Guan performing well considering the pressure he was going through.”

Adam Scott — 18 years older than Guan at 32 — is another hero Gio admires. After last year’s collapse at the Open Championship, Gio expected the Australian to rebound. Adam Scott did — winning The Masters. “He has always been one of my favorite players,” Gio said. “He has a great swing and maintains his composure throughout the whole game.”

COLLEGE. Our talk shifted to his collegiate freshman year living in America. Thus far, with the Santa Clara U. team, he’s competed in Washington, Arizona, Oregon, all over California and even in Mexico.

Santa Clara is a private (non-profit) Jesuit school based in Silicon Valley — the “world’s technological capital” that houses Google, Apple and Yahoo! Gio calls the school “not too big or too small” (about 5,000 undergraduate students and thousands more in grad-school).

In golf, they were seven players (now down to five because one quit and another didn’t reach the required grade point average to play as a student-athlete).

“I have qualified and played on the traveling team for each tournament this year,” Gio reports. “I have had 3 top 20 finishes, two of which were in the last tournaments of the year. I made a pretty good finish in our West Coast Conference Championship just last week being the only one from my team to get a 2013 All-West Coast Conference Honorable Mention.”

Gio’s schedule is all academics and golf: “MWF, I have class from 8-12 then golf practice from 1 to when ever it gets dark (which is about 6-7pm),” he said. “On Tuesdays and Thursdays, my team has 6am workouts followed by class from 8-2 then golf practice when it gets dark.” During his slack time, Gio studies and plays another round of golf on Saturdays. On Sundays, he rests.

“Being a Student-Athlete isn’t all easy, it takes a lot of hard work and sacrifice,” he says. “It takes time and effort to practice golf and study regularly especially if you’re traveling every week. But despite the hectic and busy schedule, I am still able to maintain my grades.”