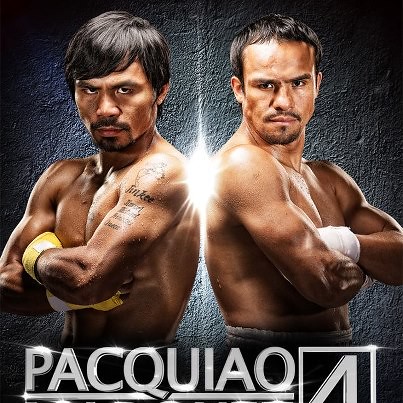 Manny Pacquiao will turn 34 years old in 11 days. In boxing age, he’s a “Senior Citizen.” This Dec. 8 will be Manny’s 61st boxing fight. That’s what the official record states. But when you count all those side-street, pustahan-type small bouts, he must have boxed 1,001 times.

Training? Twice, I watched him inside Wakee Salud’s gym in Labangon. He skip-roped. He rocked his back up and down doing sit-ups. In sparring, he deliberately raised his arms so that the sparring partner can pound — and strengthen — his abdomen.

If Pacquiao were a car, he’d be a Porsche 911. Speedy. Muscular. Low-flying. Packing an engine whose oomph can top 450 horsepower. But, as furious and fast as this Porsche is, it’s not the 2012 “911 Turbo” series; it’s the vintage 2001 model. It’s not brand-new. And, like Pacman, though it’s still power-packed and fast, it’s getting old.

Manny is getting old. We saw it against Mosley, Marquez, Bradley. He’s sluggish — nowhere near the peak days when he bloodied De La Hoya, Hatton, Cotto.

“Pacquaio should retire after this fight,” said Monico Puentevella, the former Phil. Olympic Committee Chairman (he lost last week in the POC elections to Tom Carrasco).

“I believe Manny will win this Sunday. But, after that, what’s next? He should only fight one more time if it’s Mayweather. But if not, then he should retire.”

Monico, who is running for mayor of “The City of Smiles,” is one of Manny’s closest friends. Almost every fight of Pacquiao the past six years, Puentevella has flown to the U.S. to watch. The only time he missed the live watch? “Against Bradley last June, I wasn’t there,” he said. And we know what happened, right? Manny lost.

This Sunday? “I can’t make it again,” said Monico. Oh no, I told him yesterday. What if Manny loses again — you’ll be the jinx? He laughed. “I’m calling Manny later today (that’s yesterday),” he said. Pasyensya na (So sorry), he’ll tell him. He had to stay home in Bacolod and be here during Typhoon Pablo.

Monico made a prediction. With Manny nearing 34 and Marquez turning 40 next year, there won’t be any knock-outs this weekend. No KOs. I agree. Plus, weren’t Pacquiao’s last five fights all 12-rounders?

“If Manny wins against Marquez, the problem is the same one we’ve had: what if Mayweather won’t fight him? Who’s next?” The answer: Nobody.

“That’s why, after this fight, I’ll sit down with Manny and advise him to quit. Quit to preserve your dignity, record and supremacy. Quit while you’re ahead. There’s no more use fighting.”

Monico recalled the harrowing experience of Z Gorres. “One punch is all it takes to put a boxer in that wheelchair for life,” Monico said. “Damo ka naman kwarta (You have plenty of money). You’ll only hurt yourself.”

This means that — granted the Sarangani congressman will listen to the former Bacolod representative — that this Sunday may be the final “Las Vegas” curtain moment of MP.

I know we don’t think about it. Manny’s fought world title bouts twice or thrice every single year since he burst into the boxing world in 2003 (against Barrera) — that we don’t contemplate his retirement. But it’s coming. Soon.

“The only complication is if Manny loses to Marquez,” said Monico. “And you know who would be so happy? Bob Arum. He wants that Game 5. We know Arum doesn’t have anybody else to fight Manny, so he’d prefer a loss now and a Game 5 next year. But everybody’s tired of Pacquiao-Marquez.”

Monico knows and loves boxing. “My goal is to build the best boxing gym in the Philippines,” he told me. “If elected mayor, I’ll rebuild the old basketball gym at the Bay Center, fronting the Plaza, and will convert it into a world-class facility. We’ll hire a Cuban coach and to bring boxers from nearby Cadiz, Bago, Manapla and Himamaylan. Then we’ll revive what Bidoy Aldeguer and I used to do… bring boxers to Cebu and bring yours over to Bacolod.”

Monico’s analysis on Manny? It makes sense. Win on Sunday then convince Mayweather. If he won’t dance, forget it. You’ve got the billions to buy a brand-new Porsche 911.