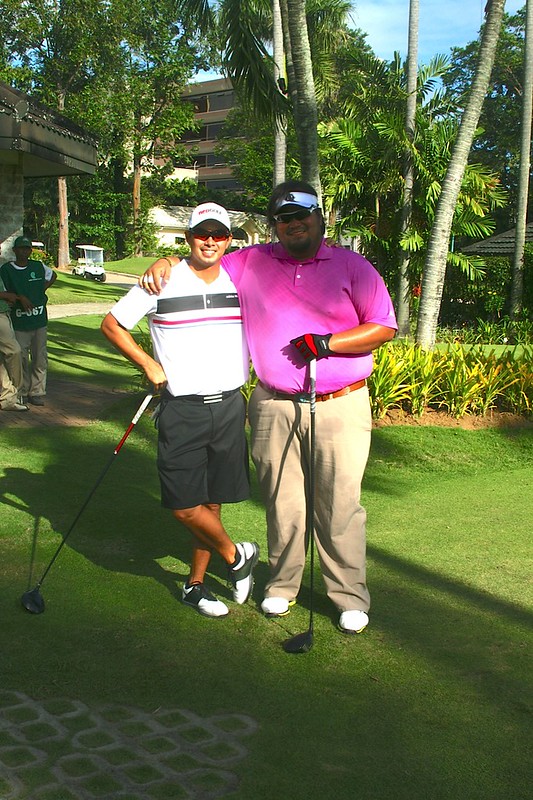 We were schoolmates at Cebu International School. We share the same birthday. And, whenever I need golf analysis, I always e-mail the same person: Marko Garcia Sarmiento.

At the manicured lawns of the Cebu Country Club, few people can drive that ball farther. Averaging 290 yards off the tee, Marko, 34, started swinging clubs at the age of 10. By college, he decided to study the one course that specializes on the golf course: at North Carolina’s Methodist University, studying Business Management with a focus on Professional Golf Management.

“Marko has won every major CCC tournament except the most major one which was the club championship,” said Atty. Jovi Neri. “So it was always a goal that he wanted to win badly for a long time.”

Last week, the 2012 CCC Club Championship unfolded. Sixteen of CCC’s best participated. After the qualifying rounds, Mr. Sarmiento — with rounds of 74 and 71 — took the second-highest seed, just a stroke behind Mark Dy.

In the match-play format, Marko played Marco Mendoza in the first round. He won 6-up. In the quarterfinals, the opponent was the one man nobody wanted to face: Eric Deen. The “Dean of CCC Golf,” Eric was not only a 6-time CCC champion but he had won the last two years. In the only time that Marko and Eric played in a match-play format, Marko got clobbered, 5-down. “The match against Eric was the most nerve-wrecking,” admitted Marko. “He’s arguably the club’s best player and has been for many years.”

In the 18-hole contest, the battle started as expected, with Eric leading. Although Marko was playing well, he wasn’t putting well. But, as fate would have it, Eric bogeyed two of the last three holes while Marko parred. “I finally made my first meaningful putt and it couldn’t have come at a better time,” said Marko. “I had a 15-footer for par on the 19th hole and made it, while Eric missed his 10-footer.” Game, set, match. Marko wins.

Next up in the semi-finals: Gen Nagai. Both played well and, after hours on foot, with Marko scoring under par (gross) and Gen at even par — with most of the holes won by birdies — it was Sarmiento who edged Nagai, 2-up.

Now, after beating the 2011 Class B champ (Mendoza) in the first round, then the 6-time champ (Deen) in Round 2, and the CCC junior club winner (Nagai) in the semis, Marko had the face the 2009 champion, Bayani Garcia, in the 36-hole, early-morning-until-late-afternoon Saturday final.

It was a showdown between two of CCC’s longest hitters. The day before the finale, Marko asked for advice from his uncle, the CCC president and 8-time champ, Montito Garcia, who told him to stay close in scoring to Bayani in the morning (first 18 holes). 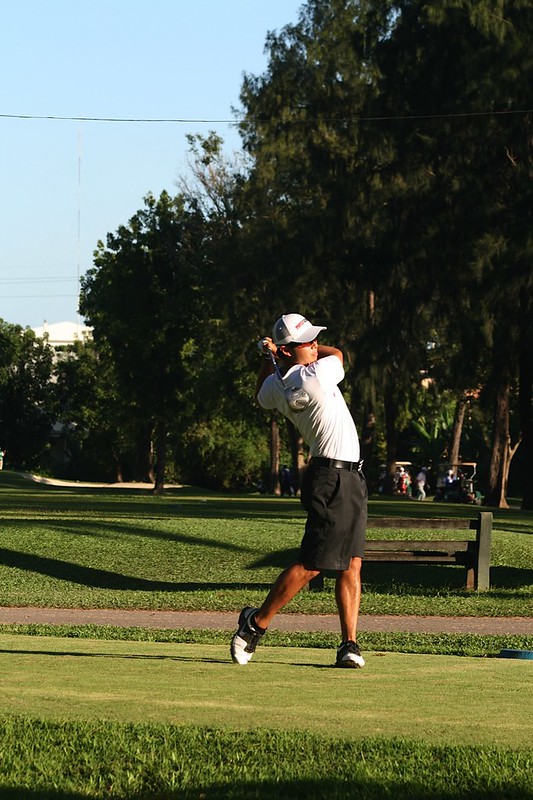 The good nephew followed his Tito Mon’s words, leading 3-up before lunch. But the morning was not without drama. “Before teeing up for my drive on the 8th hole, I realized that the shaft of my driver broke!” said Marko. “It was a freak accident since I hit a perfect drive the hole before and didn’t notice anything wrong with the club after I hit that shot. Nevertheless, I was rattled because my driver is my most important club. Thankfully, the rules of golf state that a replacement club can be used as long as the club was not broken with any intention. My wife hurried from the house to bring me my backup and order was restored.”

When played resumed on the 19th hole, Marko’s smile widened. He birdied to go 4-up. But then, Bayani improved while Marko’s game faltered. In the next three holes, Bayani won. From a 4-point advantage, it was down to one. By the end of the 27th hole, the match was all-squared. “Bayani had me rattled,” said Marko. “Losing a 4-up lead after 9 holes will do that to a golfer.”

On Hole No. 28, both made long putts for birdie. But on the 29th, there was a reversal of scores. Bayani birdied! For the first time, Bayani took the lead. Finally, with just three holes left to play, Bayani led 1-up.

That’s when — on the 34th hole — the steely nerves of the 34-year-old Marko emerged. He birdied Hole No. 34. The match was all-square. Then, when Bayani hooked his tee shot in the rough (which led to an unplayable lie and a one-stroke penalty) while Marko parred, it was Sarmiento with the lead.

“We both hit perfect tee shots,” said Marko, of the 36th and final hole. “Bayani was 1st to hit and calmly hit the green and left himself a lengthy but makeable putt for birdie. All I wanted to do was par the hole and force Bayani to make his birdie putt. I was able to find the green in 2 but still had about a 30-footer for birdie, which under pressure, could have easily led to a 3-putt bogey. I was first to putt and making it was the last thing in my mind since a par would have pressured Bayani in making a difficult putt for birdie.”

“The golf gods were with me that day,” continued Marko, “and there was nothing they owed me but in what was easily the best golf feeling I have ever experienced; the putt went in and the match was over! Absolutely amazing. My family was there to witness it with me which just made for a perfect ending to a epic day of golf!” 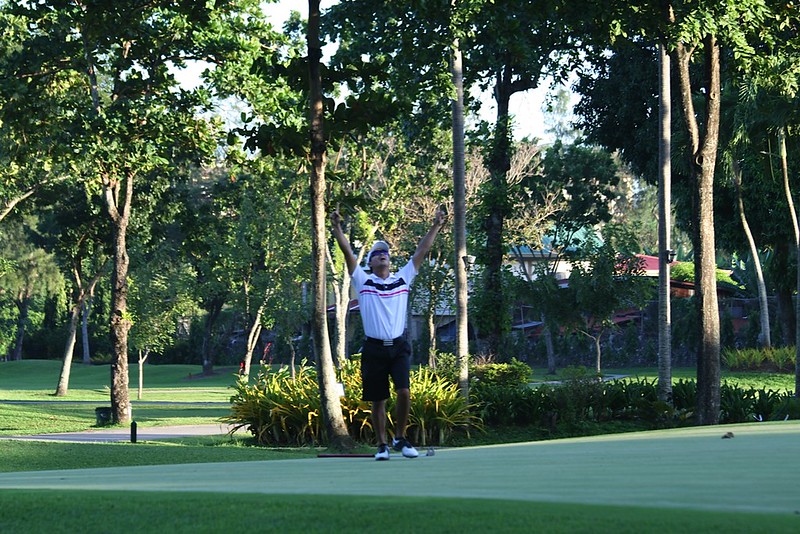 When I asked Marko — the ever-smiling husband of Aimil Gonzalez and the proud father of two boys: Lucas, 7, and Andres, 2 — if the achievement of seeing his name etched in CCC’s hall of champions has sunk in, he said: “I can’t even describe it. I see that wall every time I’m in the club and I always wondered when I would win it. In the past I felt like it was owed to me but this time around my expectations were much lower. I would tell myself that my time would eventually come and honestly this is when I expected it the least.” 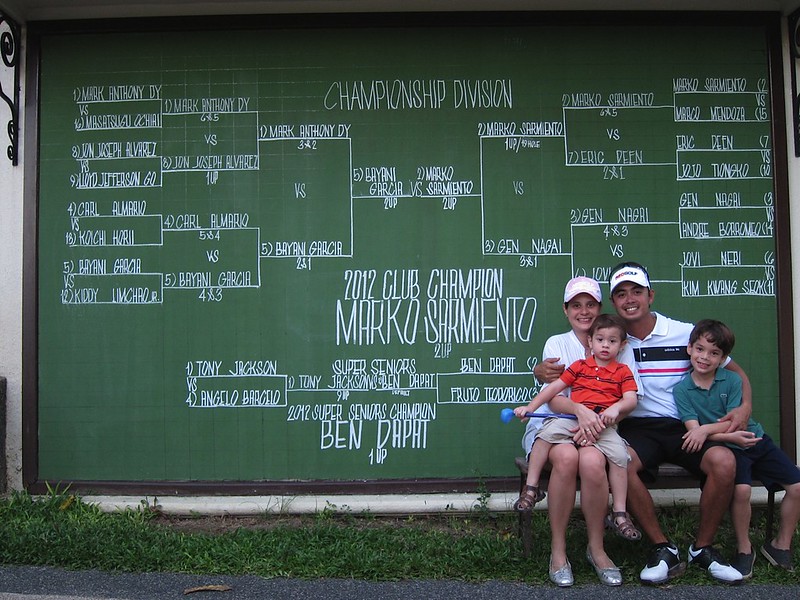 What’s ironic is this: Just a month ago, Marko was playing his worst golf in years. “My handicap jumped from 3-5 in the month of October and I was struggling to break 80,” he said. But then, don’t our greatest moments often come when we least expect them? Same with Marko. After that slump, his game rebounded, with him scoring the lowest gross title (69) in the Tomodachi Tournament. “My expectations were low and my confidence was high,” he said. “I think this is deadly combination to winning!”

“Working with these two US-trained professionals, Marko was able to fix his swing and knew exactly how it affected his ball flight since there was accurate measured data determined by the Flightscope,” said Atty. Neri. Congratulations, Marko! 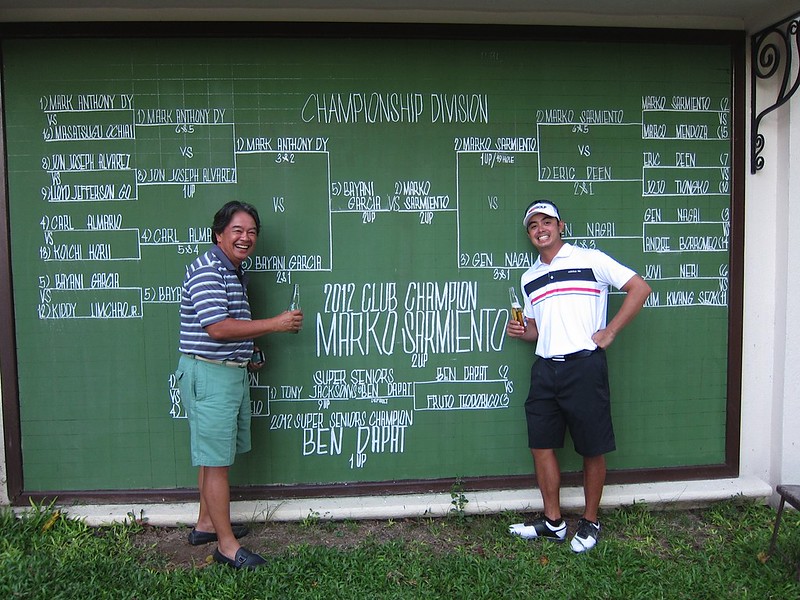 Father and son: Efren and The Champ