… Potholes on the road.

I met Guy Concepcion yesterday. After he landed in Cebu from Manila, he traveled straight to Marriott Hotel and partook of their lavish buffet. We sat down after breakfast at 9:10 A.M.

Rene “Guy” Concepcion is no ordinary guy. Next to Fred Uytengsu, Jr., he’s the man behind the Ironman 70.3 in Mactan. He’s also an Olympian, having joined the 1988 Seoul Olympics as a swimmer together with Akiko Thomson and Eric Buhain. 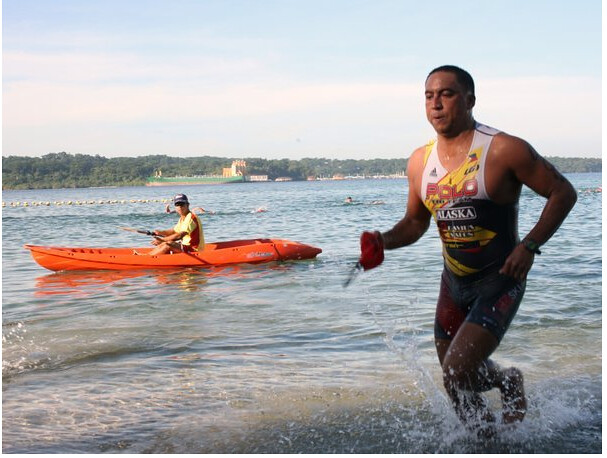 If you think 1,700 is plenty—think again. Hundreds more wanted to participate. (This, despite the hefty $275 fee.) That number could easily have ballooned to 2,500 had all the waiting list and interested first-timers been accepted.

“We want to limit the number this year,” he said. “Next year, if all goes well, we’ll accommodate more.”

Guy is in-charge of the race operations. And since two of the country’s biggest triathlon races are held in Cebu this 2012—the XTERRA last March and the Ironman 70.3 in August—then he’s been to Cebu dozens of times thus far.

“Welcome back!” I told him. Welcome back? he asked. “I’ve been here too many times!”

Thanks to the active participation of Gov. Gwen Garcia, all preparations are in place. Last week in Manila, Gov. Gwen sat beside Mr. Uytengsu and Lapu-Lapu City Mayor Paz Radaza in a glitzy launching at the Shangri-La Hotel in Makati.

Guy’s only concerns? Potholes. No, not the ones in SRP. “When I saw those huge holes at the SRP a few months back, we were concerned. Imagine the cyclists traveling at 45-kph passing through those? That would be scary. But thanks to the DPWH and other agencies, they’ve been asphalted.”

As to the rest of the Cebuano public, those who won’t be joining but are interested to join the revelry?

“Please cheer! This is such a huge event for Cebu and for sports and it’s exciting to watch,” he said. “Spectators can line up the roads along the reclamation area. If one leaves very early, one can be in Mactan to watch the bike and run portions.”

Inconveniences? Plenty of areas will be closed to traffic—half of the M. Fernan Bridge, the entire SRP, portions of the Reclamation Area, most of Punta Engaño—from 6 to 11 A.M. on race day. (Proper advisories will be posted soon.) Access to Mactan and the airport, though, will still be open.

“We ask for patience and for the Cebuanos to come out this August 5 to support and cheer,” said Guy. “Cheering means a lot to the participants, many of whom are foreign athletes.”

Apart from the Cobra Energy Drink Ironman race—which will fire off 32 days from now—Guy and I talked a lot about other sports stuff.

Like swimming. Guy joined the 10K Fina Marathon Swimming World Cup in Israel last April. He timed two hours, 40 minutes. (In most local triathlon races, Guy is the first one off the swim portion. At the XTERRA race last March in Liloan, he clocked five minutes in the 500-meter swim!)

We talked about Michael Phelps vs. Ryan Lochte. “Phelps has a way to elevate himself during the big occasions,” said Guy. “Expect him to win again in London.”

Finally, in one of those you-won’t-believe-who’s-joining moments, Guy revealed that one international superstar will be joining our Ironman.

The celebrity? (Hint: Not Lance.) Soon, Guy will announce that guy’s name.