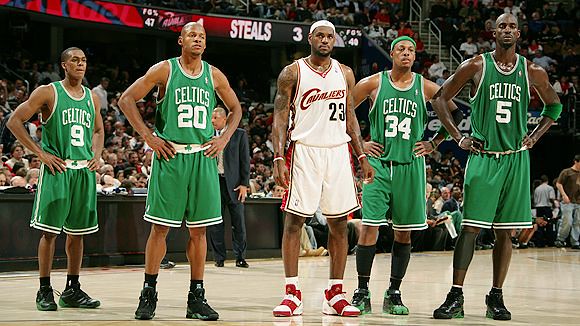 Who would have thought. Who’d have guessed. Who’d have expected that, with all eyes focused on The Favored Two, that The Forgotten Two will meet in the NBA Finals. No, it’s not over yet. And, no, I have nothing against the Celtics and the Thunder. But, who’d have predicted such an ending?

I bet even the two Kevins are surprised. Yes, that’s Durant and Garnett—long lost Kevin brothers—who, after their teams were forgotten when they trailed 0-2, are now just 48 minutes away from meeting each other.

Kevin and Kevin. Nice starring names, no? What a true-to-life, the-ball-is-round and anything-can-happen scenario. This upset in the making has upset all kinds of predictions. But, just like our conversation 48 hours ago with Coach Yayoy Alcoseba, the home-court advantage both Boston and Oklahoma enjoy are not advantages—unless they take advantage of it today and tomorrow.

This is why the most thrilling type of entertainment is still the same. It’s these very pages that you’re reading. Sports. Anything can happen. Chris Bosh returns and loses. The San Antonio Spurs are on a 20-game winning streak and they lose three straight. Paul Pierce, relegated to a improbable one-on-one match up with LeBron James, fires a three-point shot (in LBJ’s face!) with seconds left to win Boston the Game 5.

Isn’t this entertainment—Sports—incomparable? We never know the ending. We still don’t. If the Spurs win today and the Heat scorch the Celtics tomorrow, the momentum shifts to the other side. The pendulum will swing. If. This is why the word “momentum” is so important. When you’re riding that rolling ball and it keeps on turning and gaining speed, don’t stop. Pedal faster.

My predictions? I pity LeBron. Since last year, he’s been castigated. He’s a nice fellow. He just got wrong advice last year (trumpeting his transfer from Cleveland to Miami). I hope the Heat win tomorrow and make it. I cannot imagine the pain LeBron will suffer if he loses again this 2012. OKC and SAS? I want a Game 7.

FRENCH OPEN. So far, Rafael Nadal has looked invincible. Out of the seven years that he’s played in Roland Garros, he’s won six. Three nights ago against clay-court specialist Juan Monaco, he won, 6-2, 6-0, 6-0. Nadal is tenacious and relentless. He sprints like Usain Bolt but runs for hours like a Kenyan. He’s left-handed. His topspin is heavy with lots of extra allowance over the net. If God created Michael Phelphs for the pool, He molded Nadal for the clay court.

Roger Federer and Novak Djokovic? The two are still alive. They’ll play in the semi-finals tomorrow. Novak escaped from four match points down against Tsonga and won. Federer was down two-sets-to-love against Del Potro and won. Roger and Novak—plus Rafa—are the best because of one reason: their mind. Sure, tennis often lasts five sets and is physically tiresome. But it’s all-mental. And, mentally, the world’s top three are strongest.

Ladies? I hope Maria wins. Because while Sharapova has won the three other Grand Slam titles (Wimbledon, the U.S. and Australian Opens), she has yet to win on the red clay of Paris. The 6-foot-2, 130-lb. Floridian will have an easy path. Serena is out. Li Na is out. So is Azarenka.

BRADLEY-MANNY. Sylvan “Jack” Jakosalem, the former City Councilor and now-CITOM chairman, is an astute boxing observer. Commenting on the fight this Sunday, he said: “I watched two full fights of Timothy Bradley (v. Casamayor and Devon Alexander) plus many highlights. He’s got excellent defense and a very strong chin, which are the major reasons why he’s undefeated. He also has power but lacks the speed. But what Pacman should watch for are his head-butts because he likes to lunge forward with his head. If Pacman can restore himself to his condition when he fought Cotto and Margarito, then it’s TKO by the 10th. But if he gets to play it too safe like in the Marquez fight, then its Unanimous Decision. But for sure it’s Pacman!”