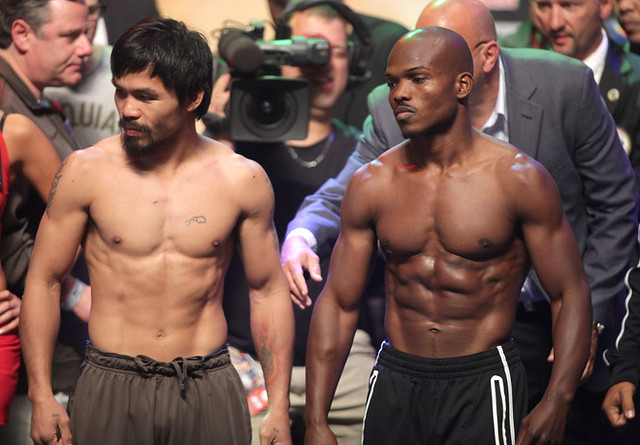 It’s not just Manny Pacquiao who’s fighting today. There’s Boston vs. Miami in the do-or-die Game 7. And, if that’s not enough, last night we had Maria Sharapova winning (M. Jerome Limpag hopes!) and, later this evening, an epic French Open ending between Rafa Nadal and Novak Djokovic. All within 24 hours.

Mallorcan? That’s Nadal. He’s from the resort island of Spain called Mallorca. Why is the battle against Djokovic of legendary proportions? Because if Nadal wins, it will be his 7th Parisian title—a record. But, if he loses, it will be Djokovic who will record a masterpiece: He’d have won his 4th straight Grand Slam crown—all against the same fallen enemy, Nadal.

I pick Spain over Serbia. Though Nadal lost to Djokovic in their last three Grand Slam finals meetings, it’s the Mallorcan who has looked unbeatable the past two weeks. He hasn’t lost a set. He’s 51 of 52 matches (career) in Roland Garros. He’s also beaten Djokovic in their last two encounters. Tonight, watch Nadal-Djokovic at 9 P.M.

MARIA. Is there a female athlete who’s prettier? Taller? With more slender legs and flowing blonde hair? Than Ms. Maria? None. That’s why the most celebrated sportswoman is the 6-foot-2 former Russian native who now calls Florida home.

At the French Open, with the early departures of Serena, Schiavone, Azarenka, Venus & Co., it’s been an easy path for Maria. And, with Stosur losing to the unknown Sara Errani, it should be an easy, two-set victory for MS.

MIAMI. Nobody wants that NBA ring more than LeBron Raymone James. Drafted as the No.1 pick in 2003, he’s waited every month of June for NBA Commissioner David Stern to hand him that most precious jewelry. But each year, LBJ has been relegated to Groomsman (“always the contender, but never the Groom”).

Will June 2012 finally be the moment? It depends today. Because if the Heat sizzle and sauté the green peas called Boston, and with Chris Bosh returning fully by the NBA Final, then, yes, LeBron will pocket that NBA Championship.

Statistics? Miami is 7-2 at home in these playoffs. Boston is 3-6. This is problematic for Paul Pierce & Co. Plus, the return of Bosh appears to have troubled Kevin Garnett. In Game 6, he shot a dismal 12 points and rebounded only five times. Bad numbers.

Destiny is etched in the fingertips of LeBron. He will shine today and meet Oklahoma beginning June 12.

MANNY. A big fan of the Celtics, Manny will be watching (from inside the locker room) his team lose to Miami. But this won’t affect Manny.

Today in Las Vegas, Manny is aiming for his career win No. 60. He’s drawn twice and lost thrice. But the most important statistic? This one: Not since March 19, 2005 has Manny lost a fight. That’s seven years ago. Since that Erik Morales UD loss, Manny has won 15. Today, he’s gunning for Consecutive Win No. 16. In this era when, after each strong opponent, you fight another who’s bigger, faster, better—this 15-fight streak is unprecedented.

Two specific numbers interest me. One, that Manny is heavier than the other guy. This isn’t normal. When was the last time it happened? At 147 lbs., this is Manny at his heaviest. Also, the height. Used to seeing the Margaritos and De La Hoyas who’d stare down at our Pinoy superhero, this time, it’s Manny who’s taller than Bradley.

Money? Wow, what a disparity. Anybody who’s not ultra-famous who fights Manny gets $5 million. While this is huge, it’s minuscule compared to the $26 million guaranteed (plus PPV extras) for Manny. Boxing is big business. (By comparison, Nadal has earned $48M—in his entire career.) Manny earns more than 99 percent of the world’s top athletes—in just 36 minutes, max.

Will this be Manny’s last fight? We never know. With Manny now a Bible-loving and God-fearing Christian, who knows if he’ll forever say goodbye to boxing. While unlikely, we never know. That’s why we should treasure these few noontime hours. We have never—and will never again—see the likes of Pacman.