Rico Navarro is one of the nine members of the new Board of Directors of the Cebu Football Association (CFA). The other CFA officials include Ricky Dakay, Joey Herrera, Fr. Heinz Kuiueke, Rodney Orale, Raffy Musni, Nimrod Quiñones, Glenn Quisido and Michael Veloso. I heard that the election, held last Saturday, was highly politicized. From the original 25 voting members, the number ballooned to 43. Cheska Geli wrote a story on this two days ago; Mars Alison of CDN did the same. Let’s hope the new CFA Board will be able to fulfill one of the most often-used terms in football clubs (Manchester U., Don Bosco U., Queen City U.).

The word? UNITED. Let’s kick politics out of football.

Back to Rico: will he? I mean, as suggested by Mike Limpag a few weeks ago, will Mr. Navarro become the CFA president? Maybe. Maybe not. But here’s one fact: in sports, this tall, giant of a sportsman has made an impact in Cebu. Not only does Rico lead the athletic program of Sacred Heart School – Ateneo de Cebu, he’s helped a lot in basketball.

I wrote about the Cebu Youth Basketball League on Palm Sunday. The CYBL is a brainchild project of Rico and, starting in 2007, it has evolved from four teams to 42 today.

One of the additions to CYBL 2012 was the Under-19 category, which ended last Thursday. “The U19 final was the second down the wire championship game in 2012 but it was hands down the best ever game in CYBL history,” said Rico. “The U10 finals was also a thriller where Job Reyes (Coach Mike’s son) made two free throws with 47 seconds left to lead USC South to a 32-31 win over USC North. We also had an OT thriller in the U16 championship game of 2011 when USJR defeated USC North.”

What happened in the U19 final? Adgers Sportswear was leading University of San Carlos/RDAK by six points, 75-69, with only five seconds left. They celebrated. Victory was theirs. Five seconds to go! A six point lead!

But not so fast. “Michael Rita drilled a double-pump triple with 4.5 seconds left in the game to cut the lead to 75-72,” said Rico. “And after Adgers failed to control the leather to run out the clock, John Saycon made a ‘Hail Mary’ triple from beyond the half-court line. He shot the ball from about 16 meters away from the ring (note that the full court is 28 meters long).” 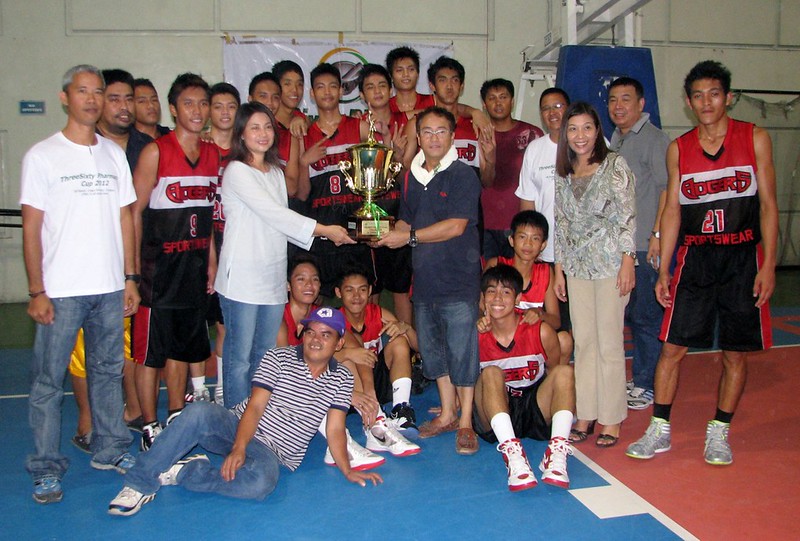 I spoke to Rico the day after the U19 finals and he was ecstatic. He had never witnessed a game as electrifying. More details on CYBL 2012? “The tournament started on Jan. 23 and ended on March 29 (U19 finals). However, the U10 & U13 games ended on Mar. 3, while the U16 finals was on Mar. 10 (to stay clear from the 4th Qtr Exams),” Rico said. Main CYBL venue: SHS-AdC Mango Ave Campus. Satellite venues: Don Bosco, USC South Campus & CEC.

“With our expansion, Medellin Secondary Schools Athletic Association (MSSAA) is now a regular participant in our tournaments, thanks to Vice Mayor Al Lim. They traveled every week to Cebu to play in the CYBL,” he added. “We also initiated CYBL Visayas Goodwill Games in June 2011 when we hosted St. John’s Institute of Bacolod. The faced SHS-AdC, CEC & USC North in a pre-season friendly tournament for the U12 age group. In the works: Ateneo de Davao is coming over in May for a Vismin Goodwill Games. We’ll also invite St. John’s Institute Bacolod, USLS, & Ateneo de Iloilo.”

Looking ahead to 2013, Rico’s group plans to hold a yearly coaches’ seminar with the help of Ateneo de Manila. “Cebu needs this,” he said. “Our coaches are left behind by their colleagues in Manila in terms of professional development (technical know-how, coaching philosophy, people/player management, sports psychology). Also, we need to spread the base to Mandaue & Lapu-Lapu.”