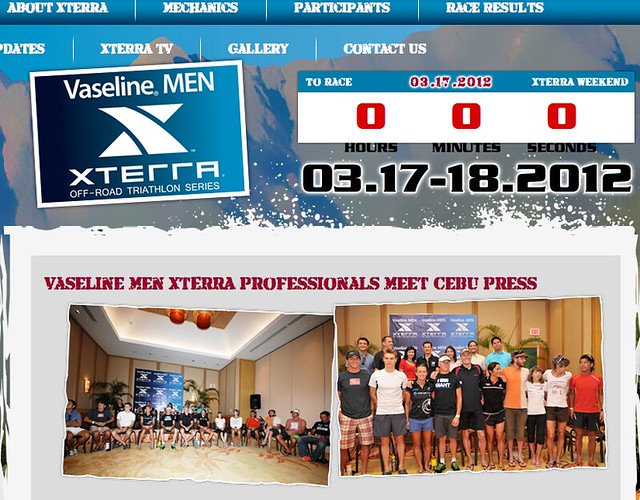 As one of the hundreds of participants of this weekend’s Vaseline Men XTERRA Off-Road Triathlon Series, here are some points…

RACE PACKS. Within the first hour when the race kits were released last Friday, I made sure to visit the Holiday Spa. After paying P3,800 to register, you’re expected to receive plenty of freebies. True enough, this international event did not disappoint. A race cap, running belt, two GU gels, a temporary tattoo, plus a pair of 2XU compression socks were inside the bag. T-shirt? Not yet. Those will be given at the finish line. Courtesy of the mayor, Titay’s rosquillos and goodies were part of the giveaways.

The one that interested me most was the wrist I.D. After they give you the pack (Igi Maximo and I got our kits together), they put a neon-colored (yellow) race band on your wrist that can’t be removed (unless you cut it off after the event). Unlike race bibs for running that are easily transferrable, the non-removable wristband ensures that nobody else but “John Pages” uses my kit. Wise! Also, you get to sleep and dine with your race band for a couple of nights – adding to the excitement.

IRONMAN. Arland Macasieb is often described as the country’s Ironman. The first Filipino to cross the finish line at the 2011 Ironman 70.3, Arland has won gold in numerous events. Two nights ago at Justin Uy’s J Centre Mall, Arland gave a talk on triathlon. What sets Arland apart from any other triathlete-teacher is that he’s armed with a degree in Exercise Physiology. This means he speaks not only from first-hand experience but also with scientific backing. Given his packed schedule, it was commendable for Arland to share his time with the Cebuanos. Kudos to organizers Jerome Mil, Benjoe Gimenez and Great Adventures and Concepts @ Work.

THE BRICK. Tonight is the grand opening of the business of a top sportsman. Noy Jopson is formally opening his multi-sport business that caters to runners, bikers, swimmers. Visit The Brick at the lower level (beside Tablea) of J Centre Mall.

GOV. GWEN. Volleyball, horse-back riding, and airsoft have been supported, among others, by Gov. Gwen Garcia and the Provincial Government. Add “triathlon” to the list this 2012 as the governor supports XTERRA and Ironman 70.3. Last night at the CICC, after our race briefing at 6 P.M., she hosted a carbo-loading party for the participants.

SWIM. On a personal note… I’ve been biking since I was eight years old. I’ve been running since my elementary school-days. So biking and running come naturally. Swimming? No, no. It’s the one obstacle that has disallowed me from joining the Ironman 70.3. Thanks to the Lite version of the XTERRA (swim is only 500 meters instead of 1.5 kms.), I’m joining the race — as you read this today.

Fear? Sure. Last month, I accompanied Jacs Jacalan, Tenggoy Colmenares and Joseph Miller for a dip in Shangri-La. Bad timing for me that day, the waves were tall. No problem for my triathlete-companions, but major concern for me. I struggled. Held on the buoys and rope every five meters. It was excruciating; a far negative experience compared to the enjoyable mountain-biking or running.

But you know what I realized? Patience. While I’ve been running and biking for three decades now, my swimming habit only started two months ago. So I shouldn’t be overly optimistic—or put myself down if I can’t swim like a fish. This morning, I’ve lowered my expectations: will swim slow and easy. I’ll hold on the buoys and rope as often as my mind says so. It doesn’t matter if I finish late. What matters is I relieve the unnecessary pressure on myself. Relax. That’s another reminder.

Two mornings ago, I had a practice swim with top triathlete Ralph Sios-e at Amara. The waters were semi-rough. They weren’t as smooth as a lake. (We even saw a foot-long sea snake!) Still, being an ignorant, non-swimmer, this I realized: you float on open sea water. Little effort is needed to stay afloat. Said Ralph: “It will take more energy to drown that to float.”