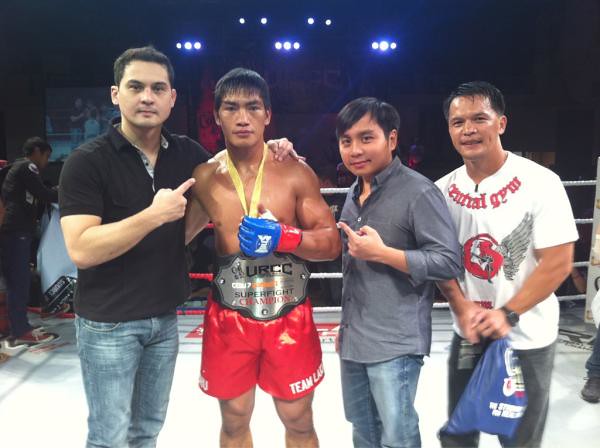 If you think boxing is bloody, watch mixed martial arts (MMA). With its ruthlessness and savagery, it makes boxing look like a ballet recital.

I watched last Friday. It was my first. Sure, boxing is noisy and full of energy—but you ought to see the Universal Reality Combat Championship (URCC).

The referee? After both fighters are ready to pounce, he shouts the famous line… BAKBAKAN NA!!!!

Then, they’re off. Like two pit bulls who’ve been hungered since Christmas, they’re ready to ravish. They batter each other’s faces. The elbow is not used for protection—but as a hammer to pound on the enemy’s open face. And, once a man is down, the other would swoop like a mad dog. He’d hop on top to punch and pelt and stab.

It’s animalistic. It’s legalized street-fighting. It’s no-holds-barred. Also, quite often, it ends very fast. Take the first fight: Alde de Soza won in Round 1 via the famous “Kimura Lock.” The battle was over in a few seconds.

That’s the beauty of this sport. As brutal as we see it on UFC, it’s also ended quickly if danger is sensed. Tap-tap-tap. That’s when the opponent taps-out to signal his surrender.

As cannibalistic and lethal as this sport is, that’s what makes it safe. The quick tap-out. If one is unable to sustain the pain, the response is easy: Tap-tap-tap. As soon as the referee sees that, the fight ends.

Still, it’s bloody. It’s vicious. Yet, the crowd is as happy as I’ve seen it of any sport. It brings out the fighting instinct of the predominantly-male crowd.

The best fight at CICC that night? No contest: the Cary “The Prince” Bullos vs. Rex de Lara bout. Almost all other fights (there were a total of eight) were finished in Round One. This ended up nearly the same way. Bullos nearly lost as he was choked by de Lara. The crowd gasped. Their local favorite (from Lapu-Lapu City) was near defeat. But he persisted. In Round 2, he swiftly performed the guillotine choke.

The most spectacular moment? Roel Rosauro’s “put to sleep” move on Arnel Ylanan. How? With just seconds left before the first round (there are only two rounds per fight; each round has 10 minutes), he jumped, spun a 360-degree move and, with his fist in high-speed motion, he pummeled the face of the blindsided enemy. “Spinning back fist,” it’s called and, instantaneously, Ylanan fell. Game over.

The main event? As a novice, I had not heard of Eduard Folayang until last week. Well, he’s a rockstar of the sport. He’s their Paeng N.; their Bata R. He’s massive. Not only was Folayang’s upper-body well-defined and bulky, but his legs—“they’re like VECO posts,” said Jingo.

Facing him one-on-one, you’d get scared. I bet that’s how Wadson Teixeira felt when they met. Standing in front of each other, even before “Bakbakan Na!” was shouted, it was a no-contest. It ended in 56 seconds. Folayang sat atop the fallen enemy and just pounded him, peppered him, barraged him with fists and elbows until the Thailand-based Brazilian was unconscious in Mandaue.

Given his build, strength and VECO-post-like legs, I wonder how he’ll do in the US, for example, fighting the likes of Frankie Edgar or Jose Aldo. Pardon my ignorance but imagine a Baguio City fighter in Las Vegas?

Congratulations to Renault Lao who, despite the busiest party week (he owns The Loft and Penthouse), organized URCC 7. My only complaint?

Why only one URCC event each year? Cebu salivates to see more.