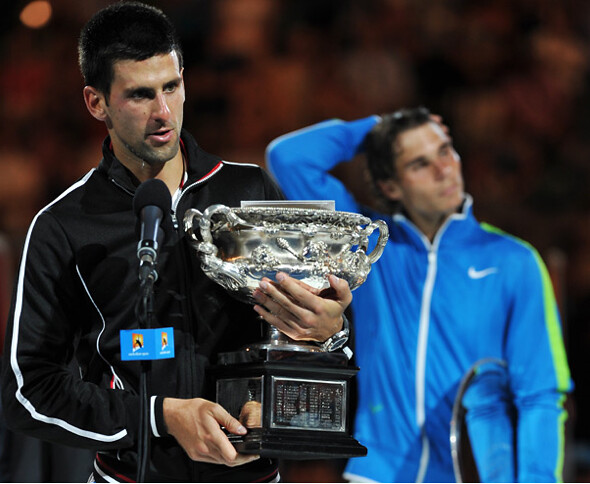 1) AGGRESSOR WINS. One of my dad Bunny’s favorite lines is this: “Play to win and don’t play not to lose.” True. For most of the match, Rafa was too defensive. He’d stay five meters off the baseline. He counterpunched. His shots landed short, midcourt. Novak would pound on them and run Rafa left to right like his dog from Serbia. To win, Rafa has to stay closer to the baseline and take risks. This is his only option against Novak. In sports—like in business—those who take risks, win. The bigger the risk, the larger the reward. Novak is the master risk-taker.

2) TRIVALRY. I’m talking about Novak-Rafa-Roger. Here are interesting stats: Between Rafa and Roger, it’s the Spaniard who dominates. Their record is 18-9 (8-2 in majors). It’s lopsided. But, between Rafa and Novak, it’s the opposite. Excluding their earlier contests, it’s been 7-0 since last year. So, Roger loses to Rafa who loses to Novak. (We’ll include Murray in the picture once Lendl aids him in winning a GS title.) Why does Rafa dominate Roger while being dominated by Novak? Here’s why: Roger’s single-handed backhand is his weakness. Rafa pounds on that side. But against Novak? His two-fisted backhand is, like Agassi’s, the best. Novak drills it crosscourt; he smothers it down-the-line. Novak’s forehand is even deadlier. Either wing, Rafa suffers.

3) EMOTIONS. This is what makes tennis so enjoyable to watch. It’s one on one. Unlike football or basketball when the focus is on 10 or 22 players, with tennis, it’s just two. And what facial expressions they display. Rafa winces. Rafa pumps his fists seven times after winning Set 4. Novak falls to the ground. Novak’s eyes turn smaller, a sure sign of extreme fatigue. Their personalities and feelings are in full display. No other sport shows mannerisms (“kuot sa lubot”) and expressions (Novak’s sign of the cross) like tennis.

4) MENTAL. Sport is physical yet it’s won by the mind. The toughest of all competitors, Nadal, was en route to winning his 11th Grand Slam title. He led 4-2 in the fifth set and had an easy backhand down-the-line. He missed. He missed the chance the avenge Novak. What guts the Serbian has. He limped. He collapsed. His knees wobbled. A jab by Jun Intor would have KO’ed him. But, no. Djokovic’s mind would not allow his body to collapse. What courage. To defeat Nadal mentally is Novak’s greatest strength.

5) MEN’S RIGHTS. We’ve all heard of Women’s Rights. I’m making up a new term. You see, the prize money of the champions of both sexes are the same. The winner each gets 2.3 million Australian dollars. In pesos, that’s P105,000,000. But here’s the interesting part. While the men’s final took 5 hours and 53 minutes, the women only took 82 minutes. This means that Novak was paid P297,450 per minute while Azarenka was paid a whopping P1.28 million per minute on court!

6) DAVIS CUP. Remember our two Davis Cup hostings last year at Lapu-Lapu City? In the first one last March 2011, it was the Phils. vs. Japan. The head of the ITF delegation who arrived to preside over the ‘Battle of Mactan?’ His name is Wayne McEwen. Well, this guy is Graeme Mackinnon’s country-mate and he was one of the top officials running the Australian Open. It was Councilor Harry Radaza, in a text message last Sunday, who informed me that McEwen was in center-stage. True enough, in the Awarding Ceremony, McEwen stood alongside Nadal/Djokovic. Nice guy, this Wayne, when we spent some time with him here in Cebu.

7) HIGH-DEFINITION. I’m talking about cable TV. I watched from the room of Charlie, my brother, and he subscribed to SkyCable’s HD channels. What a sight! On Channel 136 (ESPN HD), it’s as if you’re right there in the Rod Laver Arena.