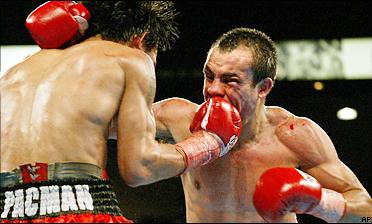 Seven mornings from today, traffic will halt. TV sets will be switched to full volume. Church masses at 11 A.M. will suffer few attendees. The crime rate? Down to zero. Movie theaters, previously empty before noon, will suffocate with viewers. The booze, San Mig Light, will ooze. Pigs will be slaughtered by the tens of thousands as lechon sales hit record numbers. Pinoys in America, many of them our cousins, will bond, laugh and congregate in reunions.

Hotels and bars will plant large screens and be smothered by spectators. Paris Hilton will watch. So will LeBron and Kobe. Surely, the Boston Celtics team, all friends of his and now in one-season-retirement, will cheer-on their Far East friend. Barack Obama, whose photo at the White House with Jinkee we’re still awaiting to see, might watch. He said so when the Os and the Ps met at the Oval Office.

Floyd Mayweather, Jr.? Of course. Only this time, he’ll salivate at the thought that, yes, had he agreed, it could have been him in Vegas facing our Manny.

Is it true? The May 5 date—the birthday of Salven Lagumbay—proposed by Mayweather as his fight night with Pacquiao? Ha-ha. We’ve heard this before. Loud mouth talks fast, dirty, nonsense. True. His mouth fires as fast as his fists. Do we believe his newest concoction?

No. It’s a way to steal some attention from Nov. 12, 2011. You know how Floyd covets adulation. When he’s not on the ring, he’ll create noise and uproar to channel the spotlight on him.

“Same old bull…” Bob Arum said. “The way they are going about it seems like a bizarre way to go about it. If you want to put it together, you meet, you talk. You don’t just come out and say, ‘The fight is May 5 at the MGM.’ What kind of negotiation is that? So I don’t take what they said seriously.”

Seriously, Floyd’s a joke. How about the suggestion of joker Jimmy Kimmel, whose “Jimmy Kimmel Live” show Mr. Pacquiao has visited, like a habit, in his last five pre-fight encounters? His proposal: Winner take all.

When asked if this was feasible, Manny answered, “I don’t think he will do it.”

What about you? Kimmel asked.

That might be a first. And won’t this gravitate this contest to the Greatest Ever of Sporting Events… besting “Thrilla In Manila?”

But first, before any thoughts of the 5/5/2012 extravaganza, the focus is on next Sunday. If you recall, Pacman will be aiming for his 15th straight victory. His overall record is 53 wins, 2 draws, 3 losses. The last time he lost was in March 2005 against his fellow SMB endorser, Erik Morales.

Against Juan Manuel Marquez in their Trilogy next weekend, everybody assumes a Pacquaio victory. This is the burden of the champ. A victory by Marquez is implausible. Have you heard of anyone, apart from the Mexican’s camp, suggesting that the 38-year-old will win? Nada.

“You could see fire in his eyes,” reported Manny’s coach of 11 years, Freddie Roach. How motivated is Manny? A first in all his training camps, he’s only had a day off to rest two times. Yes. In eight weeks of brutal punishment, Roach reports that his man has rested only two days.

Overtraining? Peaking too soon? And no controversies! Nah. It reminds me of the late Steve Jobs’ commencement address in Stanford. His main theme: “Stay Hungry, Stay Foolish.” Pacquiao has forever stayed hungry (and, yes, foolish). His “Congressman” title did not force him to relax on the boxing mitts. His P388 million home in Forbes Park was left unused because he had to train in Baguio and L.A.

Roach adds that he’s never seen Manny train like this before. (Yes, we do hear this in every pre-fight.) “Not even when he was preparing to fight Oscar de la Hoya,” confided the 51-year-old Roach.   All this translates to a quick, lopsided, one-dimensional, as-usual, yes-we’ve-seen-this-before victory by our Pinoy. I can’t wait… For the lechon.