Golf is difficult. Look at Tiger Woods. His knee is damaged, he’s world-ranked a lowly 49, his last title was 22 months ago and, at last month’s PGA Championships, he shot a 7-over 77. TW missed the cut.

LJ Go? He’s a cut above the rest. Spelled in full, his name is Lloyd Jefferson Go. You’d know he excels in one sport just by studying the initials of his name:

GO, LJ. G-O L-F. The two are nearly identical. It’s no coincidence that this 16-year-old Cebu Country Club (CCC) resident is one of the country’s most promising golfers. 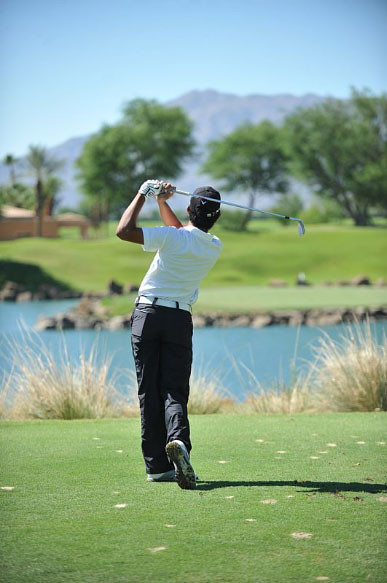 Here’s more… Last summer, after a string of successful tournaments in the U.S., LJ returned to Cebu all-confident. In Club Filipino’s President’s Cup, he shot a 68 and went home to his parents, Charlie and Lily, carrying the trophy. Next, he led his team to the overall crown of the Cheling Garcia Memorial.

“LJ’s impressive performance in America earned him the attention of NGAP (National Golf Association of the Phils.) director Tommy Manotoc, a legendary sportsman in his own right,” said Jovi Neri. “Manotoc personally selected LJ to play for the Philippine Men’s Team in the Putra Cup when Marcel Puyat had to beg off as he was entering Stanford under a scholarship.”

The 51-year-old Putra Cup is the Southeast Asia Amateur Golf Team Championship. “LJ was a 16-year-old junior playing for the Men’s Team in an international team event,” said Jovi. “No one can remember the last time a Cebuano was in the men’s team, definitely not in the last two decades and not as young as him.”

LJ also joined the Taiwan Men’s Amateur and came within a stroke of being the best Filipino campaigner. The Putra Cup, which finished weeks ago in Hong Kong? “His third round 70 was the best by any Filipino and his total was 2nd best among eight Filipinos – men’s and juniors – who played the course from the same tees,” said Atty. Neri.

What’s amazing is this: He is a national-caliber virtuoso who has chosen to stay sa probinsya. “LJ’s teammates in the men’s team have all come from national training programs funded by ICTSI,” said Neri. “LJ has never moved to Manila. He trains on his own in Cebu. His enjoyment of his student life in Cebu is the reason why he never traded it for home-schooling or transferring to Manila for training. He is an inspiration to young provincial kids who want to excel without leaving home.”

LJ first swung a 7-iron at the age of 7. He started under the tutelage of Raul Sorino, one of the instructors of the CCC Jungolf Program, then moved to his longest-serving mentor, Victor Macutay. Today, his coach is Andrew Ong.

A high school senior in Centre for International Education (CIE), LJ aspires to be a U.S. collegiate scholar. Adds Jovi: “Outside of the golf course, he lives an ordinary student life. But in the course, he is anything but ordinary. His exponential rise over the past few months—from a talented club junior golfer to a men’s national team top scorer—is nothing short of remarkable.”

How remarkable? Here’s a story supplied by Jovi Neri: “Last Sunday, I joined LJ’s flight with Gen Nagai, Gio Gandionco and Liloan Mayor Duke Frasco. In the front nine, he was out of his element hitting tops and shanks to find water on three straight holes. He even had a four-putt green and shot an ugly 8-over par 44.

“LJ picked it up in the back nine with five birdies and one eagle. He finished eagle-birdie-birdie, and won the September Junior Monthly Medal by count back (tie-break). His score (6-under par 30) is the lowest in nine holes I have ever witnessed in my 20 years of playing CCC.”