Everybody who wears red gloves, who clenches their fists, grits their teeth, and confronts this Filipino diamond named Manny Pacquiao says the same thing: I’ll beat that Man.

Everybody, at the end of the 3rd or the 7th or the 12th round, with eyes swollen, ribs mutilated, cheekbones tarnished—all testify in unison: Man, he’s too good.

The last time someone defeated Pacquiao? The year was 2007. His name wasn’t David Diaz or Ricky Hatton or Joshua Clottey. All those and many more lost to MP.

The last one? A she: Darlene Antonino-Custodio. That was fought in the political ring—an arena unlike Manny’s preferred stage.

With boxing, it’s been 14 straight wins for Pacman. Not since March 2005—or six-and-a-half years ago; against San Miguel Beer endorser Erik Morales—has our modern-day Jose Rizal experienced a loss.

This November 12, Manny is assured of Victory No. 15 in the same way that Ateneo will surely win the UAAP crown. It’s a future fact that we know today.

Looking back, the first time Juan Manuel Marquez battled Pacquiao was in 2004. The score was a draw. Then, the second time they punctured each other’s abdomens, J-M-M beat M-P. You and I witnessed it. Yes, it was a close, close war—but I thought our man lost. Yet… our Man’ won. That was 3 ½ years ago.

Two months from now, when the Mexican and the taga-GenSan meet again, it won’t be a perplexing debate to judge. Marquez is 38 years old. That’s way too young to be a grandfather—but way too old to be a fighter. Manny will ambush him; he’ll bat his head with his knuckles; he’ll bust his jaws; Manny will wallop every inch of Juan Manuel’s bare chest and face and bloody him down to the floor of Las Vegas.

Bob Arum, nearly 80, is boxing’s Mr. Experience. He knows and we know that, this November, Manny will use the Mexican as a punching bag for next year’s Mayweather quarrel.

TREAT HUEY is in the Round of 16 of the US Open. Today, he and partner Somdev Devvarman will play the Indian pair of Leander Paes and Mahesh Bhuphati. Their match is scheduled at the Grandstand Court. 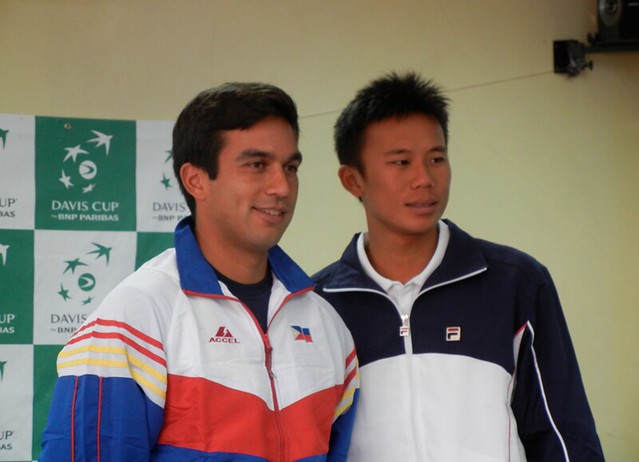 I’ve had the chance, exactly a dozen years ago this week, to sit on the hallowed chairs of the Grandstand Court. Unlike the Arthur Ashe Stadium, which seats 22,000, and the Louis Armstrong Stadium (10,000 capacity), the Grandstand Court (6,000 seats) is cozier. I hope their match gets shown on Balls TV.

Have you been watching the US Open? The early sleeper that I am, I haven’t. This event starts 11 A.M. in New York and, with our 12-hour time difference, this translates to an 11 P.M. beginning here.

I did watch portions of Novak Djokovic last Sunday morning. With his mental strength like that of UFC champion Anderson Silva, the Serbian world No. 1 aims to add a third major this 2011 to his Australian Open and Wimbledon victories.

Ticket prices for next weekend’s (Sept. 16 to 18) Davis Cup matches between our Philippines versus Taiwan (Chinese Taipei) start at P200. Yes. No typographical error there. That’s P200 for one full day of international sporting competition.

Why the low prices? “Cecil (Mamiit) is requesting that we fill-up the entire grandstand with Cebuanos,” said Philta’s Randy Villanueva. Last March, when we faced Japan, the clay-court at the Plantation Bay Resort and Spa was about 70 percent full. Not bad. But not good enough. Echoed Hon. Harry Don Radaza: “We want 100 percent capacity.”

You’ll be treated to the newfound confidence of Treat. You’ll observe the Michael Chang-like fighting spirit of Mr. Mamiit. You’ll witness, for the first time, the forehand of Jeson Patrombon and the smash of Ruben Gonzales.