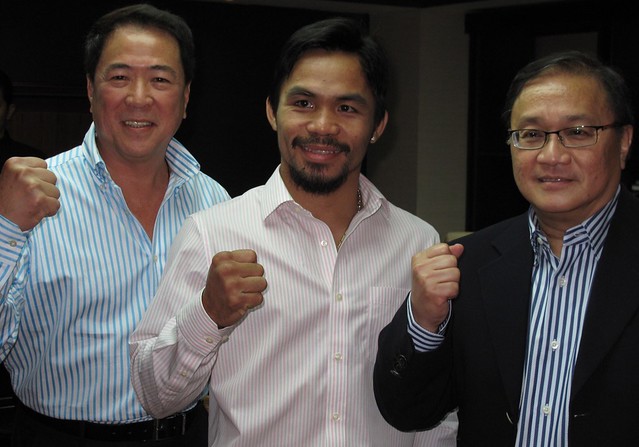 MannyPa. Manny Pangilinan is the MVP of our country’s world of commerce. Pitted against billionaires named Lucio, Henry, Aboitiz, Zobel, E. Razon, Gokongwei, Andrew Tan, and Cojuangco, the MVP of them all is MVP.

He may not be the richest. He did not inherit a 175-year-old company named “Ayala.” He’s not even married and doesn’t have children. But, if you make a survey among CEOs and ask who, among their fellow chieftains, is the most aggressive industrialist in today’s corporate setting, the answer is obvious: MannyPa.

He is either the chairman or the president of these giant companies: PLDT, Meralco, ABC/TV5, San Beda College (Board of Trustees), Smart Communications, Metro Pacific Investments Corp., Piltel, Metro Pacific Tollways Corp…. and many, Manny more.

I write about him because of his involvement in sports. Again, compared to a long-time heavyweight in sports like, for example, Danding Cojuangco of San Miguel Corporation, nobody has done more for our nation than Manny Pangilinan.

He rebuilt Ateneo. They’re the three-time UAAP champions. And, with Kiefer and Greg, they’re expected to slaughter all opposition this school year.

He patronized the San Beda Red Lions. It was at San Beda where he studied his elementary and high school. In return, he’s helped their basketball program. The result? The Red Lions are the 2010-11 champions of the National Collegiate Athletic Association. This means that, in both the UAAP and NCAA, the twin teams that MVP supported are the champions.

The Smart Gilas squad? Of course, based on their first name, “Smart,” it’s clear who sponsors our Philippine amateur team. MVP leads the Samahang Basketbol ng Pilipinas. In boxing, he also leads the Amateur Boxing Association of the Philippines (ABAP). His long-term goal: to produce the country’s first-ever Olympic gold medal. In taekwondo, MVP also bolsters their national program.

And, if all this success within our Philippine shores were not enough, Manny P. attempted a deal that’s never been accomplished by any Filipino, ever: The purchase of an NBA team. MVP lobbied to buy the Sacramento Kings. “I have to admit, the idea is very titillating,” he said. “It’s a great tribute to the country… Whether we do it or not, it’s a great idea for a Filipino group to own an NBA team.”

The plan was for MVP to pay as much as $260 million for a majority stake in the Kings. This whopping figure (about P10 billion in Php Pesos) would have been funded, according to reports, by “his personal capacity.” Unfortunately, it appears that the deal won’t push through. But, whether it’s next season or three years from now, expect MVP, now 65 years old, to pursue that NBA dream.

Well, here we are this weekend of July 23 and 24. On the topic of the NBA, if MVP cannot purchase a team, he might as well bring their best players to our shores. Lucky for Manila but unlucky for us taga-probinsya, MVP has invited MVPs Kobe Bryant and Derrick Rose. Also in Manila are Kevin Durant, Chris Paul, Derek Fisher and many more are here.

Last night, the NBA selection played the PBA All-Stars. Today, at 1 p.m., Kobe and Co. will face Chris Tiu and the Smart Gilas national squad. Yesterday’s game was shown live on (where else), the IBC 13 (TV5) network of Mr. Pangilinan, while today’s game will be shown delayed at 5:30 p.m.

Smart, aggressive, sports-obsessive… what a Most Valuable Pinoy.