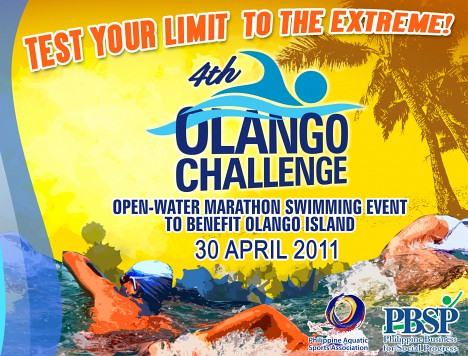 Jose Antonio Aboitiz was our guest speaker last Tuesday. He spoke about water. “We take for granted the importance of water in our lives,” said Tonio, during our Rotary Club of Cebu West meeting at the Radisson Blu. “But all of life depends on water.”

True. The Chairman for the Visayas of the PBSP (Philippine Business for Social Progress), Mr. Aboitiz explained the various initiatives of his organization. Tonio also discussed a sporting event. A marathon, he called it. Only, this time, unlike the many races on foot that bombard the streets of Cebu, this one uses the feet in a different way.

“It’s a swimming marathon!” said Tonio. A swimming marathon? What’s that? Well, if there’s a 42K “Marathon” on asphalted road, there’s also a long-distance event… for swimmers. Six kilometers. Yes. That’s six thousand meters of swimming. “That’s tough,” I told Tonio. “It is. But with practice, you can finish it,” he said. (Earlier that Tuesday, Tonio practiced in Tambuli Beach Club — the site of the start/finish — with a 4K swim.)

The 4th Olango Challenge, it’s named, and it’s an open-water event that’s organized not only for sports — but more importantly, to raise funds for Olango Island. “In the past three Olango Challenge events,” said Tonio, “we’ve raised over P1.7 million. We’ve built many classrooms for the children of Olango.”

Two nights ago when we met, Tonio counted 85 participants for the 2011 edition. “This is the biggest we’ve had,” he said. And, my guess is, this number will balloon to over 100 swimmers. The deadline for registration is on Saturday morning, the day of the race, this April 30. The race begins at 10 a.m. Late registrants can go to Tambuli by 8 a.m. and still join.

What’s fun about this event is it’s not all-serious. Yes, for the serious “dolphins” like Paula Abigail Vega, Erika Lukang, Nikita Dacera and Michael David, there is prize money (P10,000 to the champion). But, to the rest of the non-competitive swimmers, there is a 2K swim and a 6K relay event.

“The Philippines is an archipelago surrounded by so much water,” said Tonio. “We have so much coastline. But the sad part is… we Filipinos are non-swimmers. Not all of us can swim — despite our many beaches. Many children drown. This event hopes to spread the joy of swimming and the love of the sea.”

The 6K, though daunting, is doable. It is divided into three 2K loops (or rectangles fronting Tambuli’s coastline). For the Fun category, participants can wear flippers. One person challenged by Tonio to join is Harry Radaza. Lapu-Lapu City’s energetic councilor will run the Run4Japan event the night before, on April 29, and will swim the next morning for Olango. (Is this Harry’s practice to join the TRI-Lapu-Lapu triathlon this December?)

“Swim for Nature, Swim for the Future.” That’s the tagline for this Saturday. It makes sense. You swim with nature to help preserve water; the proceeds of the swim go to “the future,” the children of Olango.

Mark Joseph and Lex Reyes of the Philippine Aquatic Sports Association (PASA), the two honchos of the national organization, will be here to join. (Mark is the brother of Dondi, the president of the Cebu Business Club.) To those interested, call Riva Valles of PBSP at 2325283 or 2325270. You can also visit olangochallenge.wordpress.com.