It all began last October. Randy Villanueva called. Can the Davis Cup be held in Cebu? the Philippine Tennis Association (Philta) Vice-President asked. We had discussed this issue before. My usual reply to Randy: Sure… but where? Cebu does not have an international-standard venue. Worse, where do we get the bleachers? I thought of Baseline. I inspected Cebu Country Club. We studied Casino Español. Will the SRP be possible? I phoned Harry Radaza. The newly-elected councilor of Lapu-Lapu City, I had long known Harry from our high school days at CIS. He was my brother’s basketball teammate. I knew him to be a sports fanatic.

The Hoops Dome was the first option. Seating 7,000 and air-conditioned, it was brand-new. But Randy asked for a hot, open-air venue. We wanted to fry the opponents. Councilor Harry visited Efren Belarmino of Plantation Bay. They inspected the area. Phone calls ensued. Randy and his father, Lito Villanueva, the Philta president, in a few days’ notice, landed in Mactan. We sat for a meeting with Mayor Paz Radaza. Within weeks last October… the deal was finalized. A three-day visit by Cecil Mamiit–pampered by a massage spa at Plantation Bay–sealed the deal. 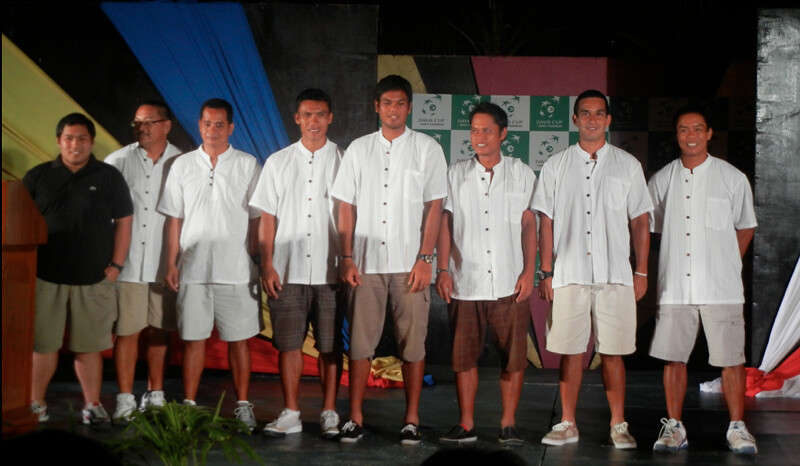 TODAY. Well, tomorrow. Because here we are, just moments away from a historic party. Plenty has been written. We know the Japanese won our last three Davis Cup meetings by a wipeout score of 5-0. But two of these encounters were in Japan and all on either fast indoor carpet or hard-court.

The last two times we played Japan on the clay-court? We won. Our latest victory was in 1995. The invaders were led by Shuzo Masuoka, world ranked no. 46. We beat Japan. Led by Joseph Lizardo, Robert Angelo and Camoy Palahang–we won the last two singles matches and beat them, 3-2. This was 16 years ago. (Ironically, Angelo and Palahang are both coaches in Japan today.) On clay, we’ve won. On clay come Sunday at Plantation Bay, we wish for the same.

TIPS. To those making the Davis Cup trek, here are some pointers:

Cheer. During the Fans Day last week at Baseline, over a hundred spectators watched. Sadly, they were quiet. Few clapped. Nobody cheered. We hope this scenario doesn’t happen tomorrow. We hope for the loudest, most boisterous atmosphere that will rattle the Japanese. Shout. Roar. Trumpet those vocal cords. Wear a PH shirt. Display our colors. The so-called “home-court advantage” isn’t a reality until we scream. Scream!

Bring a cap. We hope the sun will be exposed in its fully, yellow shining glory. Wear a cap. Wear Rudy Project sunglasses. Bring an umbrella (just in case it rains–though you can’t use it on-court). Use sunscreen. From 10 a.m. until 4 p.m., it will be hot.

Leave early. Tomorrow’s first match is 10 a.m. I suggest, if you reside in Cebu City, to leave at 8. Three days ago, it took me an hour just crossing the old Mactan Bridge. Also, there will be an opening ceremony to start tomorrow’s clash. It will start 9:30 a.m.

Official Draw today. At 10 a.m. at the Lapu-Lapu City Hall, it will be the official “bunot-bunot” on who will play who. This is the tennis version of boxing’s “Official Weigh-In.” It’s when the players from both camps stand side by side. Though they’ve played each other before, there will be jitters.

TV coverage. For those who cannot watch the games live, here’s good news: We were able to ink a deal with TV5 (owned by Manny Pangilinan) for their new sports-and-news channel (Channel 29 or 41) to air the games.