Mention the words “Larrazabal” and “Running” in the same sentence and you get a unanimous reply: Y-O-N-G. That’s Dr. Potenciano Larrazabal III, the most prominent marathoner in Cebu.

Mention the words “Larrazabal” and “Biking” in the same line and, this time, you get a different answer but with nearly the same letters interchanged: G-O-Y-O. That’s Atty. Gregorio Larrazabal. Yong and Goyo are cousins. One is an eye doctor; the other, a lawyer with an eye for public service. In sports, no two people are more passionate. 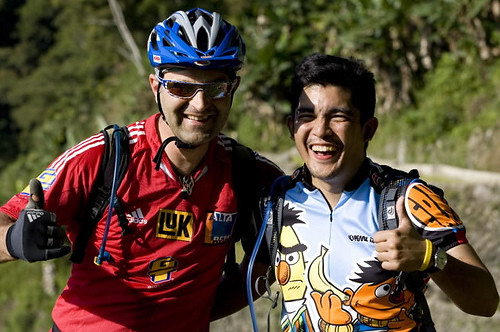 Atty. Goyo Larrazabal, of course, we saw on TV. During the 2010 elections, he was the youthful face of the Comelec. He was the “rookie” tasked to spearhead a first in PHL politics.

After the confirmation, the En Banc designated him as the Steering Committee head. “It was a challenge as I was — literally and figuratively — the youngest Commissioner given the task of overseeing the conduct of the automated elections,” said the 39-year-old Goyo.

“It was an opportunity and challenge that doesn’t come that often (a huge understatement). There were so many challenges that had to be addressed. We worked together with a number of dedicated and qualified individuals who shared a common goal: to change the way people view elections and how elections are conducted in the Phils.”

While the Filipino voting populace was doubtful, even suspicious, of computerization, the Comelec delivered on its promise.

“People, I guess, now fully appreciate the pressure during the weeks leading up to the elections,” he said. “But there was no option other than to make sure we had elections on May 10. And I’m forever grateful to countless individuals who stayed the course and focused on the goal, despite the deluge of disinformation some were spreading.”

Today, his first name “Commissioner” has reverted back to “Attorney.”

“I retired on Feb. 2,” said Goyo. “Now, I’ve been busy with the Terry Larrazabal Bike Festival (TLBF) and Pinoy Bikes/Bike Town Cyclery. I’m also planning for voter education/empowerment which we hope to launch this year with the DepEd and PPCRV.”

A mountain-biker for the past 22 years, Goyo looks like the 5-time Tour de France winner Miguel Indurain. I asked if his myriad of experiences–including founding the TLBF (which runs next week, from March 31 to April 3)–helped him handle the unimaginable pressure.

“I consider myself blessed because of my unique perspectives,” he said. “I belonged to a political family, thus giving me the view candidates have of elections. I used to practice election law, thus providing me with a unique insight. I used to teach (St. Peter’s College and Cebu Doctor’s Univ.), work in a bank, work in the Office of the President of the Philippines, and had the perspective of an event organizer (the TLBF).

“I always say that elections is an event, which needs to be managed properly AND I was a COMELEC field official who was assigned all over… from Region III, Region V, Region VIII and the ARMM. Add to this the support of my family, which is important for anyone who wants to be successful.

“And when I got appointed, there were some people who wondered why, as I was young (the youngest Commissioner on record) and they didn’t really know me. Some speculated I was there to make sure the elections would not push thru (“Why was this young guy appointed and made to head the automation project?).

“But when we did our work, even on Sundays, we knew that failure was never an option. Knowing that you’re doing it for your country, family, wife and specially my son, that was the driving force behind the effort.”