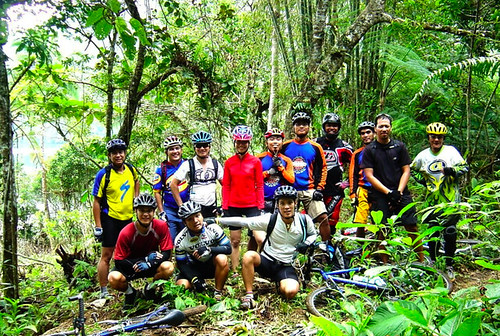 Jaime Gallego and I are members of the Brotherhood of Christian Businessmen and Professionals (BCBP). Our motto reads: Be Honest. So I’ll be honest. I’ll make a confession. I had an affair. And so did Jaime.

Three weekends ago in Ormoc City, miles of sea away from our wives’ radar screens, we each smuggled in “roommates.” We checked in at Hotel Don Felipe. Held their hands. Opened the hotel room door for them. Inside, our eyes sat frozen ogling at two attractive, sexy, ravishing frames. We massaged their curves. Gave each a long wet bath. To cut the long drama short, like most affairs, word leaked out and our wives found out. We had to spill out the truth. And be honest. How that weekend, we “roomed” our bikes. 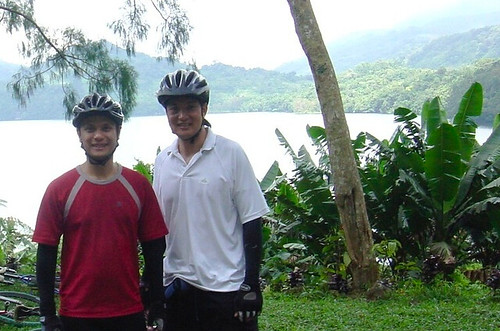 Preparing for Ormoc, Jaime and I looked every bit like pros. A week before, Jonel Borromeo sent Lance Armstrong’s training manual. We digested it word for word. Aboard the Supercat, Jaime pulled out a lunch bag of Sbarro lasagna that had all the passengers’ noses enlarged. We carbo-loaded. On race day, we arose at the sight of the sun climbing out of its sleep, took breakfast at six when all else were snoring, and loaded our Gatorades.

To be honest, we’re neophytes: Jaime first climbed the saddle last January; me, just two months ago—and this was our first MTB sortie. Still, we vowed to enjoy it.

By 9 a.m., we stood at the Cross-Country (XC) race starting block as the speakers blared, “Three, two, one… GO!” Hundreds of hearts jumped off rainbow-colored jerseys as legs banged the pedals up-down, up-down like car cylinders roaring through the highway. Under the sweltering heat of a cloudless blue sky, we climbed farmland, descended at 50 kph, bounced over boulders, got sprayed water by street kids to cool our overheating engines. 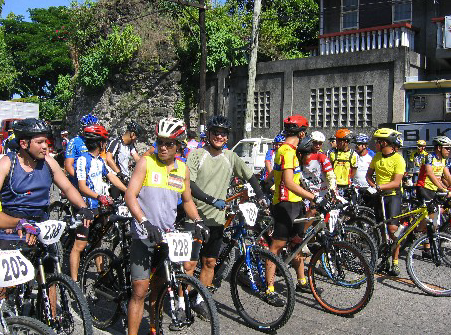 Thirty two kms. later, never mind the muscles shouting “CRAMPS!,” we crossed the finish line with fists pumped on air and screamed, Yes we did it!

“We started the TLBF in 2002. After my dad passed away in December 2000, my family wanted to do something so people won’t forget him,” added Goyo, a mountain-biker since ‘89 who looks like the five-time Tour de France champ Miguel Indurain. 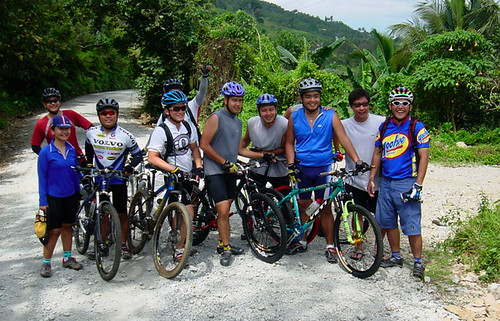 With 240 participants and prizes topping P300,000, the TLBF is one of RP’s biggest events on thin wheels.

“Bikers come from as far as Baguio up north and General Santos down south,” said Goyo, an RP representative to the International Mountain Bicycling Association (IMBA). “We’re the only event that has combined MTB, road bike and BMX competitions.”

More than just racing, Goyo added, “We have other activities which make the event a real festival.” True enough, there were raffles, a motocross event, a Pops Fernandez gig, and a fun ride around picturesque Lake Danao. 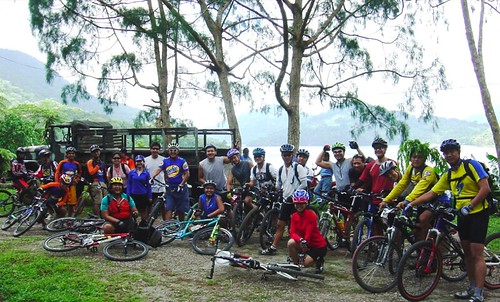 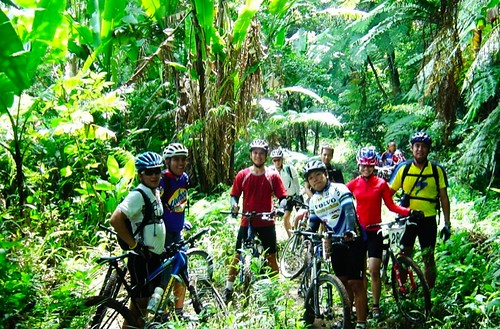 FROM CEBU. Dr. JV Araneta, after seven years of emailing, I finally met in person that weekend. A dentist by profession but cyclist by obsession, JV’s six-foot-tall frame loomed tallest not only as one of the road bike speedsters, but also as cycling expert at The Freeman.

Joey “Sangkoy” Ontanillas donned an all-USPS suit just like the reigning Le Tour champ and was called over the PA system, “Lance Sangkoy.” I take my helmet off to Mike Flores. Bike Hub’s co-owner and a highly-respected architect, Mike notched a Top 10 finish. Just when I thought my two-hour XC time was respectable, Mike skyrocketed at one hour 39 minutes. 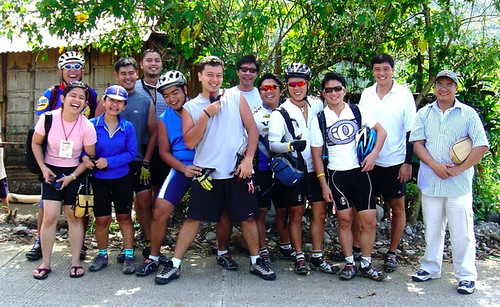 The soothing voice of Y101’s “June” Rabin (above photo, left most in pink) reported updates beside Iko Gomos, an avid biker who surveyed the field this year ready to gun for that podium finish come April. Adan Muaña, the famous bike doctor from Lahug, sat as race director. Michelle Marturillas had a big smile, Bike Hub’s Tata Navarra, Celso Solis and Ben Fabroa were all medal-placers. If there existed such an award, Caecent No-ot of The Freeman would win Sexiest with her backless yellow jersey.

Two couples stood out: Joel and Astrid Concepcion and Butch and Angela Canares. Joel led the peloton (main group) in his yellow “Once” jersey during the Criterium while Astrid, toting their baby girl after, joined the XC. Butch, last year’s overall runner-up, opted to give others a chance this year by not joining, while Angela won the back-breaking single-speed race.

By nightfall, courtesy of Allan Larot, wife Tootsie and brother-in-law Roy Zapata, Jaime and I gorged on a sumptuous dinner buffet.

In all, thanks to Goyo and the Larrazabals, the TLBF was biking heaven. That’s why I keep reminding my wife: I can’t wait to start another affair in Ormoc.