Is it? Yes, I believe so. Had he lost in Congress last May 10 like he did in his first round of politics against the “heavyweight” Darlene Antonino-Custodio, he’d fight more fights. Had he not annihilated everybody in sight and climbed the Mt. Everest of Boxing—and be declared the sport’s No.1—he’d fight more. And is he not turning 32 years old this Dec. 17?

Yes he is. Here’s one more yes: Manny is retiring on Nov. 14. What more is there for him to accomplish? He’s now a Congressman—and a Senator come 2013. He’ll win his eighth weight division—a feat so outlandish that I don’t think any human being has done it before. He has four children—possibly more—named Jimuel, Michael, Princess and Queen Elizabeth. He is King; the most famous Pinoy in this planet of 6.7 billion inhabitants—more popular than P-Noy, GMA, Lea S., and, yes, Charice. In world rankings, according to the Corruption Perceptions Index, we’re ranked 134th out of 178 countries—a black-eye of an embarrassment—yet Pacman soars as our lone Philippine Eagle. He’s today’s Jose Rizal. 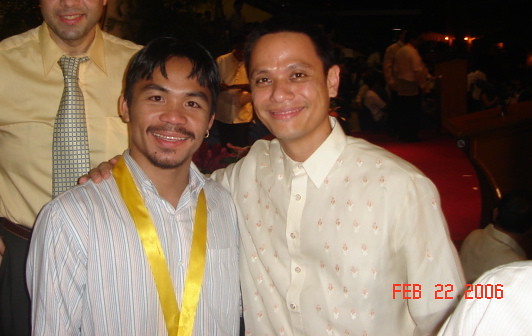 Manny has billions. No exaggeration there. Granted that, for each fight, he grosses $15,000,000—even if his net pay check is half or $7.5 million—that’s still P350,000,000. For one 12-round fight that he often reduces to seven rounds and 21 minutes of punching. Manny has all the money you and I will ever need—for a dozen lifetimes.

Why fight more? What’s the incentive? None. Why do you think Manny’s training for this fight is his worst? That’s because his mind, his heart, his lungs, and even his feet are elsewhere. “He has a foot problem,” said Freddie Roach in an Associated Press story. “And that’s because he wears dress shoes too much.” That’s laughable. But true. And dangerous for our man. That’s what politics does. It corrupts even the feet.

“I know his mind is off the fight,” added Roach. “I know his mind is somewhere else, and that’s because of politics. If there are no more challenges out there after this fight, this could be it… He loves his other job, and he might be done with this one.” This “other job,” of course, is basketball. The dribbling called politics.

If, indeed, come two Sundays from now, we’ll see The End of The Manny Pacquiao True Story Movie, it will be sad. We’d have lost our inspiration. We’d have more traffic on fight-day mornings. (The good news: the 10:45 a.m. Redemptorist Church mass will once again be filled with churchgoers.)

Emmanuel Dapidran Pacquiao’s life story is better than any movie Steven Spielberg or Marilou Diaz-Abaya can concoct. It’s more unbelievable than James Bond’s—with more savory “girls escapades.” His dropping out of high school and leaving home at the age of 14 because Nanay Dionisia, who had five other children, could not support Manny. His rough beginnings as a construction worker and kargador. His start as a professional boxer at the age of 16 (height: 4-foot-11) and weighing only 106 pounds. His knockout losses against Rustico Torrecampo in 1996 and Medgoen Singrurat in 1999. His defining moment when he stunned Marco Antonio Barrera. His Phil Jackson-like coach in Freddie Roach. His winning his last 12 fights up until today—against sure-Hall of Famers like Morales, De La Hoya, Marquez…

Manny has done more in his 31 years of breathing air than we can ever achieve in 31 lifetimes. Will he win come Nov. 13? On his attempt for a 13th straight victory? Won’t this “13” be “Unlucky 13” for PacMan? In his last stand, one will be the last man standing. He’s Filipino.