The word is Tenacity. It means to be persevering and dogged. The word is Determined. It’s defined as being “forceful, single-minded.” The word is Competitive. It translates to one’s being “merciless.. aggressive.. brutal.” All these words are synonyms to one name: Rafael Nadal. 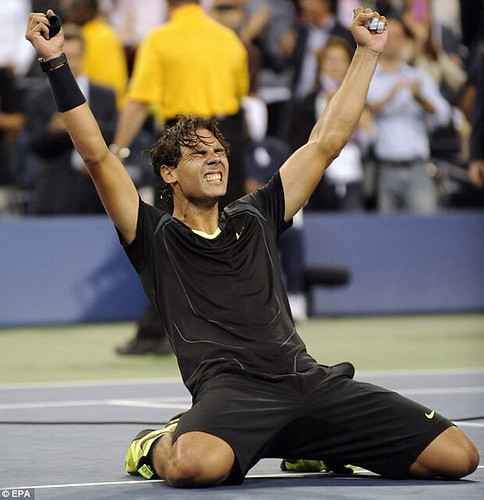 Has there been an athlete as forceful? And fist-pumping, Vamos-shouting, I’m-willing-to-die-on-court-to-win persistent? Yes, Michael Jordan was intense. So was Mr. Armstrong during his Tour de Lance. KB24 is another. And, we can point to our own: Manny P. They are history’s most strong-willed of sportsmen. Add two more letters to the shortlist: R.N.

You want to know Rafa’s secret? Actually, there is no secret. We’ve seen it on our TV screens ever since he won the 2005 French Open (on his first try) as a 19-year-old. It’s called attitude. Mental strength.

“What’s my best thing?” he asked himself. “I think the mentality, attitude on court I think always was good for me,” he said. “I am positive on court, and I fight all the time. But not the only thing. Positive attitude is not only fight on court. I think I was able to listen all the time to the coach and to have adjustments and to be ready to change things to be better and to improve.”

That’s it. For while nobody in the ATP Tour possesses a more Herculean build, it’s more than biceps and triceps that enable Rafa to win: it’s brain power. Nobody, simply put, wants it more.

The U.S. Open final against Novak Djokovic? Well, the Serbian was handed plenty of favors. After a draining five-set upset of Roger Federer, Novak was scheduled to play Rafa just 20 hours later. It rained. He was given an extra 24 hours. Plus, during the final itself and while showing early signs of fatigue, it rained in the second set. Novak rested. It didn’t matter. Well-rested or not, there was no stopping the 2008 Olympic gold medalist from claiming his first gold in New York. 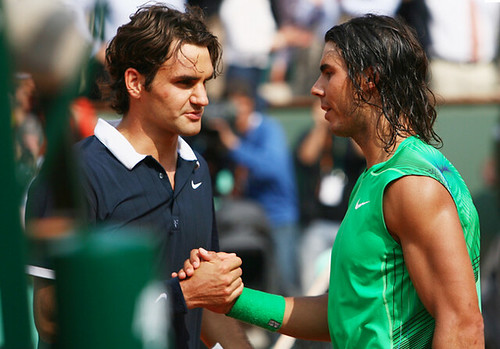 Take the luncheon I joined two months ago. British Consul Moya Jackson, although nearer in hometown to Andy Murray, adores Roger Federer. Same with Michelle So. And Chinggay Utzurrum. Regardless of whatever Rafa accomplishes—even if he wins Major No. 155—their hearts are forever transfixed on Roger.

Frank Malilong, one of this island’s best debaters and a left-hander with wicked topspin shots, is, on the other camp, a Nadal devotee.

They argued. Teased one another. Everybody left Casino Español with stomach pains—not from sumptuous-food overload—but from laughing. Nobody admitted their R was weaker.

It’s the same elsewhere. Bobby Lozada, Ernie Delco and Fabby Borromeo are for Rafa; so are my Jasmin and Jana. The Polotans—Jourdan and Jingle—are for Roger; so are Emma Siao and “R” doctors Ronnie Medalle and Ronald Eullaran. This debate is two-sided.

My personal analysis? Yes, Rafa will eclipse Roger. Only 24 while Roger is 29, that five-year gap means 20 Grand Slam opportunities. Can RN win at least seven in the next 60 months? (The French Open alone he’ll win 12!)

But, you ask, won’t Roger also win more and add to his 16? Maybe; maybe not. Sure, Roger is still a threat. Had he converted on those match points in the semis, he’d have faced (yet, I believe, still lost to) Nadal. But here’s Roger’s problem: When facing the Spanish matador, his muscles melt like Swiss cheese. Their record is a lopsided 14-7 (in Nadal’s favor) and—here’s the more telling score—RF has lost six of their last seven meetings and has not beaten RN in a major since ‘007.

Still, it’s a long way to go. But with Frank Malilong as his lawyer, I wouldn’t bet against Rafa.