Last Sunday, I participated in a road-running race. It wasn’t the usual every-Sunday event. When you’re able to gather a congregation of 23,000 pairs of feet, all stumbling and trampling on the same Osmeña Boulevard, that’s unusual—and hard-to-believe numbers. Well, despite the chaos of too many shoes, guess what: In my 46 months of running, it was one of the best-organized races I’ve joined. 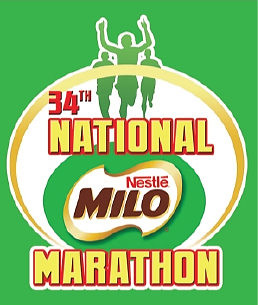 Congratulations to Nestle, to Ricky Ballesteros, and to the hundreds of technical and support staff—including Joel Juarez—who made sure to uphold the exalted name of “Milo” in sports.

What made the race spectacular? The giant screen at the starting line that projected the route, videos and photos—that was one. The presence of Nestle CEO John Miller—that was another. Mr. Miller not only rendered an inspiring speech (announcing their advocacy of donating running shoes to elementary students), it was also because the CEO joined us in the 21K race—finishing in a speedy time of 2:04. Three sexy ladies wearing skimpy tops who climbed the stage for minutes of warm-up, dancing to “Waka-Waka”—that was another pre-race attraction. Then… Bang! We were off! Large speakers blasted music along several points of the route. One side of Osmeña Blvd. was closed. 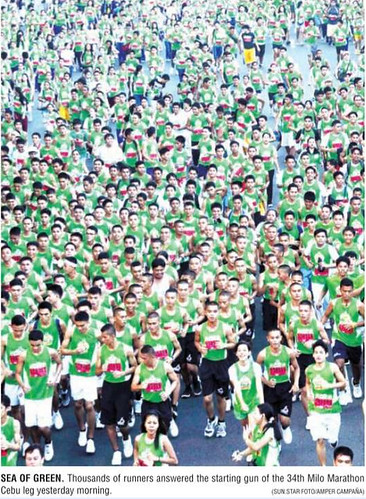 Water stations in our Half-Marathon route were abundant—in my estimate, less than a kilometer apart from each station. The marshals handing water and Gatorade wore not ordinary attire but green Milo shirts. Along the South Road Properties (SRP), bananas (perfectly-sliced and perfectly-ripe) were in excess.

And then, the UNGO group. Along the route, the Ungo Runners constructed three outposts (at the CIT U-turn, near Metro Gaisano and inside SRP) with plenty of Gatorade and supplies. Joy Polloso, Ayala Center Cebu’s top honcho, personally handed out drinks. Bikik Besavilla positioned herself near Colon St. to help. (Ungo has become a strong force for good in running. Well done, Ungo Runners!)

Finally… the Finish Area was superb. Located inside the Cebu City Sports Center, runners entered the side gate and sprinted a few meters on the track oval before crossing the finish. Thousands of students screamed and enjoyed the presentations—all making a festive ending.

Then, after you cross that finish line, you’re handed all you need: a green Milo-labeled bag with water, banana, etc. Plus—and this is a good tip for all organizers—you’re donned the finisher’s medal seconds after crossing that line. Perfect.

All-smiles at the finish were plenty: Leonardo “Jun” Angeles was super fast at 1:44 in the 21K. Benedict “Bende” Benedicto (who timed an impressive 1:56) and his wife, Mary Ann “Mat,” who finished eighth-place with a 1:59 time. Bende and Mat are now one of the fastest couple-runners in Cebu—this despite Mat only joining the running scene last March. Congratulations also to doctors Charles and Loy Tan and to Mae Ugalino for finishing their first half-marathons.

Our lone criticism of Milo? Except for the elite runners that included Noy Jopson (who finished the 21K in a blistering 1:27 and thus exited the SRP fast), we got burned.

Running inside the shade-less SRP for 10 kilometers with no reprieve from the fiery sun was pure suffering. Several quit. Plenty walked. It was, simply put, agonizing and painful. (Next year, instead of the actual 5:37 a.m. start, we recommend a 5 a.m. start and to tackle the SRP route first.) Still, Milo was the best Philippine race I’ve joined (the Singapore Marathon I’d still consider tops).

Backed by Nestle and with 34 years of experience in organizing races, this was a very well-run Run.