Jovi Neri and Bayani Garcia are first cousins. They both play the same game as Phil Mickelson. After last weekend, add one more similarity: they’re both champions of the Cebu Country Club Men’s Club Championships.

Atty. Jovi Neri won in 2002. Bayani Garcia? He was the hero last Saturday, beating four-time winner Eric Deen in one of the most impressive performances on the CCC golf course. Thanks to his cousin Jovi, the detailed account of last week’s contests are all found in the website www.cccjungolf.multiply.com. Here are excerpts of Jovi’s article, “Men’s Club Championship: Bayani The Big Winner!” 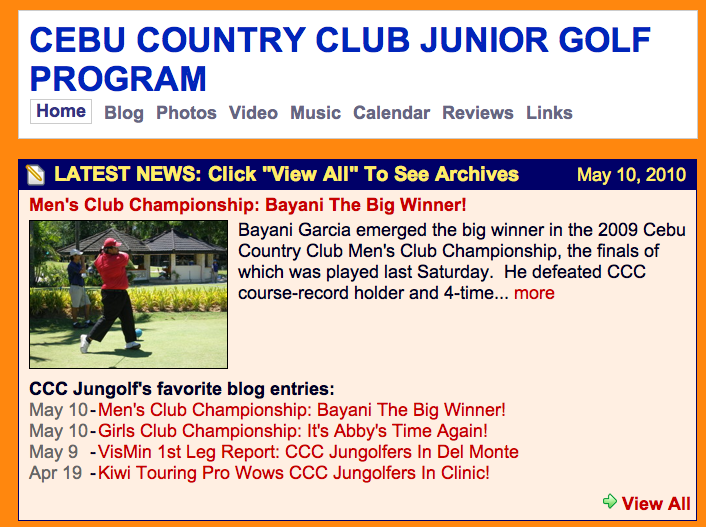 May 15 Finals: Bayani Steamrolls Past Eric. “The two finalists had a shaky start. Bayani drove into the water on the left in the first hole to get a bogey which Eric matched after three-putting. For Bayani though, he would play the next 17 holes bogey free with a few birdies sprinkled in to give him a 4-up cushion over Eric going to the lunch break. Bayani was 4 or 5 under with his own ball in the first 18 holes of play.

“In the second 18 holes, Bayani bogeyed the 2nd hole to drop to just 3-up. Although Eric bogeyed the 3rd hole, he bounced back with a birdie on the 4th to trim the lead to a very manageable 3-down deficit with a possible 15 holes to play.

“A wayward tee shot to the par-3 5th by Eric led to a bogey, and they matched pars on the 6th and birdies on the 7th. Bayani stood 4-up, exactly where he began his second 18 holes. Bayani got up and down for par on the 8th with a clutch 8-footer while Eric missed from 5-feet dimming his hopes as he went 5-down. A birdie by Bayani on the 9th put him at 6-up.

“Both players matched pars on the 10th. Bayani found trouble on the 11th and had to play out on his third shot. Lying two on the middle of the fairway for his approach to the green, Eric dumped it into the creek and an imminent 6-up lead with 6-holes to go was coming. Eric wanted none of that and conceded to Bayani on the fairway, even before the latter could play his 4th shot. Bayani is now the new club champion.

The Dominating Match Play Performance. “Unhappy with his qualifying performance, Bayani took a little bit of a gamble by recalibrating his clubs on the eve of his first round match against Marko Sarmiento. It payed dividends in the end. Bayani put one of the most dominating match play performances ever.

“His approximate scores would have been: even par against Marko, one-under in the quarterfinals against Joseph Stevens, three-under in the semis against Lj Go, and a whopping seven-under against Eric Deen in the finals. In all three matches, there was also never a point where Bayani was down.  He was either tied or leading all throughout.

The Long and Winding Mission Accomplished. “Before this year, Bayani’s last time in the finals was in 2002 (or the 2001 edition) where he lost on the 28th hole to his cousin (and current jungolf chairman) Jovi Neri when he was only sixteen years old. It was also that same year where he lost in the Junior Club Championship finals to Keenan Ugarte.

“The year before, Bayani played in Class B and also lost in the finals. And during his last year of junior golf eligibility, he lost in the semifinals where his good friend Charles ‘Chuckie’ Hong went on to win the first of three junior championships. Chuckie went on to win two men’s club championships in three consecutive finals appearances while Bayani remained at one. In one of those years, it was even Chuckie who took Bayani out in the semifinals. Surely, Bayani must have been wondering when his time would come.

“Eight years between finals appearances was definitely a long wait.  It was so long that the last time around, Bayani just finished high school. Now, Bayani has gone through two colleges and is already working. But the wait was coupled with patience and hard work which ensured this victory.

“Bayani posted in one of the networking sites that it was ‘Mission Accomplished’ and what a long mission it indeed was.”