The most popular sport in the Philippines today, Cebu included, is not basketball or Bata Reyes’ game or football or Manny Pacquiao’s sport, it’s the one that you and I and tens of thousands of others perform at 6 a.m. in Abellana or late evenings at the Asiatown I.T. Park, it’s the one sport that has convinced many a Saturday-night-partygoer to arise at dawn on Sunday to wear shorts, to tie those shoelaces and to run. 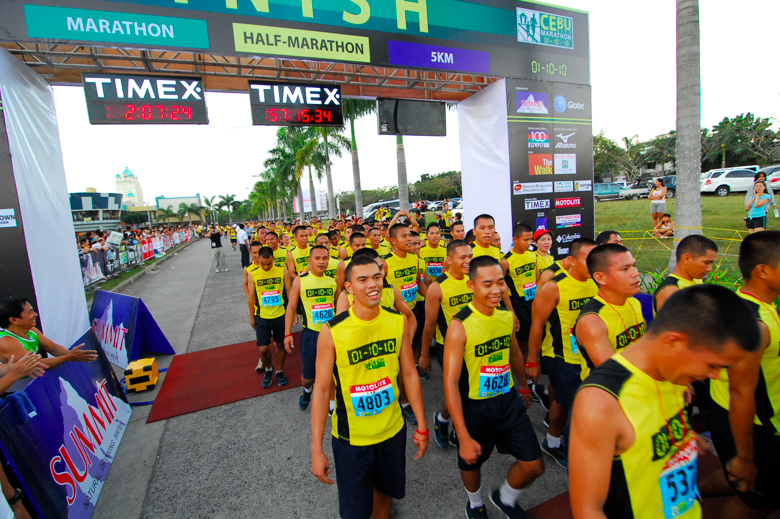 Has there been a drug that’s more addictive than running? A sweat-inducing activity that’s invigorated 61-year-olds and hardened 16-year-olds? A sport that has coerced thousands to enlist last Sunday, this Sunday, and next Sunday to join 5Ks, 10Ks and 3Ks? A routine that’s habit-forming, strolling inside RUNNR in Ayala or Mizuno and Nike Stadium in SM each time we step inside the mall?

I’ve seen badminton flourish. I’ve observed golfers enlarge in numbers. I’ve witnessed footballers multiply among the elementary students. But, compared to today, they’re nowhere as near as the multitude of runners and the frequency of events held (often twice) on Sunday mornings.

What’s different with running is this: It’s free. The air is free, the cement road is free, the friends you run with (unless you make bangka after each run) are free for you to enjoy. This is an inexpensive sport.

Running is also this: it’s social. It’s the Facebook of sports. When you run with your barkada, they run beside you. The more you group together, the more you run; the more you run, the more friends you meet, the bigger the social network.

Running is the best way to lose weight. This is a fact. No other sport burns more calories than throwing your weight forward, one leg in front of the other at a time.

Best of all, running creates… Momentum. Like everybody else, when you start, you gasp for air, your muscles ache, your first-ever 3K run is painful. This is normal. But, if you keep on pushing, you’ll soon realize that 30 minutes is a cinch. Then, 40 minutes is effortless. You progress. A 5K run? Ah, you say, kaya ra! After… you do the distance that you never thought possible when you started: 25 loops around the oval of the Cebu City Sports Center. That’s 10 kilometers. For beginners, I can never run that far, is the thought. But, as you progress — as one gains Momentum — the 10K test is passed.

Which brings me to the ultimate distance: 26.2 miles. It’s called the Marathon. And, by this term “marathon,” I don’t mean, like others say it, “I’ll run a 5K marathon!” That’s incorrect. The marathon has one unique number: 42.195. That’s in kilometers. And every runner, even if you’re just a 3K Fun Runner today, should aim — at least once in your life — to complete a marathon.

My suggestion? Being biased because I’m with the Cebu Executive Runners Club (CERC), the organizers of this mega-event, I propose you run our own race. Before flying to HK or Singapore, why not, in the comforts of your own asphalted road, run in Cebu. And so, I’m pleased to announce the date of the Cebu Marathon: it’s on January 9, 2011. (We wanted Jan. 11, 2011 to make it “1-11-11” but that’s a Tuesday!)

The 2011 Cebu Marathon is seven months away. Why announce it now? Because it’s not your ordinary 10K. “To describe the agony of a marathon to someone who’s never run it,” said the Canadian runner Jerome Drayton, “is like trying to explain color to someone who was born blind.”

That’s true. I’ve ran three marathons and finished only two; in my first, in Hong Kong, I succumbed to cramps and knee injuries. And so, to attempt a 42K run — the distance from Capitol to Carcar — one must prepare. And seven months preparation time, even for one who’s a 10K finisher today, is sufficient. How to train? I’ll save that for a future column. But, for now, the challenge is before you: See you in January.