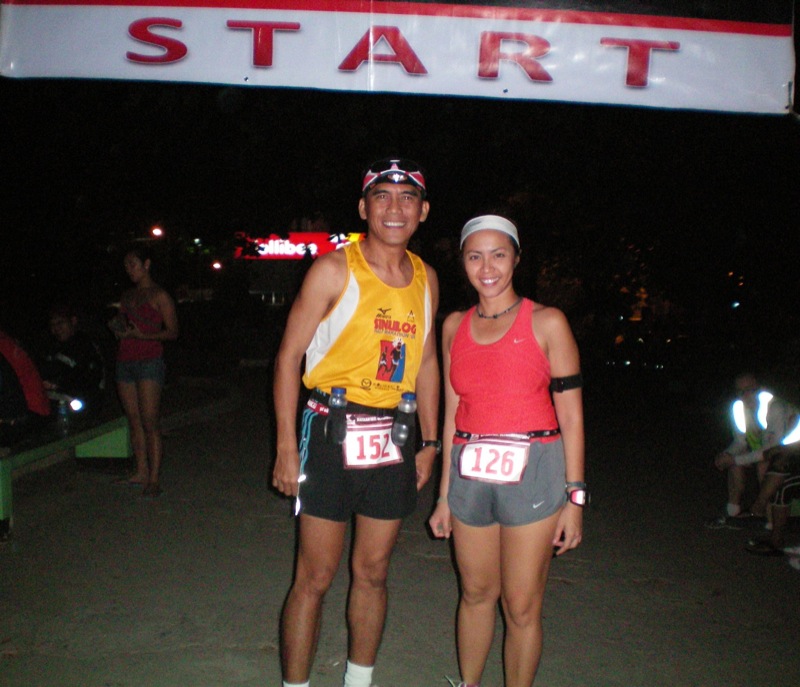 If you think running 42,195 meters to complete a marathon is ridiculous, meet Bro. Carlo Bacalla. He’s no ordinary marathoner. He’s an ultra-marathoner. And, last March 7, he joined a race that’s the farthest in distance: the Bataan Death March (BDM).     How far? One hundred two kilometers.

Crazy? Yes. Because Bro. Carlo is crazy for sports. In our recent back-and-forth email interview, he admitted, “Someone said ‘It takes an idiot to run a marathon but it takes a special kind of idiot to run an ultra-marathon!’”

Training director of the Don Bosco Training Center for out-of-school-youth in Pasil (among his myriad of jobs)–that’s Bro. Carlo’s profession. His passion: running.

At the BDM 102K race that spanned from Mariveles, Bataan to San Fernando, Pampanga, a total of 142 registered (including Haide Acuña). In the end, only 104 finished. Bro. Carlo? Did he make it? No. I mean, No, he didn’t just make the cut… he finished 17th place! An outstanding achievement (clocking 14 hours and 38 minutes) for one who’s 47 years old. He has completed nine marathons–plus the Ironman race last August in Camarines Sur. Why run 102 kms.? Only the most hard-core of men who can absorb pain, even relish it, attempt the distance. And that’s Brother.
Here’s my full-length interview with Bro. Carlo…

1. When did you start running?

When we were kids I remember joining “poste-poste” races in our neighborhood. We would bet on empty cigarette cases that we would fold like peso bills. It was our past time then. My first official run was in 1986 in the 10 k freedom run at EDSA. I run my first full marathon when I was a student of theology in Paranaque in 1988. I recall that when I took permission from my rector, his answer was: “Ok you run as long as you don’t sleep in class”.

2. How many marathons have you done? What’s your best time?

I did my first full marathon in 1988 in the “Pilipinas Marathon” the second was the “PAL Marathon”. I did 3 runs in the former and 4 in the latter. I had to stop running when I volunteered to work as a missionary in Africa and worked for 13 years there. The QCIM was my 8th marathon after 17 years of absence. The Condura Run last Feb. 7 was my 9th. My best time was 3:45 in the Pilipinas Marathon.

I had no idea about the BDM 102 until January 15 of this year when I was browsing for ultramarathons in the internet. I was interested in the “Famous Comrades” of South Africa but was informed that registration was long closed. Then I came across TNF and BDM. I didn’t like the former because it was a trail run but the latter was closed too since Jan. 6. I wrote a comment to the organizers of BDM and begged that I be allowed to join. On Jan. 18 I got the approval from bald runner and so the serious training of less than 2 months began. The race covers a distance of 102 km from Mariveles, Bataan to San Fernando, Pampanga.

Reason for running? 1. I like challenges and BDM provided one. 2. To pay tribute to the heroes of Bataan, 3. To test my mental and physical limits. 4. To have more photos for Faacebook, hahaha.

After reading so much about ultra running, I drafted my own 7-week training program. With barely two months to prepare, I did what I had to do: run, run, run, climb, climb, climb, drink, drink, drink, pee, pee, pee. The Condura Run was my test to determine my fitness for the BDM. I set a goal of 12 hours. I climbed to tops trice, run from Pasil to Cordova and back twice, and did night and mid-day runs 5 times. I did my longest run of 80 km 2 Sundays before the race. After doing my last 2 short runs during the race week, I felt confident I can hit my target.

The route was completely unknown to me. Fortunately, a priest-colleague from Don Bosco Pampanga volunteered to drive me and we did an ocular check before race day. It helped me gain more confidence. I had everything ready by noon of March 6.  After briefing my support crew, I took dinner and droved to Mariveles, Bataan and met Haide for our planned photo session at km 00.

The atmosphere was festive despite the poorly lighted starting area. After taking photos, I had a chat with Haide while waiting for the race briefing. We encouraged each other and agreed to meet at the finish line. The starting gun was fired at 11:30 pm. I made the sign of the cross and took the road.

My plan was to divide the distance to 3 the first 42 km in 5 hours, same with the second 42 km, and the final 18 km in 2 hours. But I had to make adjustments in the first part due to the many climbs. Part of the strategy was to run-walk in some stiff climbs. Practically, the second half of the route was flat but due to the heat which reached 41 deg Celsius at noon time, I had to slow down. I instructed my support crew to leap frog every 2 km in the first 6 hours and at every 1.5 km thereafter. I took my drinks and replenishments in those stops.

At 10 am due to extreme heat, we had to change strategy and had my support vehicle stop at every 1 km until km 102. There were times when I was tempted to race with the other runners, to go fast at the early part of the race, or to run the uphills. Those were moments of tests and learnings. 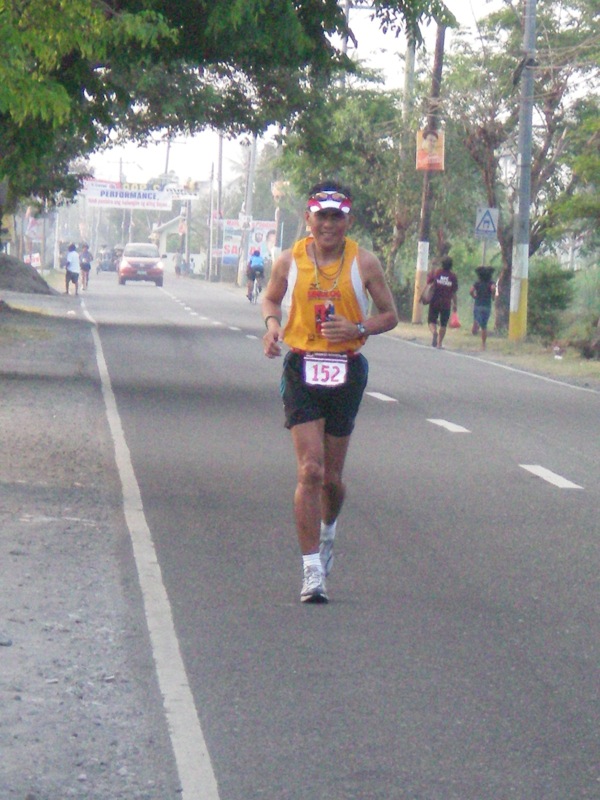 Right from the start I was confident I will finish the run but I didn’t expect to be in the 17th place. At the end I would attribute ninety percent of the success to my support crew. It would have been impossible to do it without a good support team to provide water and replenishments. We had our support vehicle stuffed with 12 bottles of Gatorade and mineral water, biscuits, power gels, bananas, pandesal, sliced bread, first aid and 2 extra gallons of water.

If I counted right, I think I urinated 15 times throughout the entire distance, an indication that I hydrated myself well. I did something unusual at every kilometer post: I prayed to the holy souls of those who died during the death march to help me reach km 102. I crossed the finish line pouring the last drop of water on my head and flashing the v-sign. It was fun with countless lessons. 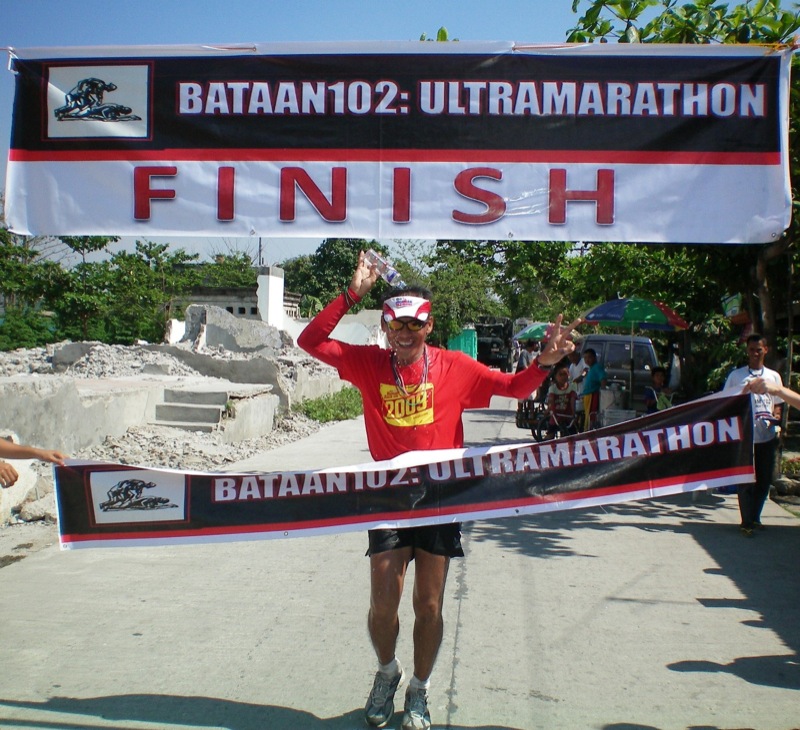 Definitely, I will join the BDM next year. According to the organizers the distance will be extended till Capas, Tarlac where the soldiers ended the death march. That’s a 140 km distance.

6. What are your future goals?

If my schedule permits me, I will try to join in all the local runs in Cebu. But there are invitations for me to play in the 40 and above soccer tournament in Bacolod in May. I will try going back to soccer this summer. This is just for a change. By June I will start preparing for my 2nd half-ironman in Camsur this August 22. Swimming will be my focus this time. I hope to improve my personal time and finish it in 6 hours. In November I will start training for the BDM 2011. Don’t get me wrong ha. Sports is just a past time, it’s not a career. My duties as a religious brother always take priority.

7. What’s your work with Don Bosco?

Quite a lot. I am the training director of Don Bosco Training Center for out-of-school-youth in Pasil. At the same time I am in-charge of the alumni of the same center. At the provincial level (salesians of don Bosco in Visayas and Mindanao) I head the commission on missions and work as the coordinator of the salesian lay volunteer organization.

8. Did you run in Africa when you were assigned there?

I was 13 years in Africa but I didn’t run much because the place where I worked was not running-friendly. I had an overdose of soccer in Nigeria. However, I did organize fun runs in the two centers where I was assigned. In 2005, I run a half-marathon in Lagos.

Age is a state of the mind! My chronological age is 47 (28 years as a religious brother) but I put 25 as my age in my Facebook, hahaha. 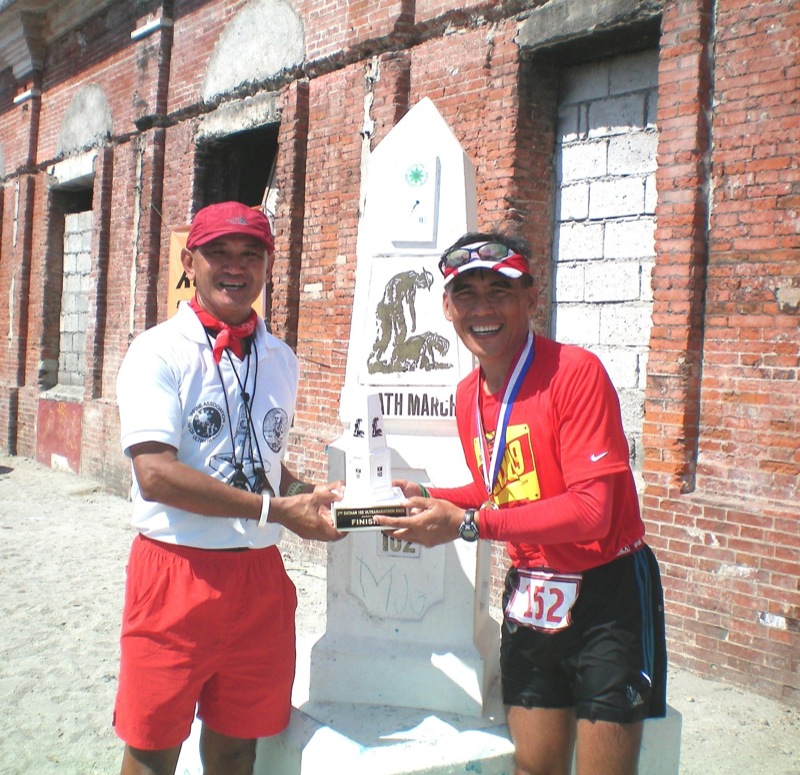 With Gen. Jovie Narcise (Bald Runner), organizer of the BDM 102 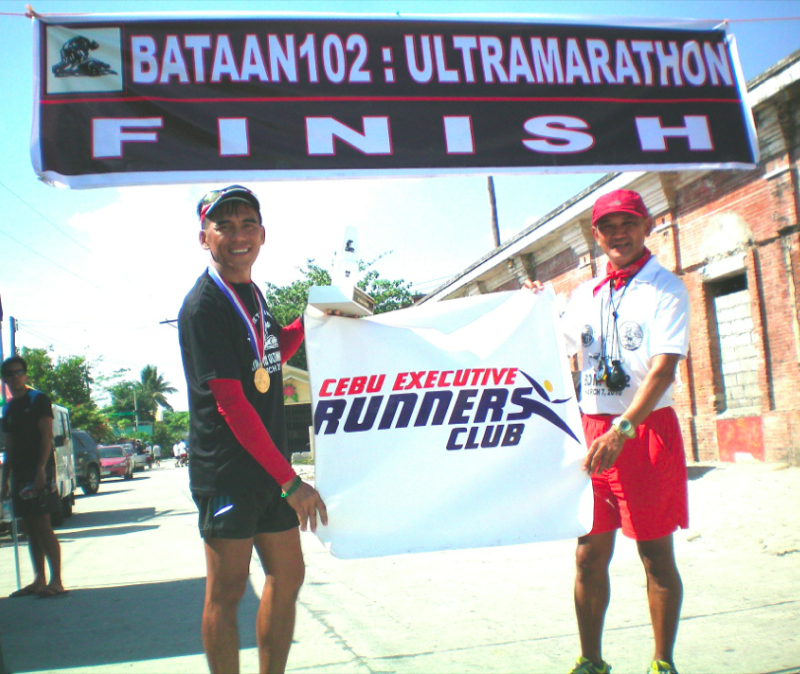