Sarah Monique Ching had never before watched Manny Pacquiao. Not in person, not on TV, not even via a YouTube replay. But that all changed last weekend when Sarah, a freshman on full scholarship studying Economics and Finance at the University of Texas in Dallas, saw Pacman three times: at the open workout, the weigh-in and on the fight night of March 13. Last Thursday, I featured Sarah’s story. Here’s Part 2: 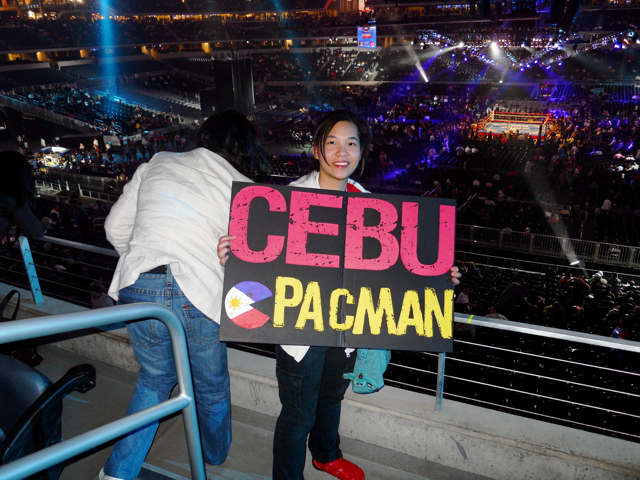 Just a week ago, I didn’t know a thing about boxing and neither did I care for it. On Saturday, it was the only thing on my mind. My uncle picked me up from school and together we went to the Dallas Cowboys Stadium. It’d be the second time I was going to see the architectural marvel, as well as the second time I’d get lost driving there. When we arrived, the streets around the stadium were packed with cars. There were only a few in our designated parking lot so it was a breeze to park. Getting in was a bit of a problem though.  The stadium is so large it has 10 entrances. We were three or four entrances away from the club entrance we were assigned. Security was very lax, though, and I was able to get drinks in. Once I stepped inside, it was fantastically surreal. I didn’t know where to start gawking. The stadium seemed even more colossal from inside. But, I was eager to get to my seat. I had bought tickets for the Club 200 level. The sight lines to the ring were amazing. I looked up and saw the world’s largest HDTV measuring 72 feet tall and 160 feet wide suspended above the ring. The ring and the big screen were in front of me dead center. Oh yeah. Everything was big in Texas. All I could do was sit and take it all in. 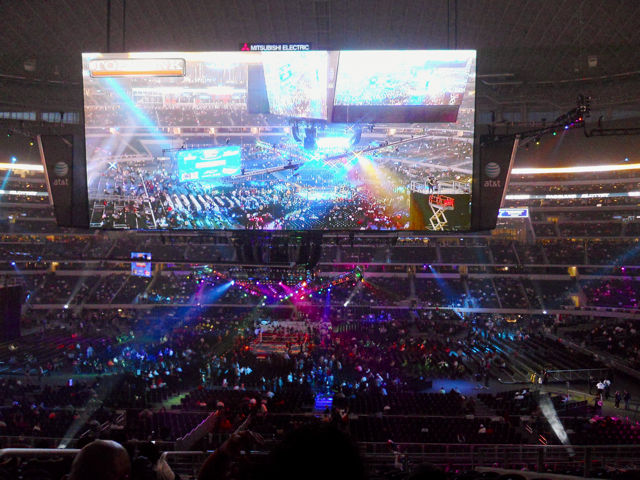 I had the Green Chile Kobe Burger that cost $13. Beer cost $8 a bottle, peanuts were $5, and water was $5. I didn’t have the $60 pizza. Sit back and enjoy the show. The undercard bouts had already begun. After many quick bouts, it was obvious that the crowd was losing interest. One of the more exciting bouts was Soto-Diaz. But even then, the crowd started a wave and it went on for quite a few rounds. Every time Pacquiao’s face appeared on the big screen in between rounds, the crowd would suddenly come alive. Everyone came to watch just one fight.

It felt as if everyone was for Pacquiao. There was going to be no question about who was going to win, only in which round Pacquiao would KO Clottey. Fans wore Philippine flags as capes; others were dressed in all-Pacquiao apparel.

At 8:22 p.m. Soto was declared the winner, there was a sudden change in the atmosphere. The Philippine and Ghanaian flags made their way to the ring. The previous day’s event replayed on the big screen and the fans cheered loud. Arnel Pineda of Journey sang the Philippine National Anthem. I realized it was the first time I had heard it in almost a year. The people continued shouting with pride. The stadium was charged with unbridled excitement and energy. 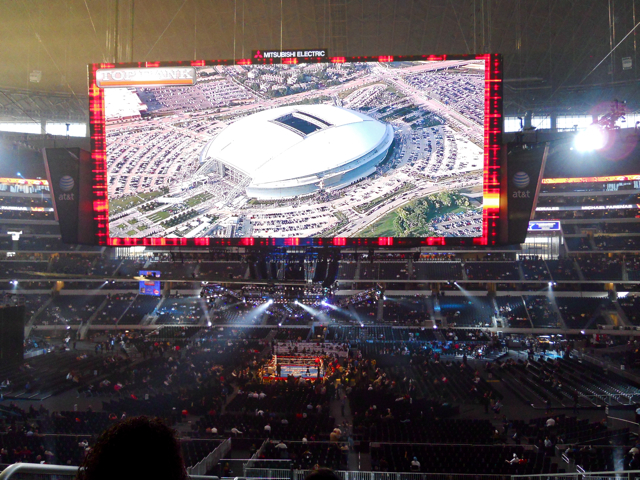 It was time. Clottey entered the ring and was met by loud cheers. But when, Pacquiao made his grand entrance, it was sensory overload. We welcomed him on our feet, cheering at the top of our lungs, fists pumping air.

The first round began and I sat at the edge of the seat waiting to see the two fighters slug it out. No instant action, instead they were both cautiously gauging each other. Clearly, Pacquiao was the aggressor. He put on display once again his amazing quickness. Meanwhile, Clottey remained in his shell. The early rounds went in the same manner. Clottey didn’t open up while Pacquiao kept attacking with a flurry of punches. Clottey did land some hard ones, but it became obvious that the match was one-sided, even to someone who didn’t know much about boxing. It got a little repetitive, and the highlight was in Round 4 when Pacquiao gave Clottey a double-handed punch. Was frustration beginning to set in? 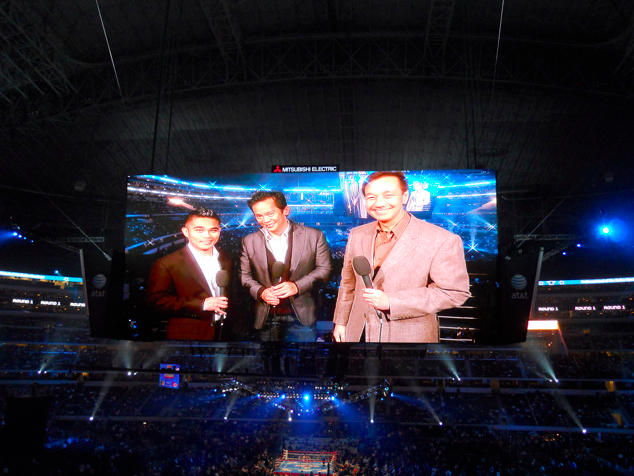 Halfway through, Pacquiao probably realized that Clottey wasn’t coming out. So did I. He dished out exciting combinations for the fans. It wasn’t until the very last rounds that Clottey looked as if he was actually fighting. In Round 11, he got an uppercut in but that didn’t seem to bother Manny. The crowd was up on its feet by the final round. I was still hoping for a knockout. Pacquiao ended the fight with a barrage of punches. BOOM! The entire stadium exploded, louder than ever, as Pacquiao emerged victorious with a unanimous decision.

At the end of fight night, my voice hoarse and shoulders sore from cheering, I went to bed, heart still racing with excitement. I may have never seen Pacquiao fight before, but hey, I get to say that the first time was live together with 51,000 fans in the 8th Wonder of the World. It wasn’t the greatest fight, but it was one heck of a show. National Fist, the fighting pride of the Philippines. I didn’t know what that meant. That night, I not only knew it, I felt it. I witnessed a legend, and he’s made a believer out of me. I was in the same room with him, thrice even. I breathed the same air he breathed. And maybe, just maybe, his sweat nilagput nako. 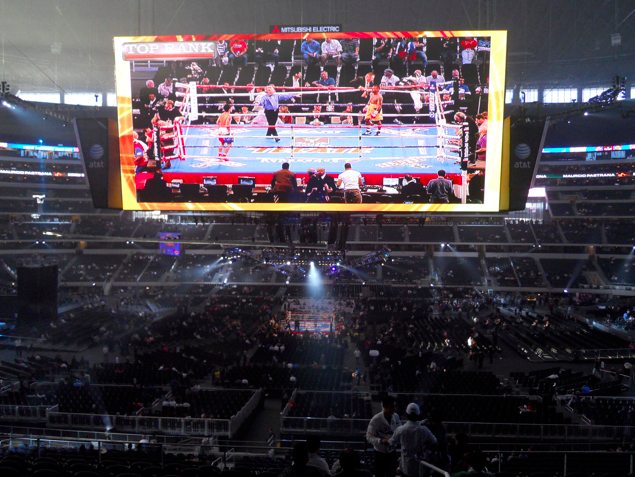