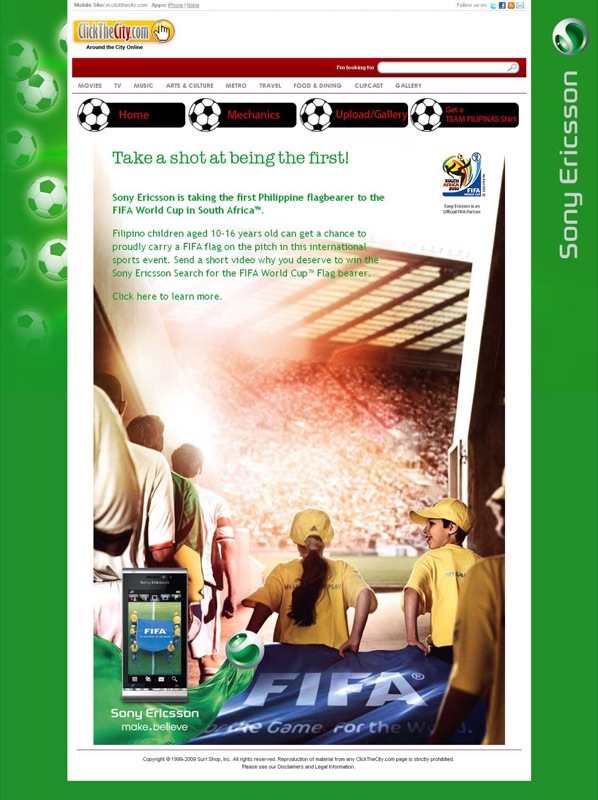 A Filipino child will get the chance of a lifetime to experience the 2010 FIFA World Cup™ live on the pitch in South Africa .  Sony Ericsson has opened a video competition that will bring the country’s first FIFA flag bearer to a FIFA World Cup™ match in July, marking the first time the country will participate in the global sports event.

The competition dares Filipino children aged 10-16 years old to creatively answer in a 30-60 second video, “Why I deserve to win the Sony Ericsson Search for the FIFA World Cup™ flag bearer.”  Act, dance, illustrate, sing or perform your reasons on the video.  Or show off your best football moves to impress the judges.  Get family and friends and play around, do fancy footwork or put on some Shakespeare.  Just remember to have fun and use your imagination.  Contestants can submit as many entries as they want.  Video entries are accepted www.clickthecity/sonyericssonfifa from now until March 5, 2010.

Starting March 8, 2010, five videos will be shortlisted for a new and final round of voting.  The five finalists will each win the Sony Ericsson Kita, the gesture gaming phone wonder with 5-megapixel camera, photo geo-tagging, Net access, high quality media player and stereo speakers.

Sony Ericsson will let the public decide which child should carry the FIFA flag before thousands of spectators around the world in one of international sports’ most exciting events.

The winner, together with his parent or guardian, will fly to South Africa complete with hotel accommodations and pocket money.  In an inspiring moment at the semi-finals, the winner will walk the pitch with other young flag bearers and watch a thrilling FIFA World Cup™ semi-finals match firsthand.

Visit www.clickthecity/sonyericssonfifa to learn more.  Registered voters on the site also get a chance to win the exclusive Sony Ericsson Team Pilipinas shirts..  The winner will be announced on March 26, 2010.