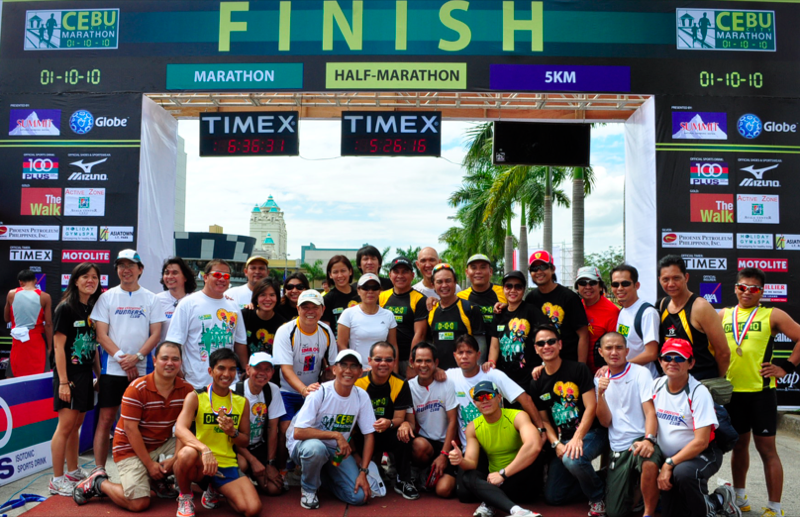 If there’s one lesson I’ve learned from last Sunday, it’s this: Teamwork works. Because as gargantuan the operations were for an event that spanned 42,195 meters in distance involving over 4,258 participants coming from Dumaguete and Australia and Makati and Switzerland and Cagayan de Oro and the U.S. and Bacolod and Slovenia, if a group of men and women bond together and share the same passion, success is achievable.

Teamwork works. So does Selflessness. For, with the organizers behind the marathon—the Cebu Executive Runners Club (CERC)—these words—“sacrifice” and “help” and “love for the sport” and “passion”—are bywords.

Dr. George Evangelista sacrificed. Dr. Tito Macarasig helped. Dr. Albert Santos, who manned one of the 16 pit stops, served 100Plus drinks to the weary and massaged the legs of limping warrior-runners—all for the love of the sport. That’s teamwork. And teamwork works.

Meyrick Jacalan is the man who deserves the loudest of applauses. He designed the mango-shaped Finisher’s Medal—the envy of all 21K runners (you’ll get that next year!). He designed the 01-10-10 website. He designed the shirt. He helped design the layout at the Asiatown I.T. Park finish—which was described by many as ‘world-class.’ He designed this marathon. Last weekend, not a wink he made to ensure that Cebuanos would be proud of their very own “Ato ni ‘bai!” race. That’s sacrifice. That’s help. That’s passion.

Roy and Rosan Trani? This mighty couple—who have finished three 42Ks—escaped from their Talamban home to check-in at a Lahug hotel. Honeymoon Part 2? Yes, maybe. But here’s the correct answer: They were in charge of the first water stop and so they made sure to stay close, wake up as early as 1 a.m. so they’ll be ready to personally hand out water and cheer on the early-morning risers called Runners.

Another man whose eagerness to help is boundless is Bro. Carlo Bacalla. Helping ensure that the 20-km. stretch inside the SRP was water-loaded and entertainment-filled (they had UC dancers, bombastic music, drum-and-bugle artists), Bro. Carlo teamed up with Steve Ferraren, who was the top man in-charge of the SRP. True enough, when I surveyed the smiling runners at the finish, many considered that part as their most enjoyable stretch of asphalted land. Thanks to Steve. Thanks to Bro. Carlo. Thanks to Jun Remo and Jun Quibranza. Teamwork worked inside the SRP.

Perl Jacalan is credited for soliciting the event sponsors. As the top honcho of ASAP Advertising, she is tops at her field and has endless reserves of energy.

There was Jesse Taborada, one of the most indefatigable people I know, who, as president of CERC, spent hours and weeks and minutes on the race.

Councilor Sylvan Jakosalem? Without him, last Sunday would have been this: The Cebu Dangerous Marathon. The reason? Councilor Jack, with the full support of CITOM head Arnel Tancinco, ordered all roads (half of it) along the route closed. Osmeña Blvd. was half closed. So was Mango Ave. Can you imagine 4,258 bodies on the road without the road closure?

Which brings me to Dr. Vic Verallo. He stood at the middle of Gorordo Ave. where he was stationed and nearly got into a fight with a driver who refused to yield to runners. That’s bravery. That’s passion in action.

Joel Juarez? At 2 a.m., he commanded his team of motorcycle marshals to make one final loop around the route. That’s meticulous planning.

Annie Neric with Jane-Jane Ong, Andrew and Nica Ong? To those who enjoyed the live percussionists and the band and the bananas and the Leona’s bread and the fireworks (which surprised everyone at the 4 a.m. start)—now you know who’s behind those.

Thanks to these marathoners—not one or two people but everyone, plus the hundreds more who volunteered on the streets—the dream of many has been fulfilled: to run 42,195 meters in Cebu City.