The year was 1999. That was 11 long years ago. Yet, when I look back at that singular moment–at those few precious seconds–when I got to shake the hand and pose for a photo with an all-time tennis great, the flashback rouses my face to smile.

It was the U.S. Open. Not your ordinary tournament, it was the rowdiest and largest Grand Slam event on this planet. My dad Bunny and I watched the full two weeks, each night and day absorbing an overload of forehands and backhands. On the first evening–on August 23, 1999–we trooped to the Louis Armstrong Stadium for the Opening Ceremony. We were energized. This was New York City. Then, minutes before the start, a small commotion startled the audience.

He entered. “He” happens to be the only player in mankind to have won all four Grand Slam titles (in Australia, France and the U.S., plus Wimbledon) in the same year… twice.

Wearing a green coat-and-tie with a red necklace strap hanging on his neck, his blonde hair was disheveled and his white cheeks glowed pink. Acting quickly, I climbed the steps then waited for that precise opening when I approached from the side, introduced myself as Filipino, then asked for that one-click-I’ll-never-forget-this moment as my dad snapped the photo. 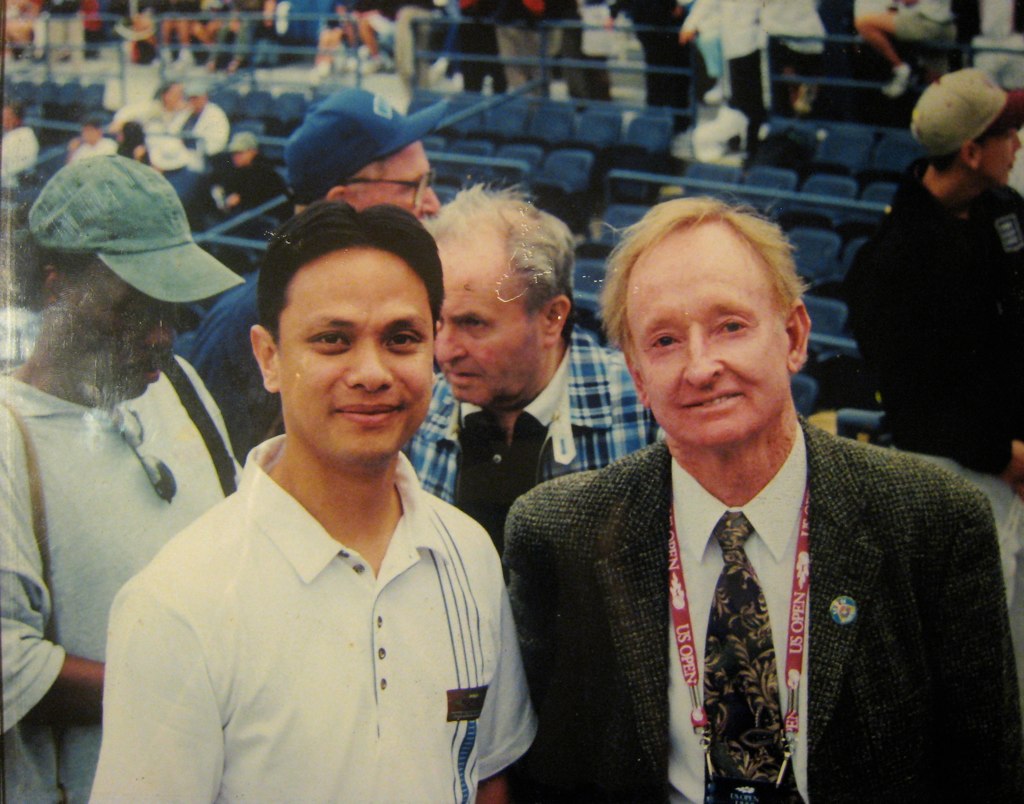 No, he’s not Roger ‘Federer Express’ nor is he ‘Pistol Pete’ Sampras. He’s not Agassi or Becker or Borg or McEnroe. In fact, if you’ve followed tennis as I have–starting the 1980s–his name might not be all-too-famous. But if you know the game’s history, you know him. Even better, if you watch today’s Australian Open, then you’ve seen his name plastered on the TV screen.

Rodney George Laver. Nicknamed “The Rocket” because of his explosive style and named after his hometown of Rockhampton, Queensland, he’s the reason why that August ’99 moment I’ll always cherish. For Rod Laver stood–figuratively–tallest among the giants of the sport when, in fact, he’s only 5-foot-8 1/2 tall. In this era of Juan Martin del Potro (6’6”) and Ivo Karlovic (6’10”), he’s minuscule. Add to the equation his weight (145 lbs.) then you have a “pocket-sized” player. Yet, he’s a rocket. For, in his prime, he possessed a game as complete as Federer’s today.

“Few champions have been as devastating and dominant as Laver was as amateur and pro during the 1960s,” wrote Bud Collins. “An incessant attacker, he was nevertheless a complete player who glowed in backcourt ad at the net. Laver’s 5-foot-8 1/2, 145 pound body seemed to dangle from a massive left arm that belonged to a gorilla, an arm with which he bludgeoned the ball and was able to impart ferocious topspin. Although others had used topspin, Laver may have inspired a wave of heavy-hitting topspin practitioners of the 1970s such as Bjorn Bord and Guillermo Villas. The stroke became basic after Laver.”

Why this R. Laver piece today? Because when you click on Star Sports today, his name is forever etched in Melbourne. The reason? While Wimbledon, for example, has their famous “Centre Court,” the Oz Open’s main stadium is named after it’s greatest… the “Rod Laver Arena.”

For “Rod Laver” is the synonym of “Grand Slam,” which means winning the four majors in the same year. Take Federer: though he’s won all four majors, he did not achieve this feat in the same calendar year. Only four others have accomplished the real Grand Slam, and each achieved it only once: Don Budge (1938), Maureen Connolly Brinker (1953), Margaret Court (1970) and Steffi Graf (1988). The Rocket did this twice, in 1962 and 1969.

As the BBC commentator Dan Maskell put it, he was “technically faultless, from his richly varied serve to his feather-light touch on drop volleys plus a backhand drive carrying destructive topspin when needed or controlling slice when the situation demanded it.”

Sounds like Federer, right? Yes. But with a difference: Laver is left-handed. Which means he has the all-around, no-weaknesses armada of Roger plus the lefty serves and lefty topspin style of Rafael Nadal. Imagine morphing these two to form one? That’s Rod Laver.