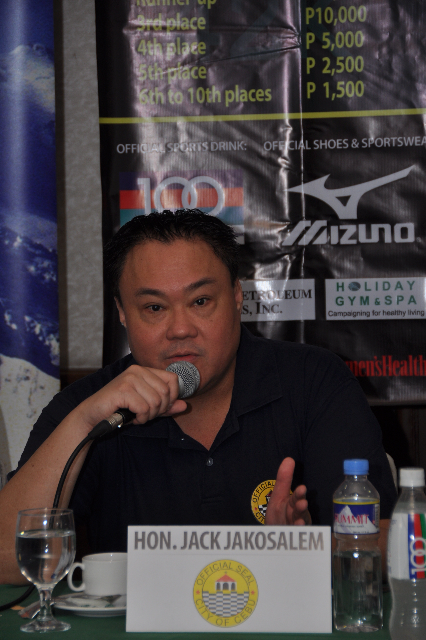 Yes, he’s running! No, not in the elections (he’s on his third term) and no, not the 42K distance (he’s still aiming for that first 5K!), but Councilor Sylvan “Jack” Jakosalem is helping run the upcoming Cebu City Marathon. Thanks to his assistance as the chairman of two city council committees—on Professional Games, Amusement and Sports, and on Transportation—he has helped the organizers tackle the two most fundamental components of organizing road races: Safety and Cash.

Jack organized a series of meetings at his office in the Cebu City Hall and, once, at Bo’s Coffee in BTC, between the CITOM chief, Arnel Tancinco, and CITOM’s Traffic Group head, SP04 Ricardo Hapitan, and the Cebu Executive Runners Club (CERC), represented by Jesse Taborada, Meyrick “Jacs” Jacalan and myself.

Our topic? Road Safety. You see, unlike in Manila where the roads are four-lanes-wide on each side and they’ve got the open space of a Fort Bonifacio to organize races, here in Cebu, our roads are narrow. They’re scary. Many an occasion I’ve had a vehicle, zooming at 80-kph, flying beside me at arm-length’s distance. It’s risky and treacherous.

What if a car kills a runner? I’m sure this will grab headline front-page news. And this near-miss, vehicles-in-close-range scenario is happening every Sunday during each run here in Cebu. As I said, this is perilous.

Good thing Councilor Jakosalem and CITOM head Arnel Tancinco agreed to our request for the closure of one-half of the road of the entire Cebu City Marathon route. This means that, while running, for example, along Osmeña Blvd., the full side of the road beside Cebu Doctor’s Hospital down to Fuente Osmeña down to Cebu Normal Univ. will be closed until 9:30 a.m. How about the South Road Properties, where the 42K participants will run 19 kms.? The entire SRP will be closed until 9 a.m. This is unprecedented. And necessary. For road safety is priority No.1.

The Cebu City government is also contributing P300,000. This amount will be channeled to the bulk of the expenses—the prize money. That’s why, this early, we’ve received feedback that Kenyan runners, possibly numbering 10 or so, will be in Cebu to aim for the 42K first prize of P50,000.

Another priority for the Jan. 10, 2010 marathon? Water. As one who ran three marathons—Hong Kong, Singapore and Quezon City—the importance of hydration is paramount. Last October when Cebuanos joined the Quezon City Intl. Marathon, they ran out of water! Believe me, when you’re salivating in Km. 34 and can’t find something to sip, it’s infuriating! Thanks to Summit Drinking Water—plus it’s counterpart in the sports-drink division, 100Plus—we hope never to run out of water.

Jerry Yntig, the director for external affairs and public relations of Globe Telecom, was accompanied by Trina Poca, whose top position is Trade Marketing Manager for Vis-Min. Globe Telecom, a Presentor to our marathon, is giving away free mobile phones to the winners.

Joy Polloso, the division head of the Ayala Center Cebu, was also with us. Apart from the newly-opened Active Zone of Ayala Center being a major part of the marathon—the registration area is there—here’s another announcement that will delight all participants: Come Jan. 8, the Active Zone will be formally launched to the public. And, during that same night will be the pre-race party and carbo-loading dinner for the runners. All to be held in Ayala Center Cebu. This is terrific news. For, in my recollection, never has there been a race in Cebu that included a pre-race party. More details to follow…

Here’s one more information about the name “Ayala:” we hope Fernando Zobel Ayala himself—a marathoner who finished the New York City 42K—will join us that weekend.

Final update: Practice run inside the SRP on Dec. 20. For details—and to view the designs of the singlet and 42K finisher’s medal—visit the website…