No Filipino athlete, female or male, has ever earned one billion pesos in total prize money in her or his entire career. And here comes a former construction worker who could barely feed himself two meals a day, who finished only his elementary education, who started boxing to lift himself from poverty at the age of 16…. go on to harvest P1 billion pesos. Not in his career. Not in two months or one year. But in 33 minutes, 55 seconds. Computed per minute, that’s P29.42 million. Computed per tick, that’s P491,000 per second. 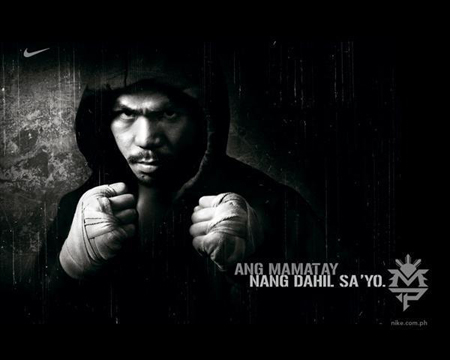 According to Forbes magazine in their July 17, 2009 article entitled, “The World’s Highest-Paid Athletes,” a total of 17 athletes were listed—and only those who earned $30 million or more were admitted to the exclusive list. “Our list of the highest-paid athletes looks at earnings derived from salaries, bonuses, prize money, endorsements and licensing income between June 2008 and June 2009 and does not deduct for taxes or agents’ fees,” said the magazine. “Overall the top 20 earned $789 million, down 1% from last year.”

Tiger Woods, as expected, stood at No. 1. Recently, there were reports saying that he’s the world’s first-ever billionaire. And that’s in dollars—not in pesos. In one year’s time, Tiger was said to have earned a whopping $110 million.

Second on the list is—again no surprise—Kobe Bryant. He raked in $45 million for 12 months. Tying him in that second spot was the man KB24 idolized, Michael Jordan. “MJ retired as a player for the third and presumably final time six years ago, but he is still the most famous athlete in the United States,” said Forbes. “The Jordan Brand is approaching $1 billion in sales for Nike which turned Jordan into a marketing phenomenon.” One final athlete tied the two ballplayers in No.2, Kimi Raikonnen. He also grossed $40 million.

David Beckham sits in No. 5 with earnings of $42 million. “Beckham is far from the best player on the pitch, but he is still the most famous which is why companies like Adidas, Giorgio Armani and Motorola pay him millions for his endorsement,” said Forbes.

Finally, we reach the sixth placers: LeBron James, Phil Mickelson and…. drum roll, please…. our very own, MP. “The highest-ranking of the four newcomers to the list is boxer Manny Pacquiao who earned $40 million over the last year, tied for the sixth most Pacquiao cemented his claim as the world’s best pound-for-pound fighter with convincing knockouts of Oscar De La Hoya in December and Ricky Hatton in May. The two blockbuster fights garnered more than 2 million pay-per-view buys in the U.S. and earned Pac-Man $30 million combined,” said Forbes.

“Pacquiao’s massive popularity in his native Philippines is why companies like Nike and San Miguel beer have signed him to endorse their products. Pacquiao intends to use that popularity to run for political office when his ring career is over.”

Let’s hope our Filipino hero—just like his counterpart, the 2009 CNN Hero of the Year, Efren Peñaflorida—lives up to his name as a true Filipino role model and doesn’t squander his billions on gambling, cockfighting, electioneering, politicking or, with KR, iring-iring.