Zeta Celestino Oliveros Gorres, or “Buchoy” to his close friends and family, is known to us by only one letter: Z. Nine days ago, a terrifying incident happened. At the Mandalay Bay House of Blues—on an eerie Friday the 13th—Z Gorres won his fight but then collapsed. Z was in Zzzzs. He was in a coma. His condition was critical. Would Z survive? The Filipinos awaited, both anxious and prayerful. 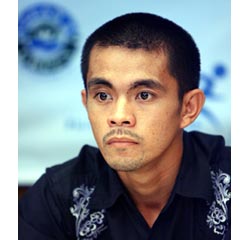 That was then. Today, we know Z is in stable condition. Yesterday morning, I spoke to Antonio Lopez Aldeguer. “Z is progressing rapidly. Remarkably well,” said Aldeguer. “Michael (ALA’s son) is monitoring him day to day. To summarize his recovery in one word, it’s remarkable.”

ALA knew about Z’s collapse seconds after it happened. “Michael called me right away. At first, we thought it was over-fatigue. It wasn’t the case. I knew it was worse when he was in the Coma Center. I was very, very worried. As you know, I’ve had lots of incidents in the past. From other boxers. What gave me confidence was that Z was in the hospital’s trauma center that is one of the best in the world. And the physician operating on Z was a top surgeon. As you know, Las Vegas has probably, in the whole America, the highest rate of coma incidents.”

Did the thought of Z possibly not making it enter your mind? “Not even for a moment. I did not entertain the idea. Maybe because of my strong faith in God. But what came into mind what was, ‘What am I supposed to do? Should I quit boxing?’ And those thoughts have come to mind several times in the past… When Z lost a bad decision before, in our own backyard. When Boom-Boom was knocked-out in the first round. When Banal quit when he was way ahead. And now, this, to Z.

“But what strengthened me was when I realized, ‘If I quit, it’s because the reason is selfish. I’m thinking only of my sentiments. That I’d be relieved of my responsibilities, of the stress, of losing money, that all this doesn’t pay off.’ But then I asked myself, What is all this for? I know I love boxing. And when I weighed things, I knew the answer was no. I couldn’t quit. How about boxers who’ll come to me and ask, ‘How about us, sir? What will happen to our dreams?’

“I also never doubted God’s grace. The outpouring of sentiments was amazing. We never expected it to be this way. We were getting a lot of sympathies and consoling words from so many people. The one factor that sustained us all, that sustained Z, was the millions who prayed for him. Even the doctor said it was miraculous. For most people, it may take months to respond. For Z, it was days.

“We all gathered in Sto. Niño Church that Saturday afternoon when Z was in critical condition. The boxers, the employees. We were surprised to find a TV crew there; I don’t know how they knew. We prayed. The next day, Z’s wife, Datches, and the others went to Simala. Everybody prayed. The nation prayed. Then, last Tuesday, we had a Thanksgiving mass because at that stage we knew Z was removed from serious condition.”

Z started with ALA when he was only nine. “His elder brother, Jun, was already with me as a boxer. And so it was natural for Z to follow. Z stayed with us in our home in Ma. Luisa. He grew up with us while studying in Banilad Elem. School, in UV Mandaue and for college in UV,” he said.

“Every boxer, athlete, has tantrums. There are times when mang luod-luod. When a boxer is reducing his weight, he’s not eating normally and it upsets his mood. But, in all of my years of training, I have never seen Gorres get mad. Not even once. He’s always smiling.

“Also, his character. To me, in my dealings with people, if I hear someone talk bad about another, I lose respect for that person. With Z, I never heard him say anything bad about anyone. He is good, kind, gentle. He’s quiet. Respectful. And you should see his children and wife… they’re all well-dressed, clean. Z is one of a kind. And so, whenever I get asked about Z, I don’t emphasize on his boxing. There are plenty of good boxers. I emphasize on Z as a good person.”